As primary voters head to the polls in New York, Kentucky and Virginia, they face long lines, even as President Trump continues to attack mail-in voting, falsely claiming it leads to fraud. Kentucky has reduced the number of polling places from 3,700 to just 170 — a 95% reduction. “There’s the potential for record turnout,” notes Cliff Albright, co-founder and executive director of Black Voters Matter, despite such suppression tactics.

AMY GOODMAN: This is Democracy Now!, democracynow.org, The Quarantine Report. I’m Amy Goodman, with Juan González. Three states are holding primaries today: New York, Kentucky and Virginia. In Kentucky, voters could face very long lines as the state slashed the number of polling places from 3,700 to just 170 — a 95% reduction. In Louisville, Kentucky’s largest city, only one polling place is open.

The most closely watched race is the Democratic primary to pick a candidate to challenge Senate Majority Leader Mitch McConnell in November. Progressive candidate, Kentucky state Representative Charles Booker has seen a major boost in polling and received high-profile endorsements from Senators Elizabeth Warren and Bernie Sanders, as well as Congressmember Alexandria Ocasio-Cortez, who’s running, herself, in New York. Booker hopes to beat out former Marine fighter pilot Amy McGrath, who has outspent Booker on ads, $14 million to $1 million. She spent the $14 million. This comes as Trump again attacked mail-in voting yesterday, falsely claiming it leads to fraud. He tweeted, “Because of MAIL-IN BALLOTS, 2020 will be the most RIGGED Election in our nations history.”

Well, for more, we’re joined by Cliff Albright, co-founder and executive director of Black Voters Matter. He’s normally based in Atlanta, Georgia, but is joining us from the road, just outside Nashville, Tennessee, en route to Louisville, Kentucky, where voters are going to the polls today. He recently co-authored a piece in The New York Times headlined “Georgia Set Up a Polling Place in a Nursing Home: And other horror stories from a voting meltdown.”

Cliff Albright, thanks so much for pulling over to be safe. Talk about what’s happening in Kentucky today. Is this possible: 3,700 polling places before, today only 170?

CLIFF ALBRIGHT: Yes, unfortunately, it is possible, and it’s happening right now. And, you know, that’s not an equal decline that we’ve seen. You know, what we know is that in Jefferson County, the largest county and the county that has half of the state’s Black population, that the number of polling locations was actually brought down to one — one polling place serving the entire county, estimated 600,000 — over 600,000 registered voters.

JUAN GONZÁLEZ: And in terms of the projected vote totals, from previous elections to now, are people expecting a significant drop in the total votes as a result of reduction in polling places? Because many people will not end up doing mail-in ballots.

CLIFF ALBRIGHT: Exactly. And that’s part of the problem. So, the first part of your question, in terms of the expected drop, actually, there’s the potential — there’s potential for record turnout. What they’re saying is that there’s over 200,000 ballots that were sent out to folks that requested the mail-in ballot. That, combined with the number of folks that have actually already early voted, puts them at a number that basically could exceed even 2008, which is what we saw happen in Georgia, right? In spite of all of the mess that took place and the voter suppression that took place, that you still saw a record turnout in Georgia. And so, there’s really potential to have something similar take place in Louisville, in particular, but throughout the state of Kentucky.

JUAN GONZÁLEZ: And you mention Georgia. Clearly, if you could talk a little bit about the meltdown that occurred there, and also the fact a lot of people don’t understand that, yes, many states have gone to mail-in voting, essentially mail-in voting, but the mail-in voting process is a lot more complicated than it is going to the polling place and just choosing your candidates or sticking your ballot through a machine, isn’t it?

You can have a state that says, “OK, we’ll do vote by mail,” but there are many ways, there are many pitfalls in how it gets done, that can still create voter suppression, in fact, even larger-scale voter suppression than in a normal election. There are still issues over who gets sent the ballots, over what excuse even qualifies for you to use a mail-in ballot, or you still have states that are fighting against — like states like Tennessee, where I’m at right now, with states that are fighting against coronavirus even being an allowable excuse to do vote by mail. You’ve still got issues in terms of when does the ballot have to receive: Is it a received-by date, or is it a postage date? You’ve got questions over signatures, right? In fact, one of the problems we’re hearing in Kentucky right now is that there are some voters who didn’t know that you have to sign in two places, and because of that, those ballots aren’t getting counted. And then you’ve got the signature match issues, which they also have in Kentucky, which says that your signature is going to be — your signature on the mail-in ballot is going to be compared with the signature that they have on file, which could be 10 years old or 20 years old, right? So, you’ve got all these different areas where voter suppression can creep into the vote-by-mail system. So, when done properly, it can be a great alternative to keep our communities safe, but it is not exempt from voter suppression.

That’s what we saw happen in Georgia, where the reality is, much of the lines that we saw in Georgia, it was a combination of many issues, but one of those issues is that you had many people that wanted to vote by mail but were not able to, either because of a postage issue — the state didn’t provide postage — or some other aspects. The state had incorrect directions in the mail envelope with the vote-by-mail ballot. And so, some of those lines — and again, we’re talking about four-hour, five-hour, six-hour lines. Some of that was caused by the fact that some people wanted to vote by mail, and simply weren’t able to.

AMY GOODMAN: So you have five states that fully vote by mail: Colorado, Hawaii, Oregon, Washington and Utah. You have President Trump, after his catastrophic rally in Tulsa, in the midst of COVID, immediately tweeting, you know, the elections in November are going to be a fraud because of mail-in voting. He votes mail-in. Jared Kushner, his senior adviser and his son-in-law, and his daughter Ivanka Trump vote mail-in. The military has voted mail-in since the Civil War. Cliff Albright, if you can talk about what needs to be put into place in order for more people to have that access by November? And then, also, these incredible dangers during the time of the coronavirus, like the headline on your New York Times piece, “Georgia Set Up a Polling Place in a Nursing Home,” what could be more of a superspreading event?

CLIFF ALBRIGHT: Yeah. I mean, first of all, whenever you hear Trump talk about vote by mail being fraudulent, we always have to remember what his biography co-writer said about him, that whatever criticism he lays, he’s just projecting on himself — from himself. And so, what we know is that Trump said himself how he feels about this issue: If voting was expanded, if we do this widescale vote by mail, Republicans will never be able to win. He said it, right? Mitch McConnell said the same thing when Democratic legislation was trying to put in provisions to expand vote by mail, or even before coronavirus, when they were just trying to restore and strengthen the Voting Rights Act, Mitch McConnell says, “Oh, we’ll never be able to win another election.” In Georgia, the Republican speaker of the House said the same thing.

So they’re not even trying to hide what their real motivations are. Whenever they talk about voter fraud, what we know is all they see is their power and being able to hold onto their power. This notion of democracy is just a cute, little idea that they have. But when it comes down to their power, if they need to weaken democracy or attack democracy, they’ve shown that they’ve been willing to do that, Georgia being a perfect example with the current secretary of state, who really had three months, three extra months, to prepare for that election in Georgia. The election was delayed not just once, but twice, from March to June, and he still couldn’t get it right. But it’s not just incompetence. It’s incompetence combined with intentional suppression.

JUAN GONZÁLEZ: And, Cliff Albright, I’m wondering if you could comment briefly on the actual race in Kentucky that is occurring, two Democrats seeking to get the nomination to challenge Senate Majority Leader Mitch McConnell in November. Amy McGrath was the Democratic establishment candidate. She was expected to cruise to victory, but suddenly Charles Booker has had a huge surge, representing, in essence, the left wing of the Democratic Party. Your sense of what has happened there in Kentucky?

CLIFF ALBRIGHT: Yeah. I mean, I think what you’ve seen is that, you know, Booker got into the race a little bit late, and so he had to build up some momentum. And he was doing that, talking about these issues at the center of his campaign. And then, of course, everything that’s happened over the past three, four weeks in terms of police violence and the protests, and it’s just created this energy, which hasn’t caused him to have to change his message, right? It’s just that his message is now getting more attention. And then you contrast to McGrath, who has literally been invisible throughout these three, four weeks of protest.

And so, there’s an incredible wave that’s taking place, and a lot of folks that are just finding out about Booker and his campaign. And, you know, we really think, again, when you look at the numbers and you look at the number of folks that have either early voted or requested the ballots, there’s really potential for Kentucky to really shock the country in terms of its Democratic primary today.

AMY GOODMAN: And, of course, we’ll follow the results tomorrow, see what happens. Cliff Albright, thanks so much for pulling over to the side of the road to speak with us, co-founder and executive director of Black Voters Matter, speaking to us from Tennessee on his way to Kentucky.

Up next, we will speak with a Black Lives Matter protester who was in Dallas when police shot him with a so-called less lethal bullet. He lost his eye. Stay with us. 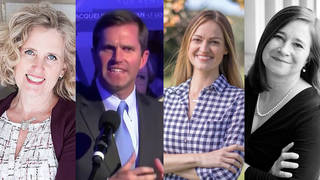