“The Games Will Not Go On”: Pro Athletes Strike for Black Lives, Bringing Leagues to Grinding Halt

Professional athletes are taking part in unprecedented collective action in support of the Black Lives Matter movement and against police violence, bringing basketball, baseball and soccer leagues to a grinding halt. The protests and calls to recognize systemic police brutality also extended across tennis arenas. Dave Zirin, sports editor for The Nation and host of the “Edge of Sports” podcast, says the actions constitute “a sports strike wave” for racial justice. “It’s more than a boycott. It’s them withdrawing their labor,” Zirin says. “It’s not just an example for racial justice protesters around the country. I think it’s a challenge to the labor movement as a whole.”

AMY GOODMAN: This is Democracy Now! I’m Amy Goodman. In a remarkable development Wednesday, professional basketball, baseball, soccer games came to an unprecedented halt, after Milwaukee Bucks players refused to take to the court for a playoff game against the Orlando Magic in support of Black Lives Matter. The NBA then canceled all three of Wednesday’s playoff games. Then, on TNT, former basketball star, the sports commentator Kenny Smith walked off the set of Inside the NBA in solidarity with the protesters.

KENNY SMITH: As a Black man, as a former player, I think it’s best for me to support the players and just not be here tonight, and figure out what happens after that. I just don’t feel equipped to do that.

ERNIE JOHNSON JR.: And I respect that.

AMY GOODMAN: You then can’t hear him much because he’s taken off his microphone, and he walks off the TV set. The women’s WNBA also canceled three games Wednesday after members of the Washington Mystics arrived wearing T-shirts, each with seven holes, symbolizing the seven bullet holes, in the back of their T-shirts, with the fronts of the T-shirts spelling out the name Jacob Blake, each woman wearing a T-shirt with one of the letters of Jacob Blake’s name. This is Mystics guard Ariel Atkins.

AMY GOODMAN: Three Major League Baseball games were postponed after players on the Milwaukee Brewers, Seattle Mariners and other teams joined protests. Mets slugger Dominic Smith kneeled for the national anthem ahead of Wednesday night’s game against the Florida Marlins and broke down in tears at a post-game press conference. Most of Wednesday’s Major League Soccer games were postponed. And the Western & Southern Open tennis tournament suspended matches after tennis superstar Naomi Osaka, whose father is Haitian, withdrew to protest against racial injustice.

For more, we’re joined by Dave Zirin, sports editor for The Nation magazine, host of the Edge of Sports podcast.

Welcome to Democracy Now! This is an amazing moment in this country’s history, especially as, interestingly, yesterday, though Vice President Pence — it was talked about that he would condemn athletes for taking the knee. Forget taking the knee at this point. Athletes are not taking to the courts. They’re not going out on the field. They are boycotting, Dave.

DAVE ZIRIN: Yeah. It’s great to be on with you and talk about what I think is best described as a sports strike wave for racial justice. It’s more than a boycott. It’s them withdrawing their labor and taking money out of the system and saying the games will not go on. It’s not just an example for racial justice protesters around the country. I think it’s a challenge to the labor movement as a whole to say, if this country is in fact nonfunctioning at the moment — and many believe this is not a functioning country — then labor has to assert itself in this battle and stand up. And that’s exactly what the athletes are doing with this sports strike wave.

AMY GOODMAN: NBC is reporting a group of athletes led by LeBron James are rolling out a multimillion-dollar program in the next few weeks to recruit poll workers in heavily Black electoral districts for the November election, a person familiar with the plan says. And didn’t LeBron walk out of the bubble with others, and they’re going to Washington to protest?

DAVE ZIRIN: Yeah, LeBron is a big part of this story right now, because yesterday all the NBA players had a meeting after the games were canceled inside this bubble, this hermetically sealed bubble down in Orlando, Florida, and the Los Angeles Lakers and the Los Angeles Clippers — and LeBron is on the Lakers — they broke with the rest of the players and said, “We don’t want the playoffs to continue.” Now, this could be a negotiating tactic, because they’re meeting with the NBA bosses today, the franchise owners. They’re called the franchise governors. And they’re going to be speaking with them about what NBA owners can do to put their billions of dollars towards the cause of racial justice. And so, there still might be NBA playoffs, but right now LeBron is leading a very radical break from the players as a whole to wrest more reforms out of the NBA.

AMY GOODMAN: So, Dave, as we wrap up right now, just the significance, from the WNBA to the NBA to the much whiter baseball teams —

AMY GOODMAN: — all being in solidarity? What do you think this means, and for President Trump, who has made it a point at almost every speech to condemn anyone who takes a knee?

AMY GOODMAN: Thank you so much for being with us. The Milwaukee Bucks read a team statement explaining their decision to boycott their playoff game against the Orlando Magic. We’re going to play just a short clip of Sterling Brown and point guard George Hill.

STERLING BROWN: Despite the overwhelming plea for change, there has been no action. So, our focus today cannot be on basketball.

GEORGE HILL: When we take the court and represent Milwaukee and Wisconsin, we are expected to play at a high level, give maximum effort and hold each other accountable. We hold ourselves to that standard. And in this moment, we are demanding the same from lawmakers and law enforcement. We are calling for justice for Jacob Blake and demand the officers be held accountable.

DAVE ZIRIN: Just a final comment is that Sterling Brown, who spoke there, has his own lawsuit against the Milwaukee Police Department from when he was tased in 2018. So the players are not bystanders to this process. The players are looking at this world and saying what John Carlos said in 1968 before the Olympics, which is, “Why should we run in Mexico City only to crawl home?”

AMY GOODMAN: Dave Zirin, sports editor for The Nation magazine, host of Edge of Sports podcast, thanks so much.

When we come back, we hear part of Vice President Pence’s acceptance address at the Republican National Convention. Stay with us. 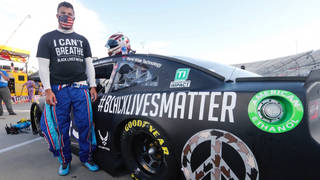