Canadian police continue to arrest Indigenous land defenders blocking construction of Coastal GasLink, a 400-mile pipeline that would carry natural gas through Wet’suwet’en land. Police arrested two people Monday for blockading an access road, less than two weeks after arresting more than 30 in a violent raid on Coyote Camp and elsewhere that ended a 56-day blockade of a drilling site. We get an update from Wet’suwet’en land defender Molly Wickham, also known as Sleydo’, just released from jail. “This is the third time they have come in and raided Wet’suwet’en territory,” says Wickham. “We’ve never signed any documents to cede our land.”

AMY GOODMAN: Members of the Haida Nation, performing last week after they brought medicines, food, supplies to the Wet’suwet’en land defenders in British Columbia. This is Democracy Now! I’m Amy Goodman, with Juan González, as we end today’s show with an update on the land defenders in Canada who are facing a government crackdown, two people arrested Monday after blockading an access road used by Coastal GasLink to build a 400-mile pipeline within Wet’suwet’en land that violates both Indigenous and Canadian laws. This comes after Canadian heavily militarized federal police arrested about 30 Wet’suwet’en members and supporters at camps and roadblocks in the same area last week, including a violent raid that ended a 56-day blockade of the drilling site. One of those arrested in the raid on the Coyote Camp was documentary filmmaker Michael Toledano, who shared this dramatic footage of the raid.

SHAY LYNN SAMPSON: They’re walking to the door. They’re breaking it down.

POLICE OFFICER: Get out here.

MICHAEL TOLEDANO: Breaking down the door.

POLICE OFFICER: Show me your hands.

POLICE OFFICER: Show me your hands.

MOLLY WICKHAM: Get your [bleep] gun off me! This is sovereign Wet’suwet’en land!

POLICE OFFICER: Step away from the door.

SHAY LYNN SAMPSON: The RCMP have breached the door. They are acting under the authority of the injunction.

MOLLY WICKHAM: The attack dogs are there.

MOLLY WICKHAM: Standing there, right beside the door.

SHAY LYNN SAMPSON: Militarized police. They used axes found in camp to break down the door.

UNIDENTIFIED: And a chainsaw.

SHAY LYNN SAMPSON: And a chainsaw that they found in camp to break down the door.

MOLLY WICKHAM: Do not touch me.

SHAY LYNN SAMPSON: Get your hands off of her!

SHAY LYNN SAMPSON: Get your hands off of her!

POLICE OFFICER: Hands on your back. This way, Molly.

AMBER BRACKEN: For the record, I’m a member of the media. You’ve been notified that I’m here. I’m an observer.

POLICE OFFICER: Put the camera down.

MICHAEL TOLEDANO: I’m a member of the media. I am filming a documentary for CBC Television.

AMY GOODMAN: Dramatic footage of the violent raid on Coyote Camp. Among those arrested and who we heard in this video was Molly Wickham, also known as Sleydo’, land defender, matriarch of the Gidimt’en Clan of Wet’suwet’en Nation, leader in this protracted battle to protect the land. She joins us now again.

Molly, you were just released from jail last week. The cabin where we spoke to you from two Fridays ago was burned to the ground? Explain what happened in this raid. And we heard you saying, “Get your bleeping gun off me.”

MOLLY WICKHAM: Yeah. So, the CIRG team of the police, the specialized group of RCMP to deal with specifically industry and Indigenous land defenders, surrounded our camp with tactical teams that they dropped in helis. They had canine units, semiautomatic weapons. And they broke down the door without a warrant, an arrest warrant or a search warrant, and came into the tiny house that we were at and used axes and chainsaws and held us at gunpoint and arrested seven people inside and then four people at the cabin that they later burned down. They bulldozed the entire camp, and CGL was present at the raid.

JUAN GONZÁLEZ: And, Molly, could you talk about this branch of the Royal Canadian Mounted Police? They call it the Community-Industry Response Group? What is this? A protection outfit?

MOLLY WICKHAM: Yes. So it’s basically this rogue group of police that work for private industry. They are directed by private industry. The government has claimed no oversight or direction towards this particular group of police that come in and do — this is the third time that they’ve violently raided Wet’suwet’en territory. They don’t have the same accountability as other police do, and they take direction and were using CGL vehicles for the arrests, for the raid. They were staying at the man camps with CGL. They had put up an exclusion zone that they were letting only CGL through and blocking all Wet’suwet’en, even our house chiefs, from the territory during the raids.

AMY GOODMAN: And, Molly, if you could talk about, again, why you are there, this bigger struggle that is taking place?

MOLLY WICKHAM: The Wet’suwet’en hereditary chiefs have never ceded or surrendered our territory, and so they still have title to our land. We don’t have treaties. We’ve never signed any documents to cede our land. And they said that there is no pipelines within our system to go through Wet’suwet’en territory. Wedzin Kwa is our sacred headwaters where our salmon spawn. It’s the last clean drinking water source in our territory. And they are about — Coastal GasLink is about to drill underneath our headwaters.

JUAN GONZÁLEZ: And who owns Coastal GasLink? Could you talk about their corporate connections?

MOLLY WICKHAM: Yes. So, they’re owned by TC Energy. They are partly owned by AIMCo, which is an investment firm in Alberta that actually holds our CMP police retirement funds, and by KKR, which is a private equity firm in the United States, as well.

AMY GOODMAN: And what are you demanding right now?

MOLLY WICKHAM: We’re demanding that Coastal GasLink get off our territory and that the governments come to the table with the Wet’suwet’en and actually start implementing and respecting our title to the territories. This is a larger issue that could have easily been resolved if implementation of our title was recognized, if our governance system was recognized. Instead, the government is choosing to take direction from a private corporation to come in and destroy our lands and our waters, and they’re using militarized RCMP against unarmed Indigenous women on our territories and removing us from the territory.

One of the conditions of my release was that I am restricted from accessing my territory. Coastal GasLink wanted to ban me from my territory completely, which is a violation of our Section 35 rights under the Constitution and, of course, a violation of Wet’suwet’en law. They successfully banned my husband from our territory other than to come to our home, directly to and from our home, which prevents us from hunting, fishing, doing anything on our territory, getting firewood. And they banned everybody else who was arrested from our territory, claiming terra nullius, essentially, that we don’t have a community out here, that we don’t have any infrastructure, and that there’s no —

AMY GOODMAN: Molly Wickham, we have to leave it there, but we’ll continue to follow this struggle. Thank you so much. I’m Amy Goodman, with Juan González. Stay safe. 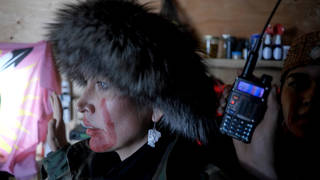