The Biden administration is facing criticism from human rights groups after it announced this week it will leave in place a Trump-era policy to allow military commanders to use landmines across the globe. A Pentagon spokesperson described landmines as a “vital tool in conventional warfare” and said restricting their use would put American lives at risk, despite Biden’s campaign promise to promptly roll back Trump’s policy. Jody Williams, recipient of the 1997 Nobel Peace Prize for her work with the International Campaign to Ban Landmines, says landmines were invented “in order to maim people” and have a devastating impact on children, women and the elderly around the world. “It is an indiscriminate weapon that has no place on this planet.”

The Biden administration is facing criticism from human rights groups for leaving in place a Trump-era policy allowing military commanders to use landmines across the globe. On Monday, a Pentagon spokesperson issued a statement describing landmines as a, quote, “vital tool in conventional warfare” and said restricting their use would put American lives at risk. Amnesty International criticized the Biden administration’s stance, saying it’s “deadly and dangerous.”

STANLEY BROWN: So, right now that policy is in effect, as you all know, and we haven’t had any discussions yet in the administration on changing the policy. So, basically, it removed the geographic restriction of Korea, and now geographic commanders can decide the use of landmines, which is a pretty high bar. So, no decision has been made, and no study has been done yet.

AMY GOODMAN: So, the next day, on Tuesday, as criticism grew over the issue, Pentagon Press Secretary John Kirby claimed the military is now reviewing the Trump policy. As a candidate, Joe Biden had vowed to promptly roll back what he described as Trump’s “deeply misguided decision.”

We’re joined now by Jody Williams. She won the Nobel Peace Prize in 1997 for her work with the International Campaign to Ban Landmines. She led the organizing efforts for the landmark Mine Ban Treaty, which prohibits the use, production, transfer and stockpiling of anti-personnel mines. More than 160 nations have signed the treaty, but the United States has refused to. Jody Williams is also co-founder of the Nobel Women’s Initiative. She’s joining us from Fredericksburg, Virginia.

Jody, welcome back to Democracy Now! There’s a new administration, but, as of Monday, they said they weren’t changing the policy. Then, because of great outcry around landmines, on Tuesday they said they would review it. Talk about the U.S. and landmines.

JODY WILLIAMS: Well, as you know — and thank you for having me back. It has been a long process trying to get the United States to join 164 nations and join the treaty. It’s perplexing, to say the least. The U.S. has not used, it hasn’t exported, it hasn’t produced for decades. There have been multitudinous reviews under various presidents. So, to have President Biden decide now to have another review is quite mind-boggling. And it is, as Amnesty and others said, a deadly and, I would say, retrograde policy to not immediately move back to the Obama position.

NERMEEN SHAIKH: Jody Williams, can you explain what the effects of these landmines are and who — what groups are most vulnerable? Children are, in some places, one in five people who are injured by landmines, and up to 85% of children who are injured by landmines die before they reach the hospital. Could you talk about that, why that’s the case, why children are the most vulnerable, and in what countries landmines are the most widespread?

JODY WILLIAMS: Sure. Landmines were invented, if you will, in order to maim people. The thought behind that was if you had a unit of soldiers and a soldier stepped on a mine and got blown up, it would upset — freak out — the rest of the soldiers in this unit. It would take more blood, more operations to help that person.

So, when you think about children, how small they are — and stepping on a landmine or picking it up has a devastating effect on kids, older people, women. It is an indiscriminate weapon that has no place on this planet and no place in the ground, in riverbanks where women go and wash clothes, areas where kids play. The fact that President Biden had said he would immediately turn back Mr. Trump’s confused policy and is now having another review is very disturbing.

Mines are being used now still in Afghanistan, also in Myanmar, a few other countries. I think it’s about five these days. But many countries are still clearing the mines that had been laid decades ago. It’s a tedious and long-term process to clear landmines.

NERMEEN SHAIKH: And in addition to the U.S., Jody Williams, of course, there are other countries that have refused to sign the so-called Ottawa Convention, which limits the use of landmines. Could you explain — talk about what those countries are and where it’s known that those countries have deployed landmines, among them Russia, China, India, Pakistan, etc.?

JODY WILLIAMS: It is true that they have not signed. On the other hand, the pressure of the stigmatization of landmines has had an impact on their policy, except for Pakistan and India. China stopped producing for export back in the '90s. Russia has not used them or exported them, either. And this is one of the reasons, when we talk about ban treaties, that they're so important, is that when the whole world, in essence, is saying that a weapon is illegal, indiscriminate, should be banned, the pressure on countries that don’t sign is significant. When India and Pakistan, when their relations get more tense, sometimes along the border they place mostly anti-vehicle mines. But when tensions go down, they remove them. At least they do that. But they should join the treaty, too.

AMY GOODMAN: As a presidential candidate, Joe Biden vowed last year to reverse Trump’s policy. In February of 2020, Biden issued this statement to Vox. He said, “The Trump administration’s reversal of years of considered decisions by Democratic and Republican presidents to curtail the use of landmines is another reckless act by a president ill-suited to serve as commander-in-chief. It will put more civilians at risk of being injured by unexploded mines, and is unnecessary from a military perspective. As president, I will promptly roll back this deeply misguided decision.” That was Joe Biden a year ago. So, how do you have then, on Monday, the Pentagon spokesperson defending the continued use of landmines, and then, because of outcry on Tuesday, the Pentagon says, “OK, we’ll review this”?

JODY WILLIAMS: Certainly is a contradiction and something that those of us who have fought against landmines for decades do not understand. It was fully expected that President Biden would roll back the policy fairly immediately.

I’ve been reading some of the statements of others about it, and Senator Leahy from the great state of Vermont still contends that Biden will reverse the policy. I would suggest to Senator Leahy and others who support banning landmines that they pressure him to do it now and not do another military review. When I heard about the review, I actually — “laugh” is not the right word, but I was, like, totally confused, because it’s been reviewed time and time and time again. How many more reviews does one need to do to know that those weapons have no place on this planet?

AMY GOODMAN: Let me ask you something, Jody. Right now there’s this issue of landmines. The U.S. won’t sign onto the treaty and says it will continue the policy that Trump promoted, so landmines can be placed beyond Korea. And that’s another question: Why even in Korea? And at the same time, you have the U.S. being criticized by so many countries around the world for blocking agreements that would allow countries to get vaccines cheaply. So, the U.S. will not be a part of ensuring the world can get vaccines, but stands there with those who are pushing landmines around the world.

JODY WILLIAMS: It is mind-boggling. Again, I can’t quite imagine what President Biden is thinking. It is seriously confusing. Let me say, though, the U.S. Campaign to Ban Landmines is putting tremendous pressure on the president and everybody in the administration to change that policy.

You know, the U.S., under Mr. Trump, as we all know, tried to withdraw from every international treaty, especially those dealing with weapons. And Mr. Biden had talked about multilateralism and working with the world community and bringing us back into, you know, the international community in a leadership role. You cannot lead from the rear. If you want to really be a leader, you need to deal with the global community, not just your own. So, hopefully, our pressure will get him to change his mind and ban them now.

AMY GOODMAN: Finally, you deal with the issue of killer robots. We don’t have much time, but we don’t want to skip over this critical area that not a lot of people know about. What are killer robots, and what’s happening with them now?

JODY WILLIAMS: Killer robots are a marriage of artificial intelligence and lethal weapons. You take the drone that can fly on its own, at least there is still a human being who sees the target and makes the decision to hit the target. A killer robot has no human being in the loop. They are programmed. They are set free. And then they make the life-and-death decision over human beings — a machine. Some in the campaign have called it death by machine. It’s terrifying.

The U.S. has already tested some intelligent munitions that can communicate with each other once they’ve been fired from an aircraft. And I honestly cannot understand the moral and ethical position of this country that it is OK to allow machines to kill people. It’s mind-boggling.

AMY GOODMAN: We just have 30 seconds, but you wrote, “Why do we glorify violence and war and make peace seem the folly of fools?”

JODY WILLIAMS: I think about that all the time. You make a lot of money in war. Peace seems like something for, you know, feather-headed liberals and tree huggers like myself from Vermont. But war is — you know, it’s made heroic. It is not heroic. It is devastating. It is death. It is destroyed civilization. It is insane in this planet today, where we see, with the coronavirus, that everything affects everything. It is time to stop war. It is time to work together — together, excuse me — around the planet for the greater good of us all, is my view.

AMY GOODMAN: Jody Williams received the Nobel Peace Prize in 1997 for her work to ban landmines with the International Campaign to Ban Landmines. She’s co-founder of the Nobel Women’s Initiative.

Next up, the American Civil Liberties Union is warning a lot can go wrong with “vaccine passports.” We’ll find out how. Stay with us. 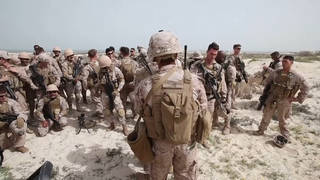