We speak with Bishop William Barber, co-chair of the Poor People’s Campaign, about his call for the creation of a diverse, interfaith humanitarian delegation to travel to Russia to bring home WNBA star Brittney Griner, who was sentenced last week to nine years in a penal colony for possessing just two ounces of cannabis oil. “Our priority should be this young lady coming home,” says Barber.

AMY GOODMAN: Well, Bishop, you raised sports, and I want to stick with that, although this goes way beyond sports. I want to ask you about calls to bring Brittney Griner home after a Russian court found the WNBA basketball star guilty of drug smuggling, sentencing her to nine years in a penal colony. During closing arguments last week, Griner took responsibility for bringing vape cartridges containing a small amount of cannabis oil with her through the Moscow airport, where she was arrested by customs authorities in February. She said the cannabis was prescribed for medical reasons.

BRITTNEY GRINER: I understand everything that’s being said against me, the charges that are against me, and that is why I pled guilty. But I had no intent to break any Russian laws. … I made an honest mistake, and I hope that in your ruling, that it doesn’t end my life here.

AMY GOODMAN: That’s Brittney Griner, her voice, speaking from behind bars in a cage in the Russian courtroom.

President Biden called her nine-year prison sentence “unacceptable,” promised to work to bring her home. The Russian Foreign Minister Sergey Lavrov has said the Kremlin is ready to discuss a prisoner swap.

Bishop Barber, you’ve called for the creation of a diverse, interfaith humanitarian delegation to travel to Russia to bring home Brittney Griner. Can you lay out how this would work? You’ve said you want to be a part of that delegation.

BISHOP WILLIAM BARBER II: Again, thank you so much. And if I might step back just two seconds and also say that on this other piece with the bill, you’re right, it’s not a game, which is why the Poor People’s Campaign, Repairers of the Breach and Kairos, we’re working to mobilize more than 5 million voters who are going to say our votes are not just support, but demands, for the kind of public policy that lifts all people.

You know, what we’re concentrating on with Brittney Griner’s situation is her full release. You know, we’re talking about oil. We’re talking about traces of oil and something that she used for medicinal purposes. And the only reason she’s being targeted is because she’s a high-profile basketball player that’s now caught up in geopolitics, and Russia is using her as some kind of pawn.

You know, I would hope — I have daughters — and if my daughter was in a situation, that people of clergy wouldn’t have to know us, but they would be willing to offer their moral strength. Some weeks ago, in front of the embassy, I was standing there with a Lutheran pastor, Unitarian, a few other people. There was a prayer vigil. And we said that in front of the embassy. There have been others that have called for it. I think as many of us as possible should do it.

We sent to the White House more than 800 clergy and religious leaders that signed off on a letter saying that if the embassy in Russia and the United States, the government — two governments would have to allow it; we can’t do it on our own. If they would allow it and come together, we would be willing to put together a diverse — it shouldn’t be any one or two people. This should be diverse. It should be Black, white, Brown, Native. It should be Jewish, Muslim, Christian, Sikh, whoever. It should be diverse. And they should have international reach, where we could call on clergy not only here, but even in Russia, even in other parts of the world, to say to Brittney that we want to bring this young lady home. That’s all we’re concerned about. Put down the swords. Put down this game. Stop using her as a pawn.

You know this is ridiculous, to put her in jail for nine years for something that was medicinal and it was oil, no intent. You know, sadly, she had to plead guilty, but there may be some reason for that. Now, we also say — and we don’t know all that’s going on behind the scenes. And we have said that we don’t know what negotiations are. We hope, certainly, that the prisoner swap moves and works.

And what I love about Brittney Griner is she [inaudible]. She lifted up [inaudible]. [inaudible] offering to go [inaudible] do it here, meeting at the embassy, Russian Embassy. We’ll do it there. But our priority should be this young lady coming home. This is her, her family —

JUAN GONZÁLEZ: Well, Reverend Barber — Reverend Barber, I would agree with you on the issue of trying to free Brittney Griner, but why do you need the embassy’s approval? Congressman Richardson, back in the '90s, went to Iraq to free Americans who were jailed there. He went as a — personally as a congressman without U.S. government approval. He went to Korea. Reverend Jackson, I remember going on a trip to him to Cuba to free prisoners. He just got on a plane and went. Is it possible for just a few clergy to go there directly without the embassy's approval?

BISHOP WILLIAM BARBER II: Yeah, I don’t think that’s actually accurate he just went. I talked to Reverend Jackson. I know he’s even offered and talked about this, and our lawyers have told us that there has to be some dialogue in there. You can’t just go up into Russia, go into other places. There has to be some allowance even to move into the country. Listen, whatever works.

And I will [inaudible] say that Reverend Jackson is a tremendous friend of mine, who — you know, his mind is still strong and powerful. And I’m sure that he’s involved. And if he’s not, the White House should be talking to him, because, again, he’s done this. He knows what they’re doing. And if he can even go physically, he certainly can be a tremendous ally. He has been with us. And the main thing here, my brother, is that clergy and religious leaders in moments like this should always step up and offer and be willing. And that’s what we’re saying in this moment.

AMY GOODMAN: Bishop Dr. William Barber, we want to thank you for being with us, co-chair of the Poor People’s Campaign, president of Repairers of the Breach.

Next up, we speak with The New York Times reporter Elizabeth Williamson, author of Sandy Hook: An American Tragedy and the Battle for Truth, about the trial of the far-right conspiracy theorist Alex Jones, ordered to pay $49 million to the parents of a Sandy Hook massacre victim. Back in 30 seconds. 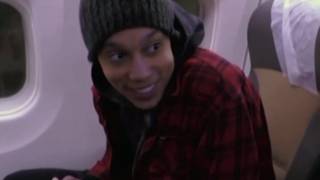