Senator Dole and Senate Jesse Helms together have been holding up millions of dollars in aid that the U.S. promised to the government of Haiti to boost their economy and assist in a peaceful transition to democracy. Without this money, Haiti could see an exodus of economic refugees. The two Senators are insisting that the government of Haitian President Rene Preval investigate the killings of opponents of Jean Bertrand Aristide after he was re-instated by U.S. troops. The Clinton Administration considers Haiti one of its foreign policy successes and some critics believe election year politics are affecting Congressional action on Haiti. 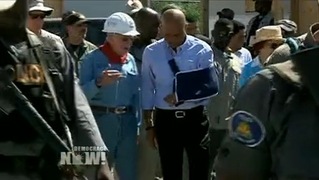 2 Years After Devastating Earthquake, Haiti’s Rebuilding Weighed Down by Legacy of Foreign Meddling