This place where we have been broadcasting from this past week in Philadelphia is the Independent Media Center. The first of its kind, we saw in Seattle last year. Since then, this safe space for independent media makers has traveled to Washington, and now it is here in Philadelphia. Activists have been working for months to get this remarkable project together. You may hear that our voices are echoey. We are in a vast space, a little like a ballroom that is filled with computers and video and sound equipment. But more than that, there is an incredible amount of human resources here. Hundreds of media activists have come from around the country to portray what is happening on the streets with their cameras, microphones and laptop computers. From here, they can convey and send out to the nation and the world the phenomenon that is up rising against corporate power. But not through a corporate lens. [includes rush transcript]

[We] move on now to the place that we are broadcasting from: the Independent Media Center. We’re joined by some of the founders of, organizers of this center, who have worked for many months in pulling this remarkable project together. You may hear our voices are echoey. We’re in a really vast space, a kind of ballroom that is filled with computers. But most importantly are the human resources who are here. Hundreds of video activists have come from around the country to portray, as Sara has done, what is happening on the streets with their video cameras and their microphones, so that they can convey, capture, send out to the nation and the world this global uprising against corporate power not through a corporate lens.

Our guests are Inja Coates, who is co-founder of the Philadelphia IMC, along with Alec Meltzer and Jay Sand. And we welcome you to Democracy Now! in your own home, as we are guests here at the Independent Media Center in Center City.

It’s good to have you with us. Tell us each where you’ve come from to put together this place. Inja Coates, what were you doing first.

Well, I have been working in the local community here in many different capacities, and I guess the thing that really led me to this work was the work I was doing to try to get public access television established in Philadelphia. This is a campaign, or a continuation of a campaign, that’s been going on for more than fifteen years. Most recently, we’ve been working on this for about three years. And through this work, I came to it really just as a concerned citizen and a volunteer. And I just, more and more, really saw how important it is to try to democratize our information sources and empower people in their various communities to inform themselves in a way that doesn’t exploit them.

ALEC MELTZER: Sure. I think we’ve had the benefit of — I think we’ve had the benefit of the actions in Seattle and in Washington, D.C. and in cities all over the world, really, that have had these independent media centers pop up around specific events. And it’s really galvanized the movement, I think, worldwide, and brought together lots of people to create this independent media movement. And I think what we’re seeing here in Philadelphia is really the benefit of less than a year’s work building on this new Indymedia type of movement, and it’s brought more and more people together at every single event.

Are some of these centers going to become permanent institutions within the cities that they’re located, or will they basically sprout up and then disassemble as activities occur in different cities?

ALEC MELTZER: I think that’s one of the real great things about the independent media movement, the modern one now, is that there’s a lot of autonomy, I think, among each city, depending on the type of event they’re pulling off and what they plan to do later on. Here in Philadelphia, there’s real plans to actually have a more long-lasting organization put into place once the Republican Convention is through. And I think we’ve really developed something here. We have lots of people from Philadelphia who are part of this media center, and over a hundred activists were here on the ground before the convention even started. And we’re hoping to keep that collective together and continue forward.

Jay Sand, how many hits on the www.indymedia.org website?

JAY SAND: There are at least a million hits, and —

JAY SAND: There are a couple of different ones. The Philly-specific site is www.phillyimc.org, and then there’s a main Indymedia site, which is www.indymedia.org. That’s I-N-D-Y-M-E-D-I-A. And there were a million hits on the Philly site. And one of the most impressive statistics about that is that these aren’t just people passing by. These are — the unique user’s number indicates that there are people actually paying attention. There are people who have given up on finding out information about what’s happening here by turning on their local news, and they’re specifically coming back to the Philadelphia site, because they know that we’re able to tell them what’s happening on the streets and also tell them what’s happening and why. The local news that they’ve listened to doesn’t even bother to tell them why things are going on. And the Indymedia site and the Philly IMC site both provide incredible amounts of context, the type of things that media are supposed to do to help people understand what’s happening.

How did Washington, the protests against the IMF and the World Bank, the founder — you’re one of the founders of that IMC — fuel this one in Philadelphia?

JAY SAND: Well, it’s really a growing group of autonomous independent media centers, and the idea is that people have been making independent media for all time. People have tried to express themselves in ways that perhaps they weren’t encouraged to or allowed to by the dominant society. And these people coming — they’re not coming out of the woodwork to be involved. These people have been working, as you have, for decades to provide an independent voice and true information about what’s happening.

Inja, I have a question, and we just have a minute. Are you concerned that you’re doing the police’s work for them in this one way. We’ve seen a lot of undercover cops with cameras. They’re doing a lot of videoing themselves. You gather video. We’ve been broadcasting a lot of it on Democracy Now! on public access TV around the country. The evening program Smash — the evening program Crashing the Party has also been doing that. It identifies a lot of people. Is this a concern to you?

Yes, I’d have to say it is a concern. However, I feel that most — that there’s — it’s important for the public to be able to see this stuff that’s happening. I think that, in addition to possibly being incriminating to activists, it’s also very important to show the behavior of the police. And I really hope that that advantage outweighs any negative outcome that results from it.

And you expect a strong Los Angeles Independent Media Center?

Well, I know that they’ve been having some trouble organizing. Apparently, the Republicans are much easier to organize against than the Democrats, but I’m certainly optimistic and hope for the best and wish them well.

We want to thank you all for being with us. Alec, thank you for being here. Alec Meltzer and Inja Coates, co-founders of the Philadelphia IMC, worked with Jay Sand, as well, founder of the IMC in Washington, D.C. And if people want to see that work of yours and hundreds of independent activists you can go to phillyimc.org. 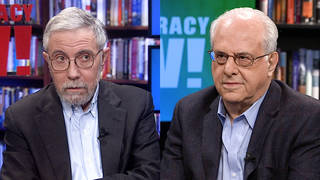