The Bush administration’s handling of the case of Maher Arar came under new scrutiny Thursday when Attorney General Alberto Gonzales appeared before the Senate Judiciary Committee, now controlled by the Democrats. Arar is the Canadian citizen who was seized by U.S. officials during a stopover flight in New York in 2002. He was secretly sent to Syria as part of the Bush administration’s extraordinary rendition program. [includes rush transcript]

JUAN GONZALEZ: The Bush administration’s handling of the case of Maher Arar came under new scrutiny Thursday when Attorney General Alberto Gonzales appeared before the Senate Judiciary Committee, now controlled by the Democrats. Arar is the Canadian citizen who was seized by U.S. officials during a stopover flight in New York in 2002. He was secretly sent to Syria as part of the Bush administration’s extraordinary rendition program. In Syria, Arar was held for almost a year in a grave-like cell. He was repeatedly tortured. He was released without ever being charged with a crime.

AMY GOODMAN: Last year, the Canadian government determined Maher Arar was innocent, but the Bush administration has never apologized for its actions. On Thursday, Attorney General Alberto Gonzales refused to state why U.S. detained him and why he was sent to Syria instead of home to Canada. The attorney general was questioned by Vermont Senator Patrick Leahy, now the new chair of the Senate Judiciary Committee.

SEN. PATRICK LEAHY: Attorney General, I’m sorry. I don’t mean to treat this lightly. We knew damn well if he went to Canada, he wouldn’t be tortured. He’d be held; he’d be investigated. We also knew damn well if he went to Syria, he would be tortured. And it’s beneath the dignity of this country, a country that has always been a beacon of human rights, to send somebody to another country to be tortured. You know and I know that has happened a number of times in the past five years by this country.

It is a black mark on us. It has brought about the condemnation of some of our closest and best allies. They have made those comments both publicly and privately to the president of the United States and others. And it is easy for us to sit here comfortably in this room, knowing that we’re not going to be sent off to another country to be tortured, to treat it as though — well, Attorney General Ashcroft said, “We’ve got assurances,” though assurances from a country that we also say now, “Oh, we can’t talk to them because we can’t take their word for anything.”

ALBERTO GONZALES: Yes, sir. I can tell. But before you get more upset, perhaps you should wait to receive the briefing —

ALBERTO GONZALES: I’m hoping that we can get you the information next week.

AMY GOODMAN: Senator Patrick Leahy, questioning Attorney General Alberto Gonzales. Maher Arar is still awaiting an apology from the Bush administration. Three months ago, Arar was honored in Washington, D.C., by the Institute for Policy Studies, but he was unable to attend the ceremony, because he remains on the U.S. no-fly list, even though the Canadian government has publicly acknowledged he is innocent. This is part of a video message Maher Arar recorded for the award ceremony.

MAHER ARAR: We now know that my story is not a unique one. Over the past two years, we have heard from many other people who have been kidnapped, unlawfully detained, tortured and eventually released without being charged with any crime in any country.

My nightmare began on September 26, 2002. I was transiting through New York airport, JFK Airport, when they asked me to wait in a waiting area. I found that to be strange. Shortly after, some FBI officials came to see me, and they asked me whether I was willing to be interviewed. My first and immediate reaction was to ask for a lawyer, and I was surprised when they told me that I had no right to a lawyer because I was not an American citizen. Eventually, on October 8th, against my will, they took me out of my cell. They basically read a piece of document to me saying that “we will be sending you to Syria.” And when I complained, I said to them, “I did explain to you that if I’m sent back, I will be tortured.”

AMY GOODMAN: Maher Arar sent that video message when he was being honored by the Institute for Policy Studies in Washington, D.C.

Medical Apartheid: The Dark History of Medical Experimentation on Black Americans from Colonial Times to the Present

NEXTMedical Apartheid: The Dark History of Medical Experimentation on Black Americans from Colonial Times to the Present 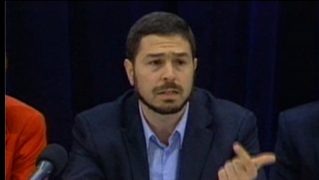