Last week marked the second anniversary of the detention of the internationally recognized award-winning human rights activist Dr. Binayak Sen, who’s worked as a public health professional in the central Indian state of Chhattisgarh for twenty-five years. He was arrested on May 14, 2007, for allegedly helping the Maoist, also known as the Naxalite, insurgency in the state and detained under one of India’s most draconian laws, the Chhattisgarh Special Public Security Act. [includes rush transcript]

Well, moving on to Binayak Sen, last week marked the second anniversary of the detention of the internationally recognized, award-winning human rights activist Dr. Binayak Sen, who has worked as a public health professional in the central Indian state of Chhattisgarh for twenty-five years. He was arrested on May 14th, 2007, for allegedly helping the Maoist, also known as the Naxalite, insurgency in the state and detained under one of India’s most draconian laws, the Chhattisgarh Special Public Security Act. He’s the National Vice President of the People’s Union for Civil Liberties, or the PUCL. He’s been denied bail and medical treatment, despite his worsening health.

I spoke to his wife, Ilina Sen, on Sunday.

ILINA SEN: I think he was the loudest voice of dissent against the excesses that the government was committing in the name of so-called anti-Naxal operations. And it was extremely — it’s a very complex situation in which the anti-Naxal operations are also taking place in the districts which are mineral-rich and where a lot of finance capitalists refuse to come in and [inaudible] have been fined and people’s land is to be acquired. And people are resisting land acquisition, you know, under these conditions. Many villages have refused to give consent. I mean, in tribal areas, scheduled areas, a [inaudible] is supposed to give consent. Many villages have refused to do that, and they have been coerced in so many ways.

The Salwa Judum, which is a flagship program of the Chhattisgharh government’s anti-Naxal operations, the government proclaims it as a peaceful people’s movement, but actually it is fully supported, funded, sponsored by the government, people around by the government to, well, to commit all kinds of executions of people who are supposed to be Naxalite sympathizers. So, Binayak’s was the loudest voice of dissent against that. So that is why he, in particular.

The laws under which he was charged, initially we had no idea. It was a third person who was arrested who was supposed to have had some letters, which Binayak, during some of his jail visits, was supposed to have couriered out of the jail. So it was a very complex kind of a scenario under which to have been charged. And ultimately, they charged him with sedition, waging war against the state of India, and criminal conspiracy, etc., etc., etc. So these are very, very serious charges. These are the charges that were applied on Bhagat Singh, who was hanged for waging war against India [inaudible].

Can you describe the work that Dr. Binayak Sen and you have been doing in Chhattisgarh?

ILINA SEN: We have been in Chhattisgarh for over a quarter of a century, and we worked with people’s organizations, with trade unions and with Adivasi tribal groups. And one of the key tenets of whatever we have done is that we have tried to give control to the people over their own lives and the kind of development that they would like to have and whatever programs, service programs, health, education. We’ve tried to build it around the priorities of local communities. We try to validate and document sustainable agriculture, [inaudible] that people have, and tried to build up [inaudible] programs around that.

Binayak’s particular area of interest was one of food security and nutrition, because nutrition was a subject that was very close to him, right from his time when he was studying, his dissertation, when he was in nutrition, malnutrition, nutrition. So, food security was one area. And the other was training health workers in primary healthcare and in battling killer diseases, which are very prominent here and very sort of — not very complicated disease patterns. But malaria is a killer, malignant falciparum malaria. So how to develop systems in which diagnoses have been fairly — people with very little formal education can diagnose, can treat and streamline in these systems. That was his major area of work.

And what are you calling for now, what is the Binayak Sen campaign calling for? What are the main demands?

ILINA SEN: The Binayak Sen campaign, in particular, I think is calling for his release and for his — currently also trying to expedite, facilitate his medical treatment, because that is a serious issue. But at the same time, the Binayak Sen campaign is also drawing attention to all that is happening in Chhattisgarh, to the issue of human rights defenders, to the issue of Adivasi rights, people’s, you know, right to have the kind of development that they want. So it is raising a large number of wider issues, to which Binayak’s arrest is connected. But at the same time, I think the central demand is for Binayak’s release.

The voice of Ilina Sen, the wife of Dr. Binayak Sen, who has been arrested in India, in detention for two years now. I also want to thank Balmurli Natarajan, assistant professor of anthropology at William Paterson University in New Jersey. 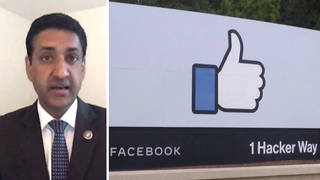