In 1968, Olympic medal winner John Carlos became an international icon when he and Tommie Smith raised their fists in the Black Power salute during the national anthem at the Olympic prize ceremony as a protest against racism in the United States. The photo of the men has become one of the most iconic images of our time. Carlos has just published a new memoir with assistance from sportswriter Dave Zirin. The two spoke to a crowd at Occupy Wall Street on Monday. “To come down here [is like] déjà vu, to think that there’s so many people that has a concern about society, not just oneself, but all individuals on this planet,” Carlos said. “They’re concerned about the fact that many people are losing their jobs. Many people are being moved out of their homes. Many individual students that got loans to go to school to get that education to be one of the workers in this great country we have, and then to know that now they’re hounded for their student loans and can’t pay them. Everyone is in a quandary.” [includes rush transcript]

DAVE ZIRIN: It was a revolutionary year. You had students in France, you had workers in Mexico City, you had the Black Panther Party, you had women, you had LGBT people, fighting for their rights. You also had the assassination of Dr. King. And if there was one moment, and if there was one moment, that symbolized that year, it was when John Carlos and Tommie Smith raised their fists at the 1968 Olympics. People know the fist, but they also didn’t wear shoes on the medal stand to protest poverty. They wore beads to protest lynching. And John Carlos had his fist up high in case he had to punch somebody trying to take him down. John Carlos paid a terrible price for his actions that day. But he’s here to tell you that he doesn’t regret one damn thing.

JOHN CARLOS: My name is John Carlos. Track and field used to be my game. As you can see, I have on my shirt, I have the United States flag, I have the flag of the Olympic movement, and also I have down here Mexico City. And if you was to look at Mexico City and think about the Olympics and the United States flag, I could not do any more than think about all the young students that lost their lives because they had a forum such as we have here today for justice and equality for all people.

AMY GOODMAN: And talk about what happened to you in Mexico City.

JOHN CARLOS: Well, in Mexico City, I felt it was imperative that I make the victory stand, because I had a message that I wanted to deliver to the world, relative to how people whose consciences have gone to sleep, and we wanted to do something that would be shocking and revealing enough to wake up everyone up, from their conscience, and realize that we’re all in this bowl of soup together. And, you know, all these people here, talking about bowl of soup, all the people that you see here and the people you see walking by, I see all those people in this forum here, they’re eating the soup. Those individuals that walk by, they would like to eat the soup, but they just don’t have the courage yet. But as long as we stay on, they will grow, and they’ll begin to get strong enough to eat the soup, to make change for the better for the society.

AMY GOODMAN: So, John Carlos, you’re here at Occupy Wall Street. How does it feel?

JOHN CARLOS: Well, it’s right up the street from my old neighborhood, which is Harlem. You know, for me to come down here and come down here and really go through like that déjà vu, to think that there’s so many people that has a concern about society, not just oneself, but all individuals on this planet. They’re concerned about the fact that many people are losing their jobs. Many people are being moved out of their homes. Many individual students that got loans to go to school to get that education to be one of the workers in this great country we have, and then to know that now they’re hounded for their student loans and can’t pay them. Everyone is in a quandary. And I’m just so happy to see so many people who are standing up to say, “We’re not asking for change. We demand change.”

AMY GOODMAN: Olympic athlete John Carlos and sportswriter Dave Zirin addressed the General Assembly here at Occupy Wall Street encampment in Liberty Plaza, then did a little teach-in, as you just heard. John Carlos, 1968, Mexico City, won the bronze in the 200-meter race. He and Tommie Smith, when they stood up to get their medals, put up their hands in the Black Power salute, that led to so much, so much devastation and so much pride around the world, devastation of his career, though it’s something I think he believes he would always do again, as he stood with the black leather glove, not wearing his shoes, to stand against poverty and for human rights. We’re going to have both John Carlos and Dave Zirin on our show on Wednesday, so do tune in and tell your friends. That does it for us today from Wall Street, from Liberty Plaza, where thousands of people are continuing to come here. Hundreds are camping out overnight, inspiring protests in over a thousand cities around the world. If you want to hear and watch and read more, go to our website at democracynow.org. 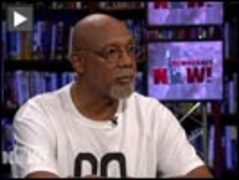