African heads of state are convening today in Equatorial Guinea for a week-long African Union summit. There has been a wave of arrests leading up to the summit, with police detaining an estimated 100 people. Human Rights Watch reports Equatorial Guinea is rife with politically motivated harassment, arbitrary detentions and unlawful killings. The country’s government also faces criticism for spending an estimated $830 million to build a city for the summit, with luxury villas for visiting diplomats, an artificial beach and a golf course. Equatorial Guinea’s dictator, Teodoro Obiang, has led the country since 1979. Despite his human rights record, Obiang has maintained relations with the United States and many U.S. firms, including Exxon Mobil. We speak with Tutu Alicante, executive director of EG Justice, a U.S.-based organization dedicated to promoting the rule of law, transparency and civil society participation in Equatorial Guinea. [includes rush transcript]

JUAN GONZALEZ: African heads of state are convening today in Equatorial Guinea for a week-long African Union summit. There’s been a wave of arrests leading up to the summit, with police detaining an estimated 100 people. According to Amnesty International, the police crackdown is intended to prevent pro-democracy protests during the summit. The country banned protests after uprisings against long-term rulers started in the Middle East and North Africa.

Equatorial Guinea is a tiny country located on the west coast of Africa that has grown in importance since its vast oil reserves were discovered in 1995. It currently is chair of the African Union, but many human rights groups are opposed to its involvement in the summit. Human Rights Watch reports that Equatorial Guinea is rife with politically motivated harassment, arbitrary detentions and unlawful killings. This is Arvind Ganesan of Human Rights Watch.

JUAN GONZALEZ: Human rights groups have also criticized Equatorial Guinea’s government for spending an estimated $830 million on diplomatic accommodations for the African Union summit, while neglecting the rights of the country’s impoverished majority. The summit is being held in a city built just for the occasion, with luxury villas, an artificial beach and a golf course. Equatorial Guinea’s dictator, Teodoro Obiang, has led the country since 1979. Despite his human rights record, he has maintained relations with the United States and many U.S. firms, including Exxon Mobil and Hess. In September 2009, Obiang posed for a photo with President Obama and First Lady Michelle Obama in New York.

AMY GOODMAN: For more on Equatorial Guinea and the African Union summit, we’re joined by Tutu Alicante in Tampa, Florida. He’s the executive director of EG Justice, a U.S.-based organization dedicated to promoting the rule of law, transparency and civil society participation in Equatorial Guinea.

Welcome to Democracy Now! Can you talk about the situation right now in your country, in Equatorial Guinea?

TUTU ALICANTE: Certainly. First of all, thank you very much, Amy, for this invitation. It is an honor.

JUAN GONZALEZ: And this comes at a time when 75 percent of the people in your country don’t even have running water?

AMY GOODMAN: As you said, Tutu, government officials in Equatorial Guinea insist the human rights situation in their country is improving. They warn against what they call “foreign meddling.” This is what Carmelo Mekong of the National Commission of Human Rights in Equatorial Guinea told the Christian Science Monitor.

CARMELO MEKONG: [translated] We are obligated to respect these. What we don’t want to accept is a decree from certain countries saying Equatorial Guinea is violating human rights and this and that and so on. There is no unique formula.

But what I would say, just last week, on June 11th, there was a German TV crew. This is—I think they’re called the ZDF. They were in Equatorial Guinea filming the women’s soccer team, which should be participating right now in the Berlin competitions for women’s soccer. And this group, after interviewing the team members of the women’s team in Equatorial Guinea, also interviewed kids playing in the slums and interviewed political opposition and interviewed members of civil society. And the government learned of, heard that and confiscated all the footage that they had gotten outside the interviews with the women’s soccer team. Now, if this a government that has nothing to hide, if this is a government that thinks we are meddling, those of us on the outside are meddling, why would they be confiscating footage from a crew that was just recording what they’ve seen in Equatorial Guinea?

TUTU ALICANTE: So, clearly, this is not a case of foreigners meddling into what’s happening in EG. This is a case of a government that, rather than investing in its people, is just investing in this big, fancy elephant—you know, big buildings and stadiums and things just to show the international community that they’re building something, when in fact life for the average Equatorial Guinean has not improved since the oil discovery.

JUAN GONZALEZ: Let me ask you about that. How is it that there is such desperate poverty in the country when the country is now rich with oil? And what’s the relationship between Equatorial Guinea and the United States and American oil companies?

TUTU ALICANTE: Well, that discrepancy that you mentioned is exactly what baffles most of us, right? The fact that this is a country that has the highest GDP per capita, income per capita in Africa—I mean, its income per capita is on par with Japan and Germany and the U.K., you know? Yet, most people in EG do not have running water. Where’s all that money going? We know that the government of Equatorial Guinea—well, the President, his family and his son—are all under investigation. They have been under Senate investigation in the U.S. There is an investigation going on by the French judicial authorities right now. There are a couple of investigations going on in Spain, for money laundering, for basically using the monies of the state to buy villas around the world. The son of the President, for instance, owns a $35 million estate in Malibu. We just heard yesterday that the government just purchased another high-end apartment in New York. So, basically, this is a government that, rather than spending money inside the country, government officials, primarily the President and family members, are using all that money to buy properties outside EG.

Now, I should say that today we can say that the United States has improved from the days in which Condoleezza Rice would have said that Equatorial Guinea was “a good friend of the United States,” right? We have improved, and we’re not there anymore. However, the U.S. hasn’t, at least to our liking, hasn’t shown what is the progressive foreign policy that it has towards Equatorial Guinea. At a time where President Obama and Secretary Clinton have made wonderful speeches in Accra and other places in Africa about the importance of promoting democracy, about the importance of promoting transparency, about the importance of using the natural resources of Africa—

AMY GOODMAN: And finally, five seconds, the oil companies that are involved? We’re talking Chevron and which others? As well as MPRI, the Military Professional Resources Initiative based in Virginia, getting a $250 million contract last year?

TUTU ALICANTE: Yes. I think Chevron is no longer in Equatorial Guinea. But yes, we are talking about Exxon Mobil and Amerada Hess and Marathon and some smaller companies, as well as MPRI, you know, which are heavily invested in Equatorial Guinea, yes.

AMY GOODMAN: We have to leave it there. Tutu Alicante, thank you so much for being with us. And thank you to WEDU, PBS station in Tampa.

Global Health Doctor: Hire 1000s of Contact Tracers to Stop COVID-19, Save Lives and the Economy 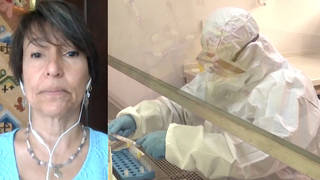 Global Health Doctor: Hire 1000s of Contact Tracers to Stop COVID-19, Save Lives and the Economy