Jody Williams, winner of the 1997 Nobel Peace Prize for her work with the International Campaign to Ban Landmines, calls for an end to Israel’s assault on the Gaza Strip. Williams chairs the Nobel Women’s Initiative and is author of the forthcoming book, “My Name is Jody Williams: A Vermont Girl’s Winding Path to the Nobel Peace Prize.” In 2011, she joined three other women Nobel Peace laureates in calling for the safe passage of an international flotilla to Gaza. [includes rush transcript]

AMY GOODMAN: Jody, I wanted to end on a slightly different issue, speaking to you as a Nobel Peace Prize laureate. We’ve spent the rest of the show looking at Gaza. Last year, four Nobel Peace laureates, Mairead Maguire, Shirin Ebadi, Rigoberta Menchú, and you, Jody Williams, wrote a letter to the U.N. secretary-general to, quote, “use [his] offices in support of the humanitarian needs of the people of Gaza … by appointing a representative to inspect and seal the cargo of the boats of the Freedom Flotilla [II]—thus assuring the Israeli government that the boats are carrying humanitarian supplies such as toys, medical supplies, cement and educational materials,” supporting the embargo—the flotilla that—boats that have come in to try to challenge the embargo.

Now what’s happening in Gaza is at a new level. There are more than 116 Palestinians who have been killed in the last week under the Israeli bombardment. Three Israelis have died from missiles that have come from Gaza. What are your thoughts today on what should take place?

JODY WILLIAMS: I think that Gaza needs to be open to humanitarian aid and all sorts of products. I think that it’s very hard to think about Israel calling what it’s doing defending itself, when it’s, you know, occupying Palestinian territory. It’s collective punishment. We cannot support punishing an entire population because of the policies and attacks of Hamas. It’s illegal. There just has to be a way to stop this madness and find peace. I think it is possible. I can’t understand why so many people are willing to continue holding Palestinian people themselves hostage, when they should be free, just like most of us.

AMY GOODMAN: Well, Jody, I want to thank you for being with us, winner of the 1997 Nobel Peace Prize, who won for her work with the International Campaign to Ban Landmines, chair of the Nobel Women’s Initiative. And thank you to Steve Goose, who’s joined us from Human Rights Watch.

“Where Should the Birds Fly”: Gaza Filmmaker Documents Civilian Toll of 2008-09 Israeli Assault 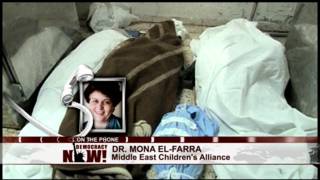