A wave of historic protests struck the retail giant Wal-Mart on Black Friday, the busiest shopping day of the year. Workers and their supporters demonstrated at more than 1,000 stores. The Wal-Mart protests were organized in part by OUR Walmart, an organization backed by the United Food & Commercial Workers International Union. Nine people, including three Wal-Mart workers, were arrested at a protest in Los Angeles after they blocked traffic. We broadcast the voices of protesters in Secaucus, New Jersey, and speak to Josh Eidelson, a contributing writer for The Nation magazine. [includes rush transcript]

AMY GOODMAN: We turn now to the wave of historic protests that struck the retail giant Wal-Mart on Black Friday, the day after Thanksgiving. That’s the busiest shopping day of the year. Workers and their supporters demonstrated at more than a thousand Wal-Mart stores. Democracy Now! went to the Wal-Mart store in Secaucus, New Jersey, on Friday.

SUNDROP CARTER: My name is Sundrop Carter, and right now we’re in front of—actually, we’re in front of Sam’s Club next to Wal-Mart in Secaucus, New Jersey, at a Black Friday protest. Workers across the country are walking out of stores today, telling Wal-Mart that they’re tired of being treated badly and want fair wages and respect at their workplace. And we’re here in solidarity with those workers. Last I heard, there’s over a thousand actions happening across the country, and there’s walkouts happening, worker walkouts happening in over a hundred stores.

WALTER AREVALO: My name is Walter Arevalo. I used to work at the store over at Kearny, New Jersey. That was store number 5447. I worked there for like about two-and-a-half years. It was a pretty hostile environment. Particularly, they would expect you to do like—for one person to do like a three-man job and like, you know, in basically eight hours. There were times like—I don’t know how I would do so, but there were other workers that—you know, that they just really couldn’t handle like the amount of work that was given to them.

TAMI TYREE: My name is Tami Tyree. I’m with the Retail Action Project, and we fight for change in the retail industry. Many people shop, but they don’t think about who’s the person that’s helping them and that that person has a family and is making a living. This is not just something that people do on their way to something else all the time, which is what the major employers try to tell people. These are careers. I made a living doing retail work for 30 years. And many people are not able to do so today.

There’s a large percentage of retail workers that are working for $7.25 an hour, which is minimum wage, and even some retailers are paying people below minimum wage. Benefits come to you when you work a certain amount of hours and when you have a certain status. But if people are working, and they’re not getting even part-time hours, not even part-time hours, how can you get benefits? So the way that they are denied benefits is by not giving the workers the hours and giving them the classification of full-time or even authorized part-time work.

WALTER AREVALO: We talked about going on strike and everything, but that just never—it just never went through. We even talked about walking out on Black Friday, even before all this happened. Management bullies them, and like, they’ll just let them know, well, look, if you do so and so, you’ll just lose your—you know, you’re going to lose your job, point blank.

STEVE SHERMAN: People were doing mic checks, like in groups about 10, and Wal-Mart security was coming around and telling people they would have to leave. And so people sort of dispersed, and then we just found this other group of about 50 or 60 people who were being pushed out of the store by security and chanting on the way out.

MAX BRUNY: My name is Max, and I’m from United Food and Commercial Workers Local 888. The nation is finally catching up with what’s going on at Wal-Mart. It is one thing to say, “Low price, low price, low price,” but there is a price to the low price.

WALTER AREVALO: It’s time for like Wal-Mart associates and even associates now, you know, to show a message over to the folks over in Bentonville, Arkansas, that, you know, we’re just not going to take it anymore.

AMY GOODMAN: The voices of protest outside a Secaucus, New Jersey, Wal-Mart, produced by Democracy Now!'s Sam Alcoff and Martyna Starosta. They produced the piece. The Wal-Mart protests were organized, in part, by OUR Walmart, an organization backed by the United Food and Commercial Workers. Nine people, including three Wal-Mart workers, were arrested at a protest in Los Angeles after they blocked traffic. Wal-Mart responded by diminishing the impact of the demonstrations. This is the company's marketing officer, Duncan MacNaughton.

DUNCAN MacNAUGHTON: We estimate that less than 50 Wal-Mart associates were involved in the protests across the United States. And in many of those locations, no Wal-Mart associates took place. We had roughly the same number of call-ins than we had last year for people that didn’t come to work.

AMY GOODMAN: Well, for more, we’re joined by Josh Eidelson, contributing writer for The Nation magazine_, Salon and In These Times, where he’s been reporting on the Wal-Mart protests. We did ask Wal-Mart to join us today, but they did not respond to our request.

We had you on last Wednesday, before the big protests on Friday. Can you summarize what happened, Josh, on Black Friday?

JOSH EIDELSON: Sure. So what we saw Thursday night and Friday was over a thousand protests, strikes in a hundred cities, according to organizers. Those strikes, they say, included hundreds of workers. Organizers say they’re still counting the number. But for perspective, in October we saw 160 retailer workers go out on strike. So, if there were hundreds out, we’ve seen not exponential growth, but likely steady increase in the number of workers who are out. And that comes after significant threats and captive audience meetings and other efforts by Wal-Mart to suppress the protests and make workers believe that there would be, quote-unquote, “consequences.”

AMY GOODMAN: What do you mean by “captive audience meetings”? And also, talk about Wal-Mart’s changing or evolving response to these growing protests.

JOSH EIDELSON: So, I talked to workers for The Nation who described mandatory meetings, where Wal-Mart, a company that we know doesn’t pay for anything they don’t think they have to, paid workers to sit in meetings where they were told that if they participated, it could hurt Wal-Mart sales, it could cut into their bonuses, where they were told “no comment” in response to the question of whether they could be disciplined for participating. And so, we see, at the same time that Wal-Mart publicly has been dismissive, privately Wal-Mart has made an intensified effort over the past week leading up to Black Friday to make workers believe that they could suffer adverse consequences if they participate.

AMY GOODMAN: And then, talking about whether these protests were legal or illegal?

JOSH EIDELSON: Yes. So, Wal-Mart filed a National Labor Relations Board charge, which, as I explained at The Nation, is unlikely to succeed, but sends the message to workers that Wal-Mart is claiming the strikes are not legally protected. Whether Wal-Mart wins would turn on whether the strikes are designed to win union recognition, and the workers haven’t really provided Wal-Mart any evidence of that. But this was a shot across the bow to send the message that even though the law protects strikes against unfair labor practices, Wal-Mart sees the strikes as illegal, which would give Wal-Mart justification to fire people who participated. 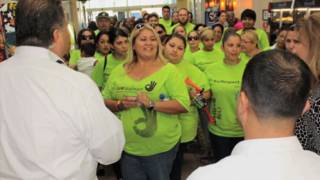 Wal-Mart Accused of Threatening Workers with Retaliation Ahead of Black Friday Walkouts, Protests