President Obama has been re-elected to a second term with a resounding victory over Republican challenger Mitt Romney. By the end of the night, Obama won 50 percent of the popular vote, securing 303 electoral votes to Romney’s 206. Obama swept nearly all of the key battleground states, taking Ohio, Virginia, Pennsylvania, Nevada, Iowa, Wisconsin, Colorado, New Hampshire, and a likely victory in Florida. While the major networks began calling the election for Obama at 11:20 p.m. EST, Romney did not publicly concede until nearly two hours later. After avoiding the issue of climate change throughout the campaign, Obama returned to it in his Chicago victory speech, telling supporters: “We want our children to live in an America that isn’t burdened by debt, that isn’t weakened up by inequality, that isn’t threatened by the destructive power of a warming planet.” [includes rush transcript]

AMY GOODMAN: President Obama has been re-elected to a second term with a resounding victory over Republican challenger Mitt Romney. By the end of Tuesday night, Obama won 50 percent of the popular vote, securing 303 electoral votes to Romney’s 206. Obama nearly swept all of the key battleground states, taking Ohio, Virginia, Florida, Pennsylvania, Nevada, Iowa, Wisconsin, Colorado and New Hampshire. There were only two states President Obama won in 2008 but lost in 2012: North Carolina and Indiana.

While the major networks began calling the election for Obama at 11:20 p.m. Eastern time, Romney did not publicly concede until nearly 1:00 a.m. President Obama spoke close to 2:00 a.m. Eastern time. He addressed thousands of cheering supporters at McCormick Place in Chicago.

PRESIDENT BARACK OBAMA: I know that political campaigns can sometimes seem small, even silly. And that provides plenty of fodder for the cynics who tell us that politics, nothing more than a contest of egos or the domain of special interests. But if you ever get the chance to talk to folks who turned out at our rallies and crowded along a rope line in a high school gym or—or saw folks working late at a campaign office in some tiny county far away from home, you’ll discover something else.

That’s why we do this. That’s what politics can be. That’s why elections matter. It’s not small, it’s big. It’s important. Democracy in a nation of 300 million can be noisy and messy and complicated. We have our own opinions. Each of us has deeply held beliefs. And when we go through tough times, when we make big decisions as a country, it necessarily stirs passions, stirs up controversy. That won’t change after tonight. And it shouldn’t. These arguments we have are a mark of our liberty, and we can never forget that, as we speak, people in distant nations are risking their lives right now just for a chance to argue about the issues that matter, the chance to cast their ballots like we did today.

But despite all our differences, most of us share certain hopes for America’s future. We want our kids to grow up in a country where they have access to the best schools and the best teachers, a country that lives up to its legacy as the global leader in technology and discovery and innovation, with all of the good jobs and new businesses that follow. We want our children to live in an America that isn’t burdened by debt, that isn’t weakened by inequality, that isn’t threatened by the destructive power of a warming planet.

We want to pass on a country that’s safe and respected and admired around the world, a nation that is defended by the strongest military on earth and the best troops this—this world has ever known, but also a country that moves with confidence beyond this time of war to shape a peace that is built on the promise of freedom and dignity for every human being.

We believe in a generous America, in a compassionate America, in a tolerant America open to the dreams of an immigrant’s daughter who studies in our schools and pledges to our flag; to the young boy on the South Side of Chicago who sees a life beyond the nearest street corner; to the furniture worker’s child in North Carolina who wants to become a doctor or a scientist, an engineer or an entrepreneur, a diplomat or even a president.

MITT ROMNEY: The nation, as you know, is at a critical point. At a time like this, we can’t risk partisan bickering and political posturing. Our leaders have to reach across the aisle to do the people’s work. And we citizens also have to rise to the occasion.

We look to our teachers and professors; we count on you not just to teach, but to inspire our children with a passion for learning and discovery. We look to our pastors and priests and rabbis and counselors of all kinds to testify of the enduring principles upon which our society is built: honesty, charity, integrity and family. We look to our parents, for in the final analysis, everything depends on the success of our homes. We look to job creators of all kinds; we’re counting on you to invest, to hire, to step forward. And we look to Democrats and Republicans in government at all levels to put the people before the politics.

I believe in America. I believe in the people of America. And I ran for office because I’m concerned about America. This election is over, but our principles endure. I believe that the principles upon which this nation was founded are the only sure guide to a resurgent economy and to renewed greatness.

Like so many of you, Paul and I have left everything on the field. We have given our all to this campaign. I so wish—I so wish that I had been able to fulfill your hopes to lead the country in a different direction, but the nation chose another leader. And so Ann and I join with you to earnestly pray for him and for this great nation.

While the Democrats retain control of the Senate, Republicans remain in control of the 435-member House, in part thanks to redistricting. Florida had two closely watched House races. NBC is projecting Republican Congressmember Allen West has lost a close race with challenger Patrick Murphy, but West has refused to concede so far. Former Democratic Representative Alan Grayson, who lost in 2010 after one House term, has won in a newly created Orlando-area district. In Minnesota, Republican former presidential candidate Michele Bachmann hung on to her House seat by narrowly defeating challenger Jim Graves. With 98 percent of precincts reporting, Bachmann led Graves by just over 3,000 votes out of nearly 350,000 votes cast.

This is Democracy Now!, democracynow.org, The War and Peace Report. When we come back, we’ll talk about the significance of the elections at the presidential, Senate and congressional levels. We’ll also talk about some historic ballot initiatives around the country. Stay with us. 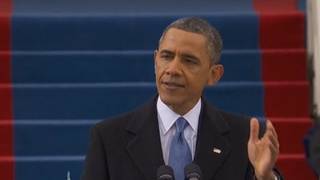