On the floor of the Republican National Convention, Wisconsin Gov. Scott Walker tells Amy Goodman that abortion is not an important issue to U.S. voters. We then go to a nearby protest, where hundreds of people voice a different view, as Planned Parenthood supporters rally for reproductive rights. We hear from Randy Moody, national co-chair of Republicans for Planned Parenthood, and Louisiana resident Patricia Gil of UniteWomen.org. [includes rush transcript]

AMY GOODMAN: This is Democracy Now!, democracynow.org, broadcasting from PBS station WEDU in Tampa, Florida. We’re “Breaking With Convention: War, Peace and the Presidency,” Democracy Now!'s special daily coverage of the Republican National Convention, inside and out. I'm Amy Goodman.

AMY GOODMAN: On choice, on abortion, with Paul Ryan being the vice-presidential candidate, do you share his views?

AMY GOODMAN: But it’s an important issue for you. You have expressed your views very strongly against abortion.

GOV. SCOTT WALKER: It is an issue that the media wants to talk about, because they want to give Barack Obama a pass from the abysmal failure—42 consecutive months of unemployment above 8 percent, 12 million Americans unemployed. We should be talking about that, because that’s what’s at stake in this election.

AMY GOODMAN: That was Wisconsin Governor Scott Walker on the floor of the Republican convention.

Well, some would disagree with Walker’s remark that abortion is not an important issue for voters—in fact, the hundreds of people who rallied yesterday in Tampa, supporting Planned Parenthood and rallying for reproductive rights at a park less than two miles from the convention site. Many wore bright pink T-shirts that said, “I stand with Planned Parenthood, and women are watching.” One of the speakers was Randy Moody, national co-chair of Republicans for Planned Parenthood. Democracy Now!’s Amy Littlefield asked Randy Moody to respond to the claim by some Republicans that voters are more focused on the economy, not on reproductive rights.

RANDY MOODY: Well, women’s health is an economic issue. Women—women have to carry their load in the workplace in this economy the way it is. And to do so, they have to be able to control their own reproductive health, their fertility. They have to be able to plan their families. And all of the—it’s key. It’s key to economics. And I just don’t understand the people saying, “Oh, this talk about abortion or birth control is a distraction.” Not a distraction. It is the main issue here. We’re talking about ability of women, who now make up over 50 percent of this country and a good chunk of the workforce, to be able to do that and to continue, because they’re keeping their families going in many cases. And if they don’t have access to family planning, they don’t have access to sexuality education, you know, well, this country is in bad shape.

AMY LITTLEFIELD: What was your response to hearing Todd Akin talk about “legitimate rape”?

RANDY MOODY: Well, he’s crazy. And I think it was very obvious that, even though he was on the Science Committee, has no idea about science. The thing that I didn’t understand was the thought that this was—he misspoke. No, that’s what he believes. He believes that. And it’s totally wrong. And so many of the Republicans in the Congress, particularly in the House, ignore science. They don’t—they just ignore it. And so, what they’re guided by is their own religious principles. That’s fine. But when they’re in a position to impose those religious views on everyone else, then that’s dangerous. There shouldn’t be one party that’s pro-choice and one party that’s not. That’s why I stay a Republican, because I think there needs to be a voice within the Republican Party talking about that.

AMY LITTLEFIELD: Are you supporting Mitt Romney for president and Paul Ryan? And what do you think would happen to reproductive rights under their ticket?

RANDY MOODY: I support—I support and vote for pro-choice candidates, so you can make up your own mind about who I’m voting for for president.

AMY LITTLEFIELD: And are you concerned about what will happen if Romney becomes president and Paul Ryan becomes vice president, in terms of women’s rights?

RANDY MOODY: Oh, very much so. I mean, all you have to do is look at the bills that Ryan has co-sponsored—most restrictive, in term—Defund Planned Parenthood, human life amendment types of things, all the crazy stuff. And he supported that. Yet he comes across as Mr. Clean, Mr. Family Man, Mr. Economic Wonk. Look, he’s a—he’s an extremist.

AMY GOODMAN: That was Randy Moody from Nebraska, national co-chair of Republicans for Planned Parenthood, one of about 400 people who rallied near the site of the Republican National Convention yesterday in support of reproductive healthcare. Democracy Now!’s Amy Littlefield also spoke with Planned Parenthood supporter Patricia Gil of Louisiana.

AMY LITTLEFIELD: And what is your response to Todd Akin’s comment about legitimate rape? It was mentioned here a few times today.

PATRICIA GIL: As the mother of a daughter who was abducted at knifepoint and raped repeatedly, Todd Akin needs to take his classification of rape and understand that there is no classification. Rape is rape. I traveled from Louisiana to Florida, thinking I was heading into Hurricane Isaac. As I’m standing here now, Hurricane Isaac is passing by my house in Baton Rouge. I don’t know what’s happening at my house. I cannot even think about that, because I have to focus on what we’re doing. Our voices have to be heard. That is why we partner with and get together with Planned Parenthood, with NOW, with just organizations across this country, because if our voice is not heard, we will have no rights left. 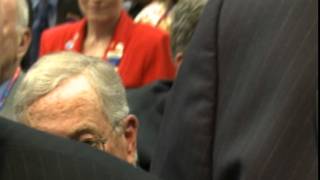