Sterling College in Vermont announced on Tuesday it will soon become the third college in the United States to divest its endowment from 200 fossil fuel companies identified by the environmental group 350.org. Unity College in Maine and Hampshire College in Massachusetts were the first two schools to divest. Divestment campaigns are ongoing on more than 200 other campuses. “I think it’s no surprise, really, that young people are starting to say, ’We’ve got to spend another 60, 70 years on this planet. We better do something fast,’” says Bill McKibben of 350.org. “And that something means standing up to the fossil fuel industry that’s been in the way of rational change for a quarter-century now.” McKibben is helping organize a Presidents’ Day rally against the Keystone XL pipeline later this month, one he predicts will be the “biggest climate rally probably ever” in the United States. [includes rush transcript]

AARON MATÉ: We end today’s show looking at a different divestment campaign, this one about climate change. In recent months, college students at over 200 campuses have begun pushing administrators to divest from fossil fuel companies. On Tuesday, Sterling College in Vermont announced it will soon become the third college in the U.S. to divest its endowment from 200 fossil fuel companies identified by the environmental group 350.org. Unity College in Maine and Hampshire College in Massachusetts were the first two schools to divest.

Welcome back to Democracy Now! You’re just coming from Cooper Union last night, where the place was packed, this historic building where President Lincoln spoke—talking about what?

BILL McKIBBEN: Well, talking about this burgeoning divestment movement. It’s been kind of amazing to watch in the last six weeks as the number of campuses has mushroomed to the point—at 234 campuses now. The Nation said last week that this may be the largest student movement in several decades. In one sense, it came very quickly out of nowhere. In another sense, you know, last year was the hottest year we’ve ever seen in America. We watched the drought, we watched Sandy. I think it’s no surprise, really, that young people are starting to say, “We’ve got to spend another 60, 70 years on this planet. We better do something fast.” And that something means standing up to the fossil fuel industry that’s been in the way of rational change for a quarter-century now.

AMY GOODMAN: What do mean by divest from fossil fuel companies? Which companies are you targeting?

BILL McKIBBEN: We have a list of 200 companies with the largest carbon reserves in the world. The argument that was in that Rolling Stone piece, and in a sort of tour that we did around the country all fall about it, was that these companies now have—this industry has five times as much carbon in its reserves as the most conservative scientists on earth says would be safe to burn. Once you know the numbers, there’s no longer any sort of doubt about how this story comes out: Unless we rewrite the script, if we follow their business plan, the planet tanks.

That’s why there is this upsurge, not only around divestment, but around things like the fight against the Keystone pipeline. You know, we’re going back to Washington for the biggest climate rally probably ever in this country a week from Sunday on the Mall in D.C. It’s—it’s coming up fast, and it’s got to come up fast, this movement, because unlike other problems we face, there’s a time limit on this one. If we don’t get it right soon, then we don’t get it right at all.

AMY GOODMAN: What’s Obama going to do around Keystone XL? He put off the decision, said he would put it off 'til after the election. That's come. He said now spring. What do you believe will happen?

BILL McKIBBEN: I believe what will happen will depend entirely on what kind of movement we build. My sense of Washington is that when you push, sometimes things happen. It took 1,253 people going to jail, the largest civil disobedience action in 30 years, to slow down this northern portion of the Keystone pipeline. It’s going to take a real effort to stop it. But that real effort is being made by people in all 50 states and by our brothers and sisters in Canada. It’s been exciting to watch over these last 15 months. Something’s building. I’m not certain that it’s building fast enough to catch up with the physics of climate change. But watching those campuses, watching those kids, it’s awfully exciting.

AARON MATÉ: So, Obama has now delayed his decision twice. Do you think that’s linked to these protests that you’ve been involved in?

BILL McKIBBEN: I think everyone—as Van Jones said the other day, this was a done deal 18 months ago. We’ve managed to make it come undone for a while and, in the process, kept 400 million barrels of oil in the ground that would otherwise have gone out. So, that’s, you know, worth going to jail for, but it’s not going to stop global warming. We’ve actually got to start leaving carbon permanently in the ground.

AMY GOODMAN: We only have 10 seconds. What’s the plan for February 17th, this rally in Washington?

BILL McKIBBEN: It’s going to be exciting. And if you go to “forward on” — if you Google “”http://act.350.org/signup/presidentsday”>forward on climate,” you’ll find out all the logistical details.

AMY GOODMAN: Bill McKibben, I want to thank you for being with us, co-founder and director of 350.org, author of Eaarth: Making a Life on a Tough New Planet. 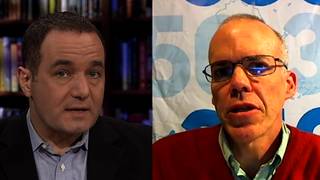