Sportswriter Dave Zirin: Prayers For the People in Boston, Baghdad and Mogadishu

Sports editor Dave Zirin of The Nation magazine responds to the Boston Marathon bombings and discusses the race’s historic significance. “First, prayers for the people in Boston, Baghdad and Mogadishu who are suffering today,” Zirin said. “Second, I think people have to realize that an attack on the Boston Marathon is really an attack not on Boston or the United States, but on the world.” [includes rush transcript]

AMY GOODMAN: Thank you so much—conclude with Dave Zirin, who is a sports columnist for The Nation magazine, host of Edge of Sports Radio on Sirius XM. He was writing yesterday as soon as this took place, covering both sports and politics.

DAVE ZIRIN: Well, first, prayers for the people of Boston, Baghdad and Mogadishu who are suffering today. Second, I think people have to realize that an attack on the Boston Marathon is really an attack not on Boston or the United States, but on the world. We have a tendency in this country to call our national champions “world champions.” And yet, here’s this Boston Marathon, which sounds so provincial—the Boston Marathon—but it comprises people from 96 countries. The world record holders for both the men and women are both from sub-Saharan Africa. Over 20,000 people compete. You can speak to people around the world who are part of this global marathon community, and they know that Heartbreak Hill is the fourth hill in Newton that’s so difficult to go over. They know that when you run past Wellesley College, for example, that the cheers can be so loud you can’t even hear out of your own ears. They know that the Boston Marathon actually means something that’s very communitarian. And so, when you take something that’s so communitarian and you turn it into something that now, going forward, is going to feel insecure, dangerous, something you don’t want to bring your family to, it really is an attack on collective space with global dimensions.

AARON MATÉ: Dave, talk to us about the history of the Boston Marathon. You wrote about Kathrine Switzer, who ran in 1967.

DAVE ZIRIN: I’m glad you asked that question. You know, I have a friend from Vietnam who always reminds me that Vietnam is a country, not a war. And I hope we remember the Boston Marathon as a place with history that goes back to 1897 and not just the site of a national and international tragedy. And Kathrine Switzer is part of that history, part of what speaks to the best angels of our nature in the world we would like to live in.

The Boston Marathon was all men through 1966. And in 1967, Kathrine Switzer decided that she was going to enter the race, so she filled out her forms as K.V. Switzer, wore a very loose-fitting sweatsuit, and entered the race. And as she was running, one of the marathon organizers actually jumped off a truck, the back of a truck, and grabbed her physically, screaming, “Get the hell out of my race!” And the men around Kathrine Switzer actually pushed him away. And there’s a brilliant set of photographs of one man with this look on his face like he was so upset that this woman was daring to run, and these other men actually pushing him away. And in the midst of this throng, you have Kathrine Switzer with this resolute look on her face, focused, and continuing to run and finishing the 26-mile race. It’s one of those landmark moments in sports and politics, landmark moments in the women’s rights movement, and one of those moments that we should remember for the Boston Marathon, at that moment where it was what we want the world to be. Unfortunately, yesterday was the world that we currently inhabit.

AMY GOODMAN: Kathrine was running with her coach and her partner, and they were the ones who pushed the head of the Boston Marathon away. And she broke all barriers, along with another woman, [whose] head was hidden, as well. Dave, I want to thank you for being with us. We’re going to head on to Somalia, where a terrible series of explosions took place on Sunday. But I wanted to ask, your piece that you wrote on Monday, “The Boston Marathon: All My Tears, All My Love,” for your final comment.

DAVE ZIRIN: I just feel so strongly that this is one of those moments where we need to come together in true empathy, look at Boston, look at Baghdad, look at Mogadishu, look at Yemen, and ask ourselves the question: Is this the kind of world we really want to live in? When we’re together in collective space, we should feel empowered, not frightened. And I hope we take forward the idea of enforcing the idea that coming together collectively is a beautiful thing and one we should treasure.

AMY GOODMAN: Well, Dave, thanks so much for being with us, sportswriter Dave Zirin. Charles Pierce, we want to thank you, as well, writing for Esquire.com. And thank you very much to Dr. Michael Gibson, who is a doctor, a cardiologist, a professor of medicine at Harvard Medical School, full-time cardiologist and chief of clinical research in Cardiovascular Division at Beth Israel Deaconess Medical Center. This is Democracy Now!, democracynow.org. Dr. Gibson is also founder of wikidoc.org, the world’s most widely viewed open source textbook of medicine, on call Monday treating victims of the bomb blasts at the Boston Marathon. When we come back from break, we go to other bomb blasts that took place in Somalia, the worst in two years, just this past Sunday, and we’ll also speak with another doctor who has saved so many lives in Somalia. Stay with us. 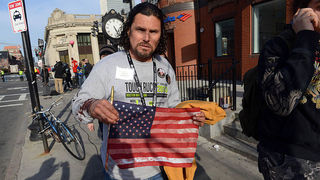