For the second time in 48 hours, Taliban militants have attacked Karachi’s international airport, the largest in Pakistan. Earlier today a group of gunmen on motorbikes opened fire on an academy run by the Airport Security Force. An assault by Taliban militants on Sunday left at least 38 people dead including the attackers. The Pakistani Taliban has claimed responsibility for both attacks, saying it was avenging military operations in North Waziristan and a U.S. drone strike that killed its leader, Hakimullah Mehsud, late last year. The Pakistani government moved toward peace talks with the Taliban earlier this year, but the process has faltered with a split inside the Taliban over whether to take part. We speak to Ayesha Siddiqa, a Pakistani political and defense analyst. Siddiqa is the author of “Military Inc.: Inside Pakistan’s Military Economy.”

AARON MATÉ: For the second time in 48 hours, Taliban militants have attacked part of Karachi’s international airport, the largest in Pakistan. Earlier today, a group of gunmen on motorbikes opened fire on an academy run by the Airport Security Force. No fatalities were reported.

On Sunday, an assault by Taliban militants left at least 38 people dead, including the attackers. The attack began when 10 gunmen wearing military uniforms and armed with automatic rifles and rocket-propelled grenades shot their way into the airport’s old terminal. Gun battles raged for hours until security forces gained control early on Monday morning. According to government reports, most of the victims killed in the terminal were Airport Security Forces and some airline staff.

AMY GOODMAN: The Pakistani Taliban has claimed responsibility for both attacks, saying it was avenging military operations in North Waziristan and a U.S. drone strike that killed its leader, Hakimullah Mehsud, late last year. The Pakistani government moved toward peace talks with the Taliban earlier this year, but the process has faltered with a split inside the Taliban over whether to take part.

Meanwhile, the Pakistani military carried out airstrikes earlier today in tribal areas in the northwest of the country, killing at least 15 people. To find out more about implications of the assault, we’re joined now by Ayesha Siddiqa, a Pakistani political and defense analyst, author of Military Inc.: Inside Pakistan’s Military Economy. She’s joining us via Democracy Now! video stream from Islamabad.

Welcome to Democracy Now! Talk about the significance of these attacks, Ayesha.

AYESHA SIDDIQA: Well, you know, the one significance definitely is that right when we thought that things were drawing down, things were calming down, perhaps, there was end to the power of the Taliban, we are reminded yet again the Taliban are actually very active and that we’ll probably be daydreaming if we think that the Taliban’s powers has come to an end. Because Karachi is a city which is the main urban center, has been one of the largest air and sea hubs for the country, and since the 1980s—that’s when the first Afghan War was fought, the first Afghanistan war was fought, you know, with the help of American war, with the help of Pakistan’s ISI—starting from then, there are different kinds of militants which have been transiting through Karachi, living in Karachi, and so, you know, it’s daydreaming if we think that they have little control over or they have no influence over the city.

AARON MATÉ: Ayesha, can you talk about who the attackers are? Some of them, I understand, were nationals from Uzbekistan. Can you explain the complex array of militants that are inside Pakistan right now, and specifically the presence of Uzbeks in the Taliban?

AYESHA SIDDIQA: You know, there are a range of militants that have come from all over the world. Initially there were a lot of Arabs, then being joined by Uzbeks. Then you have Chinese militants from Xinjiang province who are also in the tribal areas. There are seven—when we say the tribal areas, in seven territories or seven agencies, which historically were never directly controlled by the state. Yet, there is an interaction between the state; formally, it is considered part of the Pakistani territory.

Anyway, the Arabs, I think, the two—couple of things that we need to look into. One, these people were Uzbeks. There are lot of other people in Karachi, as well, like you have the Rohingya Muslims from Burma, which—Myanmar, that are also in Karachi. So, there are a lot of other nationalities which live in Karachi. Uzbeks are not just in the tribal areas in Waziristan, but they are in other parts of, you know, Pakistani heartland, of Punjab, as well. So, they’re spread. And these are people who have been guests of the Taliban, different Taliban groups.

I think what’s important to recognize is that initially, when, after 9/11, this war was starting to be fought, the war on terror, the initial agreement between the American government and the Pakistani government—and when I say “agreement,” I mean an informal arrangement—was that all al-Qaeda, all the Arabs, will be—and foreigners—will be handed over. You know, they will be surrendered. The Arabs largely were, but the Taliban, Americans kept their hands off them, until it was realized much later the Taliban were also part of the problem. And so that war has been fought. But because the border is porous, because Afghanistan, you know, bordering areas, these tribal territories are adjacent to—are next to the Afghan border, which then is connected with Central Asia, so you have all these different movements, insurgent movements, Uzbekistan, Chinese, etc., who are coming, who have been coming.

You talked about bombing in the morning. The air force has bombed—a week ago, it did do bombing in North Waziristan. North Waziristan is—which is considered to be hub for the Haqqani. It’s an R-and-R site for the Haqqani Network. Now, it’s interesting that the focus of the bombing was not the Haqqani Network. It was the Chinese militants, which the Chinese are unhappy with, the Chinese government is unhappy with. Now, this bombardment, this assault by the air force, it’s neither here nor there. We’ll begin to see results—I don’t think—I don’t see a policy, as such, right there in terms of fighting militancy or fighting Talibanization. So, and as long as—you know, and Taliban have links with different militant groups all over the region. So they will keep pouring in. And the fact that these Uzbeks are allowed to stay around in the Pakistani territory, that is something which is worth being concerned about.

AMY GOODMAN: Last November, Hakimullah Mehsud and six other militants were killed when U.S. missiles hit their vehicle in North Waziristan. Mehsud had a $5 million bounty on his head and was accused of being responsible for many deaths. The attacks came just as the Pakistani government had relaunched peace talks with the Taliban. Pakistani Interior Minister Chaudhry Nisar called the strike an attack on regional peace. Can you talk about the significance of this?

AMY GOODMAN: And talk about who he is—who he was.

AYESHA SIDDIQA: There is this Mehsud—there are Waziri tribes, and then there are the Mehsud tribes. Now, these people were part of—you know, they were part of the larger tribe. Mehsud and Waziri were just connected with tribes across the border in Afghanistan, as well. Now, the Mehsuds, because of the tension between Mehsuds and Waziris, what the government—what the state of Pakistan has done over years is they have put the—given Waziris the support versus the Mehsuds. So, Mehsuds—and within the Mehsuds, Hakimullah Mehsud, people like Hakimullah Mehsud and a few others, had become antagonistic to the state. So, Hakimullah Mehsud was the leader. Once he died, again, in a drone attack, then he was—his shoes were filled in by one of his relatives, Baitullah Mehsud, who died last year.

AYESHA SIDDIQA: Well, Hakimullah Mehsud—it’s interesting that they say that, because Hakimullah Mehsud died—you know, after Hakimullah’s death, there wasn’t this kind of reaction. I’m sure there is something else which is propelling them. And one of the reasons I believe is propelling them is this discomfort that, A, the government is—or the military is trying to—or its intelligence agencies are trying to make inroads into the militant group itself and dividing them. After Baitullah Mehsud’s death, Maulana Fazlullah from Swat was made—who’s not a Mehsud—was made the head of TTP, Tehrik-i-Taliban Pakistan. Now, there is that division. There is Khalid Mehsud. There are other groups which do not support recently the Khalid Mehsud group, have delinked itself from the TTP. So there were breaks emerging. And I think what they have done with this attack is reasserted themselves and sent a message amongst their followers that they’re still alive, they’re still kicking, and that they can still do some action.

AMY GOODMAN: Ayesha, we just have a minute. A quick question: Do you see this as an escalation of violence, as the beginning of increased attacks and the effects of the drone strikes on these?

AYESHA SIDDIQA: I think there will be some attacks, but I am not exceptionally worried. I think what the government needs to do is seriously think about its larger policy on Talibanization or supporting one group or the other. We cannot have this duality in our policy.

AMY GOODMAN: We thank you so much, Ayesha Siddiqa, for joining us, Pakistani political and defense analyst, author of Military Inc.: Inside Pakistan’s Military Economy.

This is Democracy Now! When we come back, the student debt in the United States has surpassed even credit card debt. It’s over $1 trillion. We’re going to speak with a filmmaker who’s made the film Ivory Tower. Are there cracks in it? Is college even worth it? he asks. Stay with us. 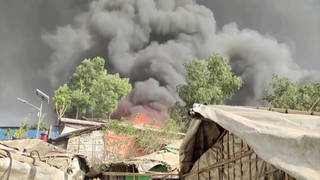