Sixty-nine years ago at 8:15 a.m., the United States dropped an atomic bomb on the Japanese city of Hiroshima. Destruction from the bomb was massive: Shock waves, radiation and heat rays took the lives of some 140,000 people — nearly half of the town’s population. Three days later, the United States dropped a second atomic bomb on the Japanese city of Nagasaki, killing another 74,000. At Hiroshima’s Peace Memorial Park, we hear from blast survivor Koji Hosokawa, who was 17 years old at the time. His 13-year-old sister, Yoko, died in the bombing. Hosokawa spoke to us next to the A-Bomb Dome, one of the few structures in the city that survived the blast.

NERMEEN SHAIKH: Sixty-nine years ago today at 8:15 in the morning, the U.S. dropped the world’s first atomic bomb on the Japanese city of Hiroshima. Destruction from the bomb was massive. Shock waves, radiation and heat rays took the lives of some 140,000 people—nearly half of the town’s population. Three days later, the U.S. dropped a second atomic bomb on the Japanese city of Nagasaki, killing another 74,000.

AMY GOODMAN: Earlier this year, Democracy Now! traveled to Hiroshima. We visited the Hiroshima Peace Memorial Park. And among others, I interviewed a survivor of the blast named Koji Hosokawa. We spoke next to the A-Bomb Dome, one of the few structures in Hiroshima that survived the blast. I began by asking him where he was at the time the atomic bomb fell.

KOJI HOSOKAWA: [translated] I was, at one point, three kilometers away to the northeast from this area. I was exposed to the bomb there. And there was a building, which was a very stout building. And so, miraculously, I survived.

AMY GOODMAN: How old were you?

AMY GOODMAN: What were you doing in that building?

KOJI HOSOKAWA: [translated] I have to explain about it. Around the end of World War II, men throughout Japan were drafted and sent to battlefields, adult men, so there was a labor shortage. And so, in order to have some people working in various places, 12-year-olds or 13-year-olds or older than these students were mobilized and worked at various places, so they could not study. And so, I was one of the mobilized students, and I was working at that building. That was a communication bureau. And today it is now NTT, a telephone company. And people thought the imminent landing of the U.S. forces, Allied forces. And I was there in order to have some communication lines established. And so, I miraculously survived.

But my younger sister, she was also mobilized to work at some place. And she was at 700 to 800 meters away from the hypocenter, very close to the hypocenter, and she was exposed to the bomb there. And she was with a teacher and the students, the other students. And in all, 228 people were there together with her. And all of them were exposed to the bomb. And my biggest sorrow in my life is about my younger sister died in the atomic bomb.

AMY GOODMAN: On that day, on August 6?

KOJI HOSOKAWA: [translated] Yes, she died on that day. But in many cases, the relatives or family members could not find their children’s bodies even. But in my sister’s case, fortunately, she was carried to a relief station outside Hiroshima City, and she could receive some care. And she died there. Many people were missing. But I thought it was very fortunate that we could have her body. So, at that time, that was a fortunate case.

AMY GOODMAN: How old was she?

AMY GOODMAN: She died of radiation sickness after or the actual effects of the blast on August 6th?

AMY GOODMAN: Where were your parents?

KOJI HOSOKAWA: [translated] They were outside Hiroshima, suburbs, Miyajima. Do you know? Miyajima island. So the house was OK.

AMY GOODMAN: How did they find you?

AMY GOODMAN: What did your parents say when they saw you?

KOJI HOSOKAWA: [translated] My mother was away to the relief station. And so, soon after that, my sister came home in a coffin. She was burned all over her body, but fortunately, her face was OK. She was almost naked. Aside from her face, she was almost naked, and almost all her body was burned. This is only one of the cases, just one case of many. Many people experienced a similar situation.

AMY GOODMAN: This is almost 69 years later. It was the United States that dropped the atomic bomb. How do you feel when Americans come here to Hiroshima?

KOJI HOSOKAWA: [translated] I hate war, rather than the people of the United States. I hate war. War makes everyone crazy. So, in the war, innocent people are killed. And the ultimate case, I believe, is A-bombing.

AMY GOODMAN: Mr. Hosokawa, as a hibakusha, as a A-bomb survivor, do you feel the United States should apologize for dropping the atomic bomb on your city?

KOJI HOSOKAWA: [translated] The A-bomb was dropped in Hiroshima and also one in Nagasaki. And I think that atomic bombs were dropped not just on our cities, but on the whole human beings. And so, I have many things to talk about, about my experience of the A-bomb, but if the next one, the third A-bomb is to be dropped, then the Earth will be annihilated. I want people to understand, this is going to be—you know, the Earth is going to be annihilated. So whenever I talk, I want them to understand this.

The Peace Memorial Park, until the A-bomb, people lived here. Everything was destroyed. Everyone died around this area. The Peace Memorial Park is a beautiful park today, with so many trees. But later, they planted small trees, and after decades these trees became bigger, and now a very beautiful park today. So, I tell the visitors about this, too. I want them to understand people lived here. Please tell the people that people used to live here. War makes everyone crazy.

AMY GOODMAN: Hiroshima survivor Koji Hosokawa. He was speaking at the Hiroshima Peace Memorial Park. His 13-year-old sister’s diary has been published as a book; it’s called Yoko’s Diary: The Life of a Young Girl in Hiroshima During World War II. Special thanks to Naoko Koizumi for translating our interview and Makiko Nakano of Democracy Now! Japan, as well as John Hamilton and Denis Moynihan. If you’d like to see our three days of coverage from Japan, go to democracynow.org.

Democracy Now! is hiring. We have an opening for an on-air graphic designer and CG operator. Visit democracynow.org for more information. 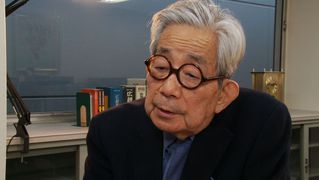