In Australia, conservative Prime Minister Tony Abbott has been ousted during snap elections called for by his own Liberal Party. Public opinion of Tony Abbott had reached a record low amid controversial decisions to roll back climate change legislation, oppose same-sex marriage and turn back boats carrying refugees. Former Communications Minister Malcolm Turnbull will become the new prime minister. For more, we speak with Tariq Ali, historian, activist and editor of the New Left Review.

AMY GOODMAN: But we have this breaking news, and we’d like Tariq Ali to respond. Malcolm Turnbull is set to become Australia’s new prime minister after beating Tony Abbott by 54 votes to 44 in a snap Liberal Party ballot and promising Australia a new, respectful, slogan-free leadership style. Australia is going to have—once again, this is breaking news—a new prime minister, after Tony Abbott was ousted as leader of the Liberal Party by the Cabinet minister, Malcolm Turnbull. Can you talk about the significance of this, Tariq? You’ve just returned from Australia.

TARIQ ALI: I have. I spent a month there speaking in different parts of the country, Amy. And it won’t surprise you to know that wherever I went, I denounced Abbott, not just as a politician, but as a joke figure. I mean, some of the things Abbott has been saying are that the Third Reich and Hitler were better than ISIS. I mean, you know, this sort of stuff doesn’t go down well anywhere. His allies were shocked, and many people in his conservative party were shocked, too. So it was obvious that his time had come. He was extremely unpopular. And all the opinion polls were showing that he would have been defeated in the next elections. So I think the Liberals, who are conservatives, have decided to do the clever thing and replace him with Turnbull.

What is known about Turnbull is that he is much better on many questions. Whether he’ll be better on wars, I do not know, and it’s doubtful, but he certainly is a republican and was one of the leading politicians in Australia who tried to rid Australia of the monarchical encumbrance that many Australians resent and say that the queen of Britain should no longer be the head of state. He lost that battle, but he fought very hard indeed. And I don’t want to create any illusions. He’s just more intelligent, a better conservative leader for the Liberal Party. Labor’s leader, of course, is a classic example of the extreme center, Bill Shorten. He’s very unimpressive, has very little to say. So I think that the conservatives thought that Turnbull would be much better placed to take him on, rather than Abbott. And many Australians will be celebrating.

AMY GOODMAN: Tariq Ali, I want to thank you for being with us, a British political commentator, historian, novelist, editor of the New Left Review. His latest book is The Extreme Centre: A Warning.

When we come back, we go directly to Oklahoma. Is an innocent man scheduled to die? Stay with us.

NEXTIs Oklahoma Set to Execute an Innocent Man? Inside the Case of Richard Glossip 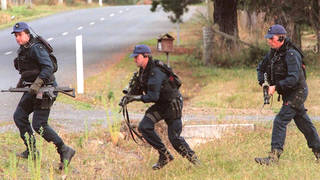