Before his own imprisonment by the Egyptian government, Al Jazeera journalist Peter Greste had reported on the refugee crisis around the world. He criticized his own Australian government for refusing press access to detention centers where refugees are being held. “They keep [asylum seekers] on islands away from the press. The press have been denied access to those areas. And I felt very, very strongly about this, that we’re not being denied access on national security grounds. It’s impossible, I think, to justify denying access to journalists to those detention centers, because in a democracy the government acts in our name, the government works for us, as voters, as taxpayers. And so, unless there is a very clear, very specific reason for denying us access on national security grounds—and I simply can’t see why there would be in the case of asylum seekers—then we need to know what is being done in our name.”

AMY GOODMAN: Our guest for the hour is Peter Greste, Al Jazeera journalist, known around the world because he was one of three Al Jazeera journalists imprisoned in Egypt. He was in prison for 400 days. He is here in New York seeking a pardon from the Egyptian president, el-Sisi, who is at the U.N. General Assembly. Whether he gets that, we’ll see. His two other colleagues, while held longer than he was, Baher Mohamed and Mohamed Fahmy, by a number of weeks, they were pardoned last week along with 100 others in Egypt.

I wanted to ask you about coverage of prisons and also of refugees. And you’ve reported all over the world. You won a major award covering Somalia, for example. You are the son of an asylum seeker in Australia?

PETER GRESTE: Yeah, of a refugee. My father is Latvian. His family fled Latvia when the Russians annexed the Baltic states, back during World War II—excuse me—and they came out to Australia as refugees in the wake of World War II. So, you know, in a way, of course, everybody, apart from the Aborigines in Australia, are migrants of some sort, whether they’re refugees or migrants seeking a better life. Everybody has come to Australia, I think, in much the same case—same way that they’ve come here, at some point, to this country.

AMY GOODMAN: And you criticized the former prime minister of Australia, Tony Abbott.

PETER GRESTE: Yes. Well, I’ve—it was interesting. This was at the National Press Club, where somebody gave a speech—

PETER GRESTE: In Australia, yes, the National Press Club in Canberra. And, in fact, we had Julie Bishop, our foreign minister, sitting in the audience, and someone asked me about coverage of the refugee detention center in Nauru, an island to the north of Australia where asylum seekers are being held. And I made the point that—

AMY GOODMAN: So they keep them on islands in the South Pacific.

PETER GRESTE: That’s right, they keep them on islands away from the press. The press have been refused, have been denied access to those areas. And I felt very, very strongly about this, that this is not—we’re not been denied access on national security grounds. It’s impossible, I think, to justify denying access to journalists to those detention centers, because in a democracy the government acts in our name, the government works for us, as voters, as taxpayers. And so, unless there is a very clear, very specific reason for denying us access on national security grounds—and I simply can’t see why there would be in the case of asylum seekers—then we need to know what’s being done in our name. The only reason we can think of is that those detention centers might actually be embarrassing to the Australian government. Well, frankly, that’s not good enough. In a democracy, we need to understand what’s being done.

AMY GOODMAN: They either put them in detention centers or turn them away, the boats.

PETER GRESTE: That’s right, exactly. And anybody who tries to get into Australia by boat is automatically placed in those detention centers and either sent back to their country of origin or resettled in third countries. They will not be allowed into Australia. It’s a very controversial policy. The government—the government of Tony Abbott has insisted that it’s the only practical approach to stopping the boats. They say that this is for the safety of those—of the asylum seekers themselves, because they argue that in fact by stopping the movement of refugees, they’re effectively shutting down the people smugglers, which are—who are responsible for so many deaths at sea. Whether or not that’s actually saving lives is a debatable question. Whether this is the best way of doing that is something that is a debate that I think is still ongoing. And one of the key elements to that debate is whether it’s appropriate to keep those asylum seekers on those islands in those detention centers, in conditions that, frankly, we know are quite severe, but we really haven’t been able to examine properly because the press simply isn’t allowed access.

AMY GOODMAN: Finally, you laid a wreath along with Shirley Shackleton, the widow of Greg Shackleton.

AMY GOODMAN: A story I think our viewers and listeners know well, about East Timor. He was killed in the lead-up to the—Indonesia’s invasion of East Timor by Indonesian forces.

AMY GOODMAN: You laid a wreath at the graves of war—or monument to war correspondents who have died.

PETER GRESTE: That’s right. This was something—and I’m getting goosebumps actually remembering all—remembering this. This is—and something I’m very proud of. The Australian government has, after a long, long time—the Australian War Memorial has agreed to a wreath—sorry, to a memorial to not just correspondents who have been killed in action, to war correspondents who have been killed in action, but to all those who serve in conflict zones as reporters. And I think it’s an extremely timely reminder of why—of the role that foreign correspondents, that war correspondents play in keeping people informed of what’s going on. We have to have a place that’s—we have a place that’s accepted, the government accepts that we have a legitimate role to play. And it’s right and proper, I think, that that role is memorialized.

AMY GOODMAN: We have two seconds. I want to thank you so much, Peter Greste, Al Jazeera journalist. 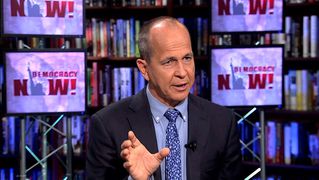