Flint’s water contamination crisis began in April 2014 after Darnell Earley, an unelected emergency manager appointed by Snyder, switched Flint’s water source to the long-polluted and corrosive Flint River in a bid to save money. Earley is now the emergency manager of Detroit Public Schools. This week, Detroit’s teachers have staged a series of “sickouts” to protest the vast underfunding of the public schools, which have black mold, rat infestations, crumbling buildings and inadequate staffing. We are joined by Curt Guyette, an investigative reporter for the ACLU of Michigan whose work focuses on emergency management and open government. Michigan has the most sweeping emergency management laws in the country, which allow the governor to appoint a single person to run financially troubled cities.

JUAN GONZÁLEZ: Well, we’re also joined by Curt Guyette, an investigative reporter for the ACLU of Michigan. His work focuses on emergency management and open government. Michigan has the most sweeping emergency management laws in the country, which allow the governor to appoint a single person to run financially troubled cities. Emergency Manager Darnell Earley, who presided over the Flint water switch, is now the emergency manager of the Detroit public school system. This week, Detroit’s teachers have staged a series of “sickouts” to protest the vast underfunding of the public schools, which have black mold, rat infestation, crumbling buildings and inadequate staffing. Detroit teachers say they have up to 45 or 50 students in some classrooms.

AMY GOODMAN: So, Curt Guyette, can you talk about how this man, who is the one who ultimately pushed the switch, relying on the—turning from the Detroit water system to Flint’s river, that has poisoned so many people, is now in charge of the Detroit Public Schools? And we’re hearing health problems, not to mention education problems.

CURT GUYETTE: Well, one of the things about the emergency manager law is that these managers were given extreme unchecked authority. And the thinking was, the reason for doing that is they were given the ability to come in, clean up the problems and get out. And so there was an 18-month time limit put on their terms. Except that this governor is exploiting what amounts to a loophole in that law. So what happens is that these emergency managers serve for 17 months and 29 days, and the day before their term expires, they resign. A new emergency manager is put in place, and the clock starts ticking all over again. And they just shuffle them from one place to another. So Earley goes from Flint to run DPS. And it just perpetuates this control. It can go on, really, forever, if they want it to, denying people of their democratically elected representation, because the school board, which has been fighting emergency management every step of the way, gets completely marginalized. They have zero authority whatsoever. And that goes to the heart of the problem of this law. It eliminates the democratic checks and balances that make a democracy functional.

And the other thing is, what we’re seeing here is really the imposition of austerity. This is what austerity looks like. So you have all the problems in these schools that you just reported on, because they’re treating it like a managerial problem rather than a structural problem. I’ve used before the analogy: It’s like being the captain of the Titanic, and you hit an iceberg. It doesn’t matter who’s at the helm; the ship is going down unless you plug the hole. And they haven’t plugged the holes. They haven’t fixed the structural problems.

JUAN GONZÁLEZ: And, Curt Guyette—Curt, we have just about a minute, but I just wanted to ask you, in terms of the cities that Governor Snyder has chosen to institute these emergency managers, what’s the racial composition of a lot of these cities?

CURT GUYETTE: With the exception of one, they are all majority African-American. And they’re also all very poor cities. So this is a racial issue, and it’s a class issue.

DR. MONA HANNA-ATTISHA: Well, I’m not an expert on Legionnaires’, but the water chemistry was a perfect setup for this to happen. The corrosive water that was untreated with corrosion control not only leached lead, but it also leached iron from the pipes. And iron eats up the chlorine, which you need to kill your bacteria. And then the iron also served as a nutrient or food for bacteria to overgrow. So it was a perfect setup for outbreaks like this.

AMY GOODMAN: I want to thank you both for being with us. Of course, we’ll continue to follow this story. Dr. Mona Hanna-Attisha of Hurley Children’s Hospital, and Curt Guyette, an investigative journalist with the ACLU of Michigan, thanks so much for joining us.

We have job openings at Democracy Now!: director of finance and operations as well as a development director. Go to democracynow.org. 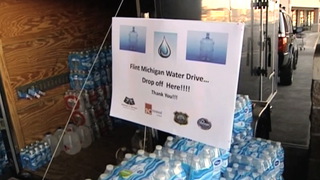