“All the President’s Misogynists”: Jodi Jacobson on Why It Took So Long to Derail the Trump Train

Republican presidential nominee Donald Trump’s campaign is facing increasing turmoil as House Speaker Paul Ryan told fellow Republican lawmakers Monday he would no longer campaign for Trump following the release of the 2005 videotape showing Trump boasting about sexually assaulting women. The announcement by Paul Ryan comes as a growing number of Republican officials have called on Trump to step down as their party’s nominee following the release of the video. Fifteen Republican senators, including former GOP presidential nominee John McCain, are now openly opposing Trump’s candidacy. We speak to Jodi Jacobson, president and editor-in-chief of Rewire. Her latest article is titled “All the President’s Misogynists: Why It Took So Long to Derail the Trump Train.”

Web ExclusiveOct 10, 2016Soraya Chemaly: Trump Tape May Be Shocking, But So is Broader GOP Agenda Toward Women

DONALD TRUMP: I’ve got to use some Tic Tacs just in case I start kissing her. You know, I’m automatically attracted to beautiful—I just start kissing them. It’s like a magnet. I just kiss. I don’t even wait. And when you’re a star, they let you do it. You can do anything.

BILLY BUSH: Whatever you want.

DONALD TRUMP: Grab ’em by the pussy. You can do anything.

AMY GOODMAN: The video was recorded by NBC’s Access Hollywood in 2005 and released Friday by The Washington Post. The announcement by House Speaker Ryan comes as a growing number of Republican officials have called on Trump to step down as their party’s nominee following Friday’s release of the video. Fifteen Republican senators, including former Republican presidential nominee John McCain, are now openly opposing Trump’s candidacy; scores more congressmembers are.

For more on the fallout from these revelations, we’re joined by Jodi Jacobson, president and editor-in-chief of Rewire. Her latest article is headlined “All the President’s Misogynists: Why It Took So Long to Derail the Trump Train.”

AMY GOODMAN: Why don’t you respond to this increasing number of Republicans who are pulling their support from Trump, not to be confused with House Speaker Ryan, who did not unendorse Trump, but said he won’t campaign for him?

JODI JACOBSON: Well, I think it’s a few things. You know, one, this came on the heels of a really bad first debate performance by Trump. And secondly, he transgressed a line by making it clear that he felt impunity at sexually assaulting white women, and particularly white married women, because if you look at the whole spectrum of Trump’s comments throughout the entire campaign, he has been assaulting verbally immigrants, refugees, women generally, and no one thought at the time, “Gee, what about, you know, the daughters, wives and sisters of Mexican immigrants, who might be feeling ashamed for being called—having their, you know, parents called rapists or criminals or what have you?” So now we’re hearing a lot from the Senate Republicans and House Republicans about how hurtful this was to them, because they can’t imagine their wives, daughters and mothers being subject to this kind of thing. I think it’s a little bit too little, too late, but it’s not surprising to me that suddenly they would take this turn of events and start to abandon ship.

AMY GOODMAN: The highest-ranking Republican woman in Congress condemned Trump’s comments. This is Washington state Congressmember Cathy McMorris Rodgers, who said, quote, “It is never appropriate to condone unwanted sexual advances or violence against women. Mr. Trump must realize that it has no place in public or private conversations.” She framed it as sexual violence, Jodi.

JODI JACOBSON: Well, it is sexual violence and assault. You have a lot of, you know, GOP representatives now, both senators and congressmen, trying to deflect from whether or not grabbing women against their will is assault. There have been several who have sort of, you know, waffled on whether they would call it “assault.” “I don’t know if it is.” Suddenly, “I’m not a lawyer. I can’t tell.” You know, it’s—whenever it’s convenient for the GOP to deflect or deny something, they suddenly become unexpert at those things, and they can’t circulate anything. So, you know, this is—

AMY GOODMAN: You also have—you also have, as early as just—as late as Thursday, Donald Trump once again saying that the Central Park Five, five young men who were sentenced up to 13 years and served that time in prison for what’s known as the Central Park jogger case, a jogger who was raped and left almost for dead in Central Park—these men who served all this time in prison, who Donald Trump took out full-page ads in The New York Times and other publications to have them executed, were then exonerated. The person who did the crime admitted it, who had nothing to do with them. And the City of New York settled for $41 million with these five young men, who lost so many years in prison. Yet just last Thursday, he continued to say they were guilty. Jodi?

JODI JACOBSON: Well, exactly. You know, Donald Trump is clearly interested in making everyone else a predator but himself, but he’s clearly a predator. And he’s also incredibly grotesque in his historical references to his daughter’s body, to, you know, putting his daughter’s body out for view, commenting on his daughter’s body. This one tape is really just a slice of what’s out there that we already know. And it’s clear from what I’ve heard from people inside the production companies of his shows that there’s lots more tape to be had, if one could get their hands on it. And I know people are looking into that now.

So, you know, I think this is a man who has acted with impunity for a very long time, who has not been held to account. He wasn’t held to account by the press earlier. And now he’s grown into this full-fledged monster, and the GOP created that monster by allowing this kind of rhetoric and this kind of assault on values and on rights, basic human values and basic human rights, to go on throughout the campaign.

AMY GOODMAN: We have to leave it there. Jodi Jacobson—

JODI JACOBSON: So, they really have no one to—

AMY GOODMAN: We have to leave it there. We will link to your piece at Rewire.

Soraya Chemaly: Trump Tape May Be Shocking, But So is Broader GOP Agenda Toward Women 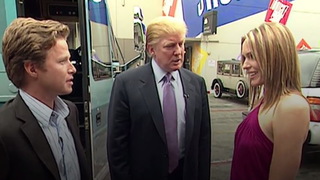 Soraya Chemaly: Trump Tape May Be Shocking, But So is Broader GOP Agenda Toward Women