On Saturday in North Dakota, security guards working for the Dakota Access pipeline company attacked Native Americans with dogs and pepper spray as they resisted the $3.8 billion pipeline’s construction on a tribal burial site. On Sunday, more than 500 people marched back to the construction site and held a prayer, mourning the destruction of their ancestors’ graves. Now, later today, a federal judge in Washington, D.C., will decide whether to grant a temporary restraining order to halt temporarily further construction of the Dakota Access pipeline in the area near the Standing Rock Sioux Reservation. For more on the standoff at Standing Rock, we’re joined by Dave Archambault, chairman of the Standing Rock Sioux Tribe.

AMY GOODMAN: This is Democracy Now!, democracynow.org, The War and Peace Report. I’m Amy Goodman, as we continue our coverage of the standoff at Standing Rock, which we have just returned from. On September 3rd, the Dakota Access pipeline company attacked Native Americans with dogs and pepper spray as they resisted the construction of the $3.8 billion pipeline on a sacred tribal burial site. On Saturday, Native Americans were shocked when they went to plant their tribal flags at the construction site and found the bulldozers working over the weekend. On Friday, lawyers for the tribe had filed documents showing how this land was a tribal burial site. Now many fear that many of the graves and artifacts are destroyed. Well, today, a federal judge in Washington, D.C., will decide whether to grant a temporary restraining order prohibiting further construction of the Dakota Access pipeline in the area near the Standing Rock Sioux Reservation, until this same judge rules on an injunction in the tribe’s lawsuit against the U.S. government, which is expected by Friday.

We welcome you both to Democracy Now! Chairman Archambault, we just came back from North Dakota. Having filmed what took place on Saturday, which shocked everyone, the dogs and the pepper spray unleashed on Native Americans who were protesting, or, as you say, protecting the area that the Dakota Access pipeline is being constructed on. Can you respond to what took place?

DAVE ARCHAMBAULT II: Thank you, Amy, for being out there and capturing all the footage. There’s always two sides to the story. And law officials try to portray that they were attacked by an angry mob and it was a riot scene. But it—that was not what was taking place. We had protectors who were concerned about the land. And it just goes to show what kind of a company Energy [Transfer] Partners is. They have—they have zero policies on community relations, zero policy on human rights, zero policies on Indian rights, indigenous rights. So, when a company is like that, they have no social responsibility, and they don’t care about anything. And they hire security companies with untrained handlers. And these handlers—the dogs were attacking the handlers. That’s why they released dogs into the crowd. And then they go and try to recover them. It just doesn’t make sense, and it’s not right, what this company, Energy [Transfer] Partners, is doing. They say they have every right to be there, but so do we.

AMY GOODMAN: On Monday, a Dakota Access spokesperson issued this statement, saying, “We are greatly saddened and extremely bothered to confirm that unwarranted violence occurred on private property under easement to Dakota Access Pipeline resulting in injury to multiple members of our security personnel and several dogs. It is unfortunate that what has been portrayed as a peaceful protest by the opponents of the pipeline has now turned to violence and intimidation by a group of criminals and activists. Assailants broke through a fence and attacked our workers. We are working with law enforcement to ensure that all offenders are arrested and prosecuted to the fullest extent of the law.” Chairman Archambault, can you respond to what they said? The county sheriff repeated this, though what was shocking also is that the local law enforcement were not there over this whole period, so they simply repeated what the company said.

DAVE ARCHAMBAULT II: Yeah, the company provoked this whole thing. And law enforcement, from what I understand, they observed everything. And it wasn’t until the company came forward and assaulted one of the protectors, when the protectors crossed over the boundary. But there’s a question there. Like, we always said we have a right to our treaty lands, and we have a say. The company, the U.S. government, the state government never got permission from us to be on that land, to do this to our lands.

AMY GOODMAN: When you say “protector,” can you explain, using this term “protector” rather than “protester”?

DAVE ARCHAMBAULT II: Well, protester is somebody that is standing there waiting for confrontation. A protector is going to do what it takes on the ground to make sure that nothing negative happens to our indigenous rights and our indigenous lands.

AMY GOODMAN: I mean, the use of dogs. You’re the chairman of the Standing Rock Sioux Tribe. Have the state authorities or the county authorities explained to you how it was that the company security unleashed these dogs, both on leash and unleashed them, on the protesters, biting a number of them? As people could see in the report we just played, you had a dog there whose mouth and nose were dripping with blood, as the security guard who was holding that dog, even when I pointed this out to her, and others certainly did, moved on to attack other members of this protest. What has the county authorities said to you about this? They have to answer to you.

DAVE ARCHAMBAULT II: First thing I did was I asked the law enforcement, where did this company get these dogs? Was this something that law enforcement supplied? When I asked the question, they said, no, they had nothing to do with it. The company hired somewhere—someone to get these dogs, and there was a lack of training on how to handle the dogs. They were using the dogs as a deadly weapon. And that’s something that needs to be looked into, is who was handling these dogs, and whose dogs were they, and why were they—why were they being used? This was all premeditated. They knew something was going to happen when they leapfrogged over 15 miles of undisturbed land to destroy our sacred sites. They knew that something was going to happen, so they were prepared. They hired a company that had guard dogs, and then they came in, and then they waited. And it was—by the time we saw what was going on, it was too late. Everything was destroyed. The fact is that they desecrated our ancestral gravesites. They just destroyed prayer sites. And it’s disturbing. And that’s why we’re filing for the temporary restraining order. They need to stop working. This company needs to go away. Energy [Transfer] Partners is a bad company.

AMY GOODMAN: Energy Transfer Partners is working for the Dakota Access pipeline, to build it. 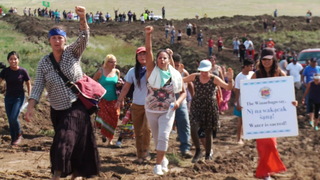