Trump Must Stop His Attacks on the Press President Donald Trump’s daily fusillades against journalists and the news media are vile and reprehensible. Trump never misses a chance to assail the press at news conferences, White House “press sprays” under the roar of the presidential helicopter, and especially at his campaign rallies. Last week, at a three-day conference of Trump supporters held at his National Doral golf resort in Miami (where, incidentally, Trump is angling to host, and thus personally profit from, next year’s G-7 meeting), a video was shown depicting Trump storming through a “Church of Fake News,” slaughtering parishioners whose heads were replaced with news organization logos or the faces of political opponents. Reports of the violent video sparked outrage. But the time for surprise over Trump’s demonization of the press is long past. He is fueling hatred and encouraging violence, and needs to be held accountable.

According to the U.S. Press Freedom Tracker, journalists have faced over 100 separate incidents of press freedom violations so far this year, from arbitrary arrests while covering protests, to denial of access to immigrant detention centers or important public hearings. Fortunately, there have not been any deaths among U.S.-based journalists this year. But journalists around the world have faced injury and death in the course of their work.

Soon after an Oct. 6 phone call between Trump and Turkish President Recep Tayyip Erdogan, Trump made the surprise announcement ordering U.S. troops to withdraw from Kurdish-controlled northern Syria. Shortly thereafter, Turkey invaded. At a news conference Wednesday, Trump boasted that no U.S. soldiers had been harmed, calling the situation “nice.” Yet among other attacks, a Turkish airstrike on a civilian caravan in northern Syria Sunday killed 15 people, including two Syrian Kurdish journalists, Mohammed Hussein Rasho, a reporter for Cira TV, and journalist Saad Ahmed of Hawar News.

Last week marked the first anniversary of the brutal murder of Jamal Khashoggi inside the Saudi Arabian Consulate in Istanbul, reportedly killed on the orders of Saudi Crown Prince Mohammed bin Salman. Khashoggi wrote critically of the Saudi dictator, and was lured into the consulate to obtain documents for his forthcoming marriage. There, he allegedly was tortured, suffocated to death, then dismembered by a team of a dozen Saudi operatives. The CIA traced the orders to bin Salman. Despite this, Trump still supports the crown prince, even vetoing congressional condemnations of Khashoggi’s killing and restrictions on arms sales to Saudi Arabia, which also enables the kingdom’s ongoing bombing of Yemen.

Journalism, even outside of war zones, is still a dangerous profession. This week marks the second anniversary of the assassination of independent journalist Daphne Caruana Galizia in the Mediterranean island nation of Malta. She had been doggedly reporting on corruption at the highest levels of Maltese government. As the Committee to Protect Journalists wrote on the anniversary of her death, Oct. 16, “Three men are currently in detention in relation to the killing … however the perpetrators, including the masterminds, have yet to be brought to justice.”

A consortium of press organizations has taken a novel approach to ensure that the work of murdered or otherwise silenced colleagues continues. Forbidden Stories is a network of journalists who have committed to pursuing these stories: “Even if you succeed in stopping a single messenger,” their website promises, “dozens will take their place and deliver the message.” Forbidden Voices coordinated the Daphne Project, with 45 journalists pursuing Galizia’s unfinished stories and investigating her assassination, with important, ongoing results.

“Green Blood” is Forbidden Stories’ project on murdered and censored environmental journalists. With depth and rigor, this must-read reporting honors these journalists, providing a model for how members of the press can stand together in the face of serious threats.

Their first reports covered three cases where violence and intimidation have been used to silence a free press: the murder of Indian journalist Jagendra Singh for his work on organized crime, related to India’s powerful “sand mafias” that illegally extract and sell sand; the suppression of reporting on the massive, heavily polluting North Mara gold mine in Tanzania; and indigenous resistance to a nickel mine in Guatemala. There, reporter Carlos Choc has fought criminal charges for over two years stemming from his reporting, fleeing to El Salvador at one point to avoid arrest. While the court case drags on, Choc is prevented from reporting.

A free press is vital to a democratic society, which is why it is enshrined in the U.S. Constitution. Donald Trump encourages violence against journalists with his constant vitriol. Condemnation of his behavior, of his words, must be vigorous, bipartisan and unrelenting. 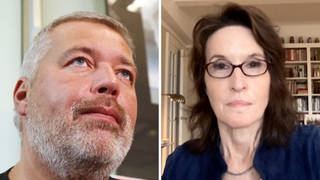