In New York, housing rights advocates are celebrating after state lawmakers announced an agreement that would provide the strongest tenant protections in over a quarter of a century. The deal came just days ahead of the expiration of the current rent laws at the end of this week. Democracy Now! co-host Juan González explains how lawmakers agreed to abolish laws allowing landlords to deregulate rents on apartments after they exceed a certain limit, and to curb provisions allowing landlords to raise the rent of rent-controlled apartments after renovations. The law is one of several similar efforts nationwide and is expected to give municipalities around the state more authority to regulate rents and ensure greater access to affordable housing.

AMY GOODMAN: Juan, before we move on with our first story, Albany reaching deal to toughen rent protection, talk about the significance of this.

JUAN GONZÁLEZ: This is—yeah, this is a huge victory, Amy. It was back in the mid-1990s when George Pataki, the Republican governor of New York, was in office, and there was an extreme conservative Republican Senate and an Assembly in New York that was Democratic but really controlled by the landlord lobby. And they really initiated this vacancy decontrol that resulted in about 200,000 rent-regulated units in New York City being decontrolled. “Decontrolled” means the landlords can charge whatever they want.

And so, what happened, finally, this year, and just in Albany, is this extension, a sweeping extension, of the rent regulations, that will now eliminate vacancy decontrol, that will also prevent landlords—it used to be that an apartment, when it became vacant, the landlord could automatically increase the rent by 20%. That is no longer going to be allowed, and that they cannot jack up major capital improvement prices and then charge the tenants for those improvements. So, a lot of that has been eliminated.

AMY GOODMAN: And what do you think this will mean for the country, for places like San Francisco?

JUAN GONZÁLEZ: Well, it’s already happening in Newark and in several other places in California. Increasingly, rent—because housing for renters has become so exorbitant, more and more local governments are saying, “We’ve got to regulate rent.” So this is just another huge push in the movement to protect tenants across the country.

AMY GOODMAN: And, of course, we’ll continue to follow this. 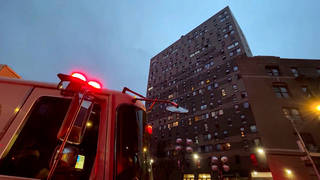 As Officials Blame Tenants After 17 Die in Bronx Fire, Activists Say Greed & Neglect Are to Blame