Democratic Senator Raphael Warnock of Georgia implored conservative members of his party to stop obstructing voting rights legislation in a powerful speech on the floor of the Senate Tuesday. While Warnock did not name Senators Joe Manchin and Kyrsten Sinema, the two have come out against doing away with the filibuster in order to allow Democrats to pass the Freedom to Vote Act and the John Lewis Voting Rights Advancement Act. Warnock said there was no chance of Republicans joining the effort to safeguard democracy and that only a change to the filibuster could secure passage of the bills. “Who is being asked to foot the bill for this bipartisanship? And is liberty itself the cost?” Warnock said.

AMY GOODMAN: This is Democracy Now! I’m Amy Goodman, as we end today’s show with Democratic Senator Raphael Warnock’s powerful speech from the floor of the Senate Tuesday as he called on the conservative members of the Democratic Party to stop obstructing voting rights legislation. He didn’t name Senators Joe Manchin and Sinema, who have come out against doing away with the filibuster in order to allow Democrats to pass the Freedom to Vote Act and the John Lewis Voting Rights Advancement Act.

SEN. RAPHAEL WARNOCK: “Conniving methods that were getting in the way of the free exercise of the constitutional right to vote,” his rallying cry that day, in 1957, was “Give us the ballot.” So, Madam President, in light of the conniving methods of voter suppression we have seen enacted into law since the January 6th attack on the Capitol, I come to the floor today to share with the people of Georgia and the American people the message that I shared with my colleagues over the weekend and earlier today during our caucus meeting.

I said to my Democratic colleagues over the last several days, number one, unfortunately, the vast majority of our Republican friends have made it clear that they have no intention of trying to work with us to address voter suppression or to protect voting rights. They have embodied by their actions the sentiments of conservative strategist Paul Weyrich, who dared say in 1981, quote, “I don’t want everybody to vote.” That’s what he said. “Elections are not won by a majority of people. They never have been from the beginning of our country, and they are not now. As a matter of fact,” he went on to say, “our leverage in the elections, quite candidly, goes up as the voting populace goes down.”

Second thing I said to my Democratic colleagues today is that while we cannot let our Republican friends off the hook for not being equitable governing partners, if we are serious about protecting the right to vote that’s under assault right now, here is the truth: It will fall to Democrats to do it. And if Democrats alone must raise the debt ceiling, then Democrats alone must raise and repair the ceiling of our democracy. How do we in good conscience justify doing one and not the other?

And so I struggled this weekend. I talked to folk I believe in. Among them, I spoke with Reverend Ambassador Andrew Young, who was with Dr. King until the very end, about this vote. I talked to Ambassador Young, and I asked him, “What do you think?” And he said, “I try not to worry, but I’m worried about our country.” And then this 89-year-old battle-worn soldier in the nonviolent army of the Lord drew silent on the phone. And then he said to me, “Tell your colleagues that among your constituents are people who literally laid their lives on the line for the basic right to vote. They lost friends. They lost so much.”

And so, this is a real moral quandary for me, and it makes it difficult for me to cast this vote today. But after many conversations, with colleagues, with Georgians, with experts who know the economy, with voting rights advocates and civil rights leaders, I will indeed vote today with anguish. I will vote to raise the debt ceiling. I’m voting yes because I’m thinking about the kids in the Kayton Homes housing projects where I grew up in Savannah, Georgia. I’m thinking about the hardworking families pushing to recover from the pressures of this pandemic, those who are on the margins and those who are least resilient, for whom a collapse of the economy would be catastrophic. And ironically, many of these are the same people who are also being targeted by the voter suppression efforts I mentioned earlier. I’m thinking of them and the people of Georgia as I cast my vote today to raise the debt ceiling.

But I’m also thinking about what we need to do to keep our democracy and our economy strong today and for the next generation. Once we handle the debt ceiling, the Senate needs to make voting rights the very next issue we take up. We must do voting rights, and we must deal with this issue now.

So let me be clear: I’m so proud of what we did with the bipartisan infrastructure bill and the major economic investments we’re putting finishing touches on that will close the Medicaid coverage gap and deliver historic relief to Georgia farmers and expand broadband access and so much more. But, Madam President —

AMY GOODMAN: That’s Democratic Georgia Senator Raphael Warnock’s excerpt of a powerful speech from the floor of the Senate Tuesday as he called on conservative members of his own party to stop obstructing voting rights legislation. Reverend Warnock is also pastor of the Ebenezer Baptist Church in Atlanta, which was the spiritual home of Dr. Martin Luther King and his father.

And that does it for our show. Democracy Now! is produced with Renée Feltz, Mike Burke, Deena Guzder, Messiah Rhodes, Nermeen Shaikh, María Taracena, Tami Woronoff, Charina Nadura, Sam Alcoff, Tey-Marie Astudillo, John Hamilton, Robby Karran, Hany Massoud and Mary Conlon. Our general manager is Julie Crosby. Special thanks to Becca Staley, Paul Powell, Mike Di Filippo, Miguel Nogueira, Hugh Gran, Denis Moynihan, David Prude and Dennis McCormick. You can go to democracynow.org for all of our shows, and also check us out on Instagram, on Facebook, on Twitter. I’m Amy Goodman. Remember, wearing a mask is an act of love. 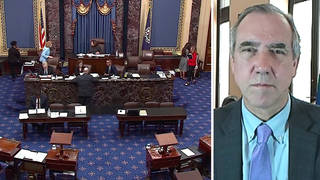