As Al Qaeda and the Taliban Head to Guantanamo, Cuba, a Look Back at What They’ll Be Facingin Detention Camps From the Experience of Haitian Refugees

As the search for Osama bin Laden and Mullah Omar intensifies in Afghanistan, so have US efforts to capture andquestion suspected Taliban and al Qaeda fighters. Over the last two days alone, at least 30 new prisoners have beenbrought to detention centers in Afghanistan, where they are being probed for information on the whereabouts of themissing leaders. These additions bring the total number of prisoners held by the United States up to 180, with moreexpected to follow as the hunt for Omar and bin Laden continues.

At present, the prisoners are being held in a variety of makeshift detention centers in Afghanistan. According toWar Secretary Donald Rumsfeld, however, they will soon be sent to more permanent facilities at the U.S. Navy base atGuantanamo Bay, Cuba. There they will undergo further interrogation by the FBI and CIA and await trial, possibly bymilitary tribunal. As of last week, the government was saying that it has no plans to use Guantanamo for thesetribunals.

The U.S. base at Guantanamo has a controversial history, and this will not be the first time that it has been used asa detention center. From late 1991 until June 1993, 267 HIV-positive Haitian refugees were held at the base afterfleeing political violence in their country.

The original content of this program is licensed under a Creative Commons Attribution-Noncommercial-No Derivative Works 3.0 United States License. Please attribute legal copies of this work to democracynow.org. Some of the work(s) that this program incorporates, however, may be separately licensed. For further information or additional permissions, contact us.
NEXTNancy Murray: Hyper-Nationalism and Our Civil Liberties 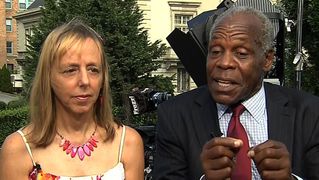 Danny Glover and Medea Benjamin on Assata, Guantánamo and Trade as Cuban Flag Rises in Washington