At a speaking event in New York City this week, award-winning journalist and author Naomi Klein discussed why the reconstruction from Superstorm Sandy is actually a great place to usher in progressive change. Klein’s latest article for The Nation magazine is called, “Superstorm Sandy — a People’s Shock?” She is the author of the best-selling book, “The Shock Doctrine: The Rise of Disaster Capitalism,” and is now working on a book about climate change. [includes rush transcript]

AMY GOODMAN: We turn now to award-winning journalist and author Naomi Klein on global warming and the response to Superstorm Sandy. Her book, The Shock Doctrine: The Rise of Disaster Capitalism, was a New York Times best-seller. She is now working on a book about climate change. In her latest piece for The Nation magazine called “Superstorm Sandy—A People’s Shock?” she writes, quote, “The prize for shameless disaster capitalism surely goes to right-wing economist Russell S. Sobel, writing in a New York Times online forum. Sobel suggested that, in hard-hit areas, FEMA should create 'free trade zones—in which all normal regulations, licensing and taxes [are] suspended.' [unquote] This corporate free-for-all would, apparently, 'better provide the goods and services victims need,'” he wrote.

Klein elaborated Tuesday night when she spoke at the 92YTribeca. This was her response when an audience member asked about her argument that the reconstruction from Sandy is actually a great place to usher in progressive change.

NAOMI KLEIN: I wouldn’t call it “disaster socialism.” In the piece you’re referring to, I called it “a people’s shock,” as opposed to “the shock doctrine.” And the truth is, what I argue in the book, what I argue in The Shock Doctrine, is that this whole strategy was developed by the right in response to the fact that crises are—economic crises and also ecological crises, in fact, are traditionally opportunities for the left. And if we think of neoliberalism as a counterrevolution against the New Deal and an attempt to unmake the gains that were made by popular movements in the wake, in the aftermath of the Crash of 1929, then I think we should also see the shock doctrine as the right’s strategy to make sure that crises go their way during disasters, as opposed to in a direction that they often go more organically, which is towards getting at the root cause of the crisis and developing popular movements that demand real structural change.

The problems that I call out in the book are not responding strongly to disaster. There’s nothing wrong with that. If you’re having a crisis, you should respond strongly. It deserves that. It’s these particular ways of using crisis in anti-democratic ways, to hoard power, to centralize power, to circumvent democracy. So what I’m calling for is the opposite of that, is, in moments of crisis, to broaden the democratic space.

And I think thinking about how a community responds after a disaster like Sandy, it’s a great example, because often what you have are very elite-driven reconstruction processes. You know, a committee is struck, filled with industrialists—this has just happened—to come up with a reconstruction plan, often very, very wealthy people who are supposed to attract more donors. And often the affected people are treated as so traumatized and so victimized that they of course could not participate in the reconstruction process themselves. And this is simply not true. In fact, the best way to recover from a trauma is to overcome your helplessness by participating, by helping. And that’s what you see in the extraordinary Occupy Sandy response to this particular crisis, where it comes in a spirit not of the traditional relief organization that just comes into a community, says, “We know what you want,” and hands out whatever people decide that they want, and it’s a very much of a client relationship. The volunteers involved in Occupy Sandy are coming in in the spirit of what they call “mutual aid,” which is saying—asking people, “What do you want?” you know, and trying to empower communities, not only to respond to the immediate emergency, but also the recovery afterwards.

But so, what would some of that look like, right? It’s amazing to me that here we have a crisis which was supposed to be a wake-up call about climate change—and it was a wake-up call for a little while. You know, you had the Bloomberg cover, “It’s Global Warming, Stupid.” You had Bloomberg endorsing Obama because of his supposed stand on climate change. But yet, when we think about reconstruction, we’re talking about, you know, how to hold back the next storm, not how to prevent the storms from continuing to escalate. And in the midst of all of this, what is happening in the city but a serious discussion about raising transit rates, raising fares on the subways and the public bus system? What should be happening in response to that—talk about confidence and the confidence that we should be gaining from finding out that we were right—is saying, not only do you not want fare increases, but public transit in a moment like this should be free. We should be developing policy that is designed to encourage the maximum number of people not to use cars and to use public transit, right? That’s just one example of what, in my view, a people’s shock would look like. And that involves mobilizing communities. It involves organizing the people in public housing, who still don’t have their lights on, to be a political force, you know?

And one of the things I was really struck by when I was in Red Hook yesterday is that people are talking about climate change there. You know, often, people who are really on the front lines, there’s this assumption that, oh, they’re too focused on the daily emergency to care about these big-picture issues. People were bringing up climate change unsolicited with me again and again and again, and saying things like “We don’t just want the lights on. Wouldn’t it be kind of nice if we had solar power, so that we didn’t have storms, you know, threatening us next year and the year after and the year after?” And the truth about climate change is that we’re locked into a certain amount of climate change in the years to come, but we absolutely have a very small window to try to avoid catastrophic climate change. And we’ve gotten a taste of what we’re looking for, and it’s pretty—looking forward to, and it’s pretty scary.

So, that’s kind—that’s more what I mean. It’s really about mobilizing the people who were most affected to be a political constituency. And I think this ties into the question about, other than trade unions, what are other—what are other possible organizing bases? We have to organize neighborhoods. We have to organize—you know, we have to organize people around housing issues, around debt issues, or, you know, organize transit users and these other constituencies, because the traditional workforce, the large-scale workforce that gave birth to the labor movement, you know, is not as present in our economy as it used to be, which is not to not say labor unions are irrelevant. They’re not irrelevant, but they can’t be the only body that organizes mass numbers of people, the only institution.

AMY GOODMAN: Naomi Klein, speaking earlier this week at the 92YTribeca in New York. She’s the author of The Shock Doctrine: The Rise of Disaster Capitalism. Her latest piece in The Nation magazine called “Superstorm Sandy—A People’s Shock?” She is speaking Friday night at the Hammerstein Ballroom in New York as part of 350.org’s “Do the Math” tour with Bill McKibben. Naomi Klein is writing a book on climate change.

This is Democracy Now!, democracynow.org, The War and Peace Report. When we come back, Chasing Ice. Stay with us.

“Chasing Ice”: New Film Captures Melting of the Planet Through the Lens of Photographer James Balog

NEXT“Chasing Ice”: New Film Captures Melting of the Planet Through the Lens of Photographer James Balog 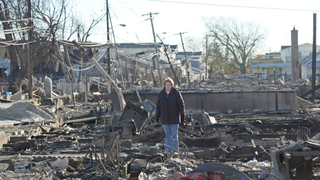