In another “Super Tuesday” vote, some two dozen towns in Vermont called on Congress to push a constitutional amendment to overturn the U.S. Supreme Court’s Citizens United v. FEC ruling and address the issue of corporate personhood. Vermont could become the third state, after Hawaii and New Mexico, to endorse similar proposals. Independent Sen. Bernie Sanders of Vermont has proposed a related amendment and has been an outspoken supporter of the measure passed Tuesday. “I suspect that you will hear [Sen. Sanders] today and in coming days really taking the message from the towns across Vermont to the Capitol and saying something has to be done about a Supreme Court ruling that has essentially opened the door to corporate cash buying elections,” says John Nichols, Washington correspondent for The Nation. [includes rush transcript]

JOHN NICHOLS: The best thing possible: grassroots citizens gave their response to the incredibly absurd money and politics situation we’re in. Dozens of towns across Vermont voted for a resolution urging their legislators at home in Vermont and their members of Congress to push a constitutional amendment to overturn the Citizens United Supreme Court ruling and to address the issue of corporate personhood. I think by the end of the day today we’ll probably have close to 50 towns across Vermont—the broadest grassroots uprising yet against the Citizens United ruling and really the grotesque diminishing of our politics by corporate money, CEO money, that so dominates the presidential race that we’re looking at on the Republican side right now.

AMY GOODMAN: And so, they’re calling exactly for what?

JOHN NICHOLS: They’re calling for a constitutional amendment that would say that corporations are not people. It’s a variation on a number of amendments that have been put up. Senator Bernie Sanders has a pretty strong amendment up right now. And there’s been a lot of parallel between what’s going on at the grassroots in Vermont and Senator Sanders’s advocacy in the Senate. In fact, Senator Sanders was an outspoken supporter of this town meeting uprising, and I suspect that you will hear him today and in coming days really taking the message from the towns across Vermont to the Capitol and saying something has to be done about a Supreme Court ruling that has essentially opened the door to corporate cash buying elections.

AMY GOODMAN: John, I want to thank you for being with us. John Nichols, political writer for The Nation magazine, author of Uprising: How Wisconsin Renewed the Politics of Protest, from Madison to Occupy Wall Street.

This is Democracy Now!, democracynow.org, The War and Peace Report. When we come back, we’re going to be looking at the arrest of one of the leaders, if you could call him a leader, of Anonymous. But first, we’ll be remembering New Jersey Congress Member Don Payne, the only African-American Congress member in New Jersey’s history. He died on Tuesday. Stay with us. 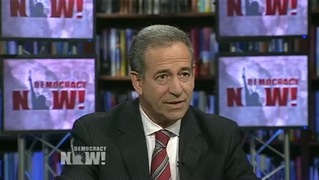