The civil rights lawsuits filed by the families of Samuel Cruz and Mohamed Bah, both murdered by police after family members called 911 for medical assistance, include a call to train police how to handle crisis intervention and how to respond to calls for help with people who are emotionally disturbed. Unlike the 2,500 communities in over 40 states, New York City and New Rochelle police do not have crisis intervention teams designed by mental health professionals. Many of these so-called CITs are based on what has become known as the “Memphis Model,” a policy developed there after an officer killed a mentally ill person in 1987. We’re joined by Sam Cochran, retired police officer who served as the coordinator of the Memphis Police Department’s Crisis Intervention Team for 20 years, from 1988 to 2008. He is now project coordinator with the University of Memphis’s CIT Center, where he is nationally known for his work.

AMY GOODMAN: This is Democracy Now!, democracynow.org, The War and Peace Report. I’m Amy Goodman. The civil rights lawsuits filed by the families of Samuel Cruz and Mohamed Bah include a call to train police how to respond to calls to help with people who are emotionally disturbed. Unlike more than 2,000 communities in over 40 states, NYPD and New Rochelle police do not have crisis intervention teams designed by mental health professionals. Many of the these so-called CITs are based on what’s become known as the “Memphis Model,” a policy developed there after an officer killed a mentally ill person in 1987.

For more, we’re joined by Sam Cochran, a retired police officer who served as the coordinator of the Memphis Police Department’s Crisis Intervention Team 20 years, from 1988 to 2008. He’s now project coordinator with the University of Memphis’s CIT Center, where he’s nationally known for his work.

Welcome to Democracy Now! You’ve heard these stories, Sam Cochran, of family members calling police to get their loved ones to a hospital or to get them help, and the police shooting their—coming to the scene and shooting the people dead. Can you talk about your response and what Memphis has done?

SAM COCHRAN: Well, first of all, that’s—stories like this is happening across the United States of America. All we have to do is search newspaper articles, and you’ll read events similar to this throughout. And communities are looking, very intensely, how can we might do things better?

In Memphis, years ago, in fact, 1987, our officers responded to a call that came in through our 911 system. It was reported to our dispatcher that the individual had a mental illness, 27 years old. He was armed with a very large knife. He was cutting himself. He was threatening family members. He was also threatening neighbors that were also arriving on the scene. And they needed help. Our officers arrived. After a very brief encounter with this individual, he was shot multiple times and died as a result.

And what came out of that, months of study and planning, was what is referred to as the Crisis Intervention Team program. Now, many times people think, “Well, that’s just a law enforcement program.” No, the team actually stands for a community program. CIT is what we refer to it, a crisis intervention team, is not a law enforcement program, it’s a community program. And the community program that I’m suggesting to you is that of partnerships. There’s three main partnerships: law enforcement, of course, local mental health services providers and also advocacy. And our advocacy within the United States of America, clearly NAMI is the champion advocacy of this program, but also Mental Health of America has joined in. So, other advocacies, other partnerships can be added, but that’s the—that’s the foundation of this program.

And it’s a program that reaches out through not only community services, but training to our law enforcement officers to be a first responder. We want a specialist on that particular scene. So we’re not talking about an entire team of specialists; we’re only talking about one particular officer that arrives on the scene and is to be leader of that particular scene, and other officers are there to support the officer with regards to the needs of the crisis.

So, it’s been very successful for us for over—for 25 years now. We have programs throughout the United States, estimated at around 2,800 CIT programs throughout 45 states. We also have programs in Canada and Australia, and fixing to have a program in Sweden that we just found out about. So, it’s been very, very encouraging. It’s been uplifting from the fact that the community supports the program, but also the officers have confidence. And that’s real critical.

There are some common threads that I was hearing within the—both calls or both the ladies that were articulating the facts. The presence of fear was throughout both crisis events. In our training, we address specifically a role of the CIT officers to address fear. It’s very, very critical. And the fear that can be present is fear of the family members that may be present, fear of neighbors that could be present, fear of the consumer or the person who has a mental illness, and also fear of the officers. And those things need to be addressed in order to slow things down, in order to develop a plan, in order to be able to assess and reassess and maybe even change a plan, if necessary.

AMY GOODMAN: Just last week, in Dallas, Texas, a police officer shot a mentally ill man standing outside his own home in broad daylight. The man’s mother had called police for help. Police originally claimed the man, Bobby Bennett, had lunged at officers with a knife, but a neighbor’s security video told a different story. The disturbing video shows Bennett sitting in an office chair in the street. As the police approach, Bennett wheels back in the chair and stands up, hands at his side. He was then repeatedly shot by a police officer. Bennett did survive but remains hospitalized. Police originally charged Bennett with aggravated assault but dropped the charge after the video came to light. Randall McLaughlin, the Memphis Model and how this fits into the case of Samuel Cruz—you’re bringing a lawsuit today on his behalf and his wife Elsa—and in the case of Mohamed Bah? They say in both cases they had knives.

RANDOLPH McLAUGHLIN: We think that the Memphis Model is the superior approach and the best practice in terms of handling these issues. It’s eerily similar, in each of the cases that we’re involved with—Mayo and myself, Debra Cohen and Franciscus Diaba—the police say the exact same thing in Chamberlain, in Bah and in Cruz: “He came at us with a knife, and we killed him.” Well, the question really becomes, as Sergeant Cochran said—and I believe he was a sergeant at the time: What was their plan? Did they have a plan when they broke in the door? Why did they break in the door? Why didn’t they slow things down? Why did they aggravate the situation? In fact, the officers in all of these cases have not been trained in crisis intervention. They’ve been trained in the use of force—deadly force. And if that’s all the officer has at his disposal, he will use it.

AMY GOODMAN: So, what are—tell me about, Mayo Bartlett, these two lawsuits. We only have a minute, but you’re filing today in New Rochelle on behalf of Samuel Cruz. What are you demanding?

MAYO BARTLETT: Yes. Well, we’re demanding, first of all, a review in the training and policy and protocols. We’re also—we’re demanding damages for the loss of the lives of individuals here. But we’re hopeful that as a result of these lawsuits there will be significant changes, so that, hopefully, models like the Memphis Model can be implemented in New York City and in Westchester County, so that we don’t have to have two ladies in this situation where they have lost loved ones and that they’re trying to now find ways to reclaim their lives.

AMY GOODMAN: I want to thank you all for being with us. I know this is very difficult to retell these stories. We want to thank Elsa Cruz, wife of Samuel Cruz; Hawa Bah, mother of Mohamed Bah—both men killed by police when their loved ones called 911 to get them help. Randolph McLaughlin and Mayo Bartlett, co-counsels representing the Bah and Cruz families. And thanks so much in Memphis to Sam Cochran, who spent 20 years heading the Memphis Police Department’s Crisis Intervention Team, now project coordinator with the University of Memphis’s CIT Center. 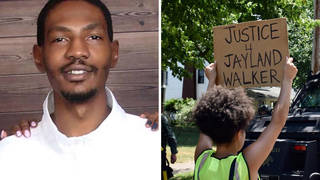