Iraq War veteran Tomas Young was left paralyzed in a 2004 attack in Iraq. Released from medical care three months later, Young returned home to become an active member in Iraq Veterans Against the War. He recently announced that he will stop his medicine and nourishment, which comes in the form of liquid through a feeding tube — a decision which will hasten his death. Joining us from his home in Kansas City, Young reads from his letter, “A Message to George W. Bush and Dick Cheney From a Dying Veteran.” Young says to Bush and Cheney: “You may evade justice but in our eyes you are each guilty of egregious war crimes, of plunder and, finally, of murder, including the murder of thousands of young Americans — my fellow veterans — whose future you stole.” Click here to watch part 1 of the interview. [includes rush transcript]

AMY GOODMAN: We turn to another clip from Body of War of more voices from the floor of the Senate, the Senate roll call of yes votes authorizing the war in Iraq in 2002.

SEN. BILL NELSON: The threat posed by Iraq grows with each passing day.

REP. JOSEPH PITTS: It’s a danger that grows every day.

SEN. JOHN McCAIN: Each day that goes by, he becomes more dangerous.

SEN. JOHN McCAIN: The longer we wait, the more dangerous he becomes.

SEN. ROBERT BYRD: Wait! Slow down! Don’t rush this through.

AMY GOODMAN: That was the late senator, West Virginia Senator Robert Byrd, as you hear the roll call of yes votes, from the film Body of War.

We come 10 years later, 10th anniversary of the war in Iraq. Tomas Young, Iraq War veteran, wounded April 4th, 2004, his fifth day in Iraq, shot in Sadr City, is now writing a letter on this 10th anniversary called “The Last Letter: A Message to George W. Bush and Dick Cheney From a Dying Veteran.” Tomas, can you read some of your letter to the former president and vice president?

“Your positions of authority, your millions of dollars of personal wealth, your public relations consultants, [and your privilege and power] cannot mask the hollowness of your character. You sent us to fight and die in Iraq after you, Mr. Cheney, dodged the draft in Vietnam, and you, Mr. Bush, went AWOL from your National Guard unit. Your cowardice and selfishness were established decades ago. You were not willing to risk yourselves for our nation but you sent hundreds of thousands of young men and women to be sacrificed in a senseless war with no more thought than it takes to put out the garbage.

TOMAS YOUNG: “Instead, this war” —

AMY GOODMAN: Tomas, we’re going to ask you to finish the letter after the broadcast, and we’re going to post it at democracynow.org. But in these last few seconds of the show, is there anything that would convince you not to end your life in the next few months?

TOMAS YOUNG: Not at this moment. There may come a time in the future when I say, “Hey, things are getting better; maybe I should reconsider this.” But at this moment, nothing in this world has made me change my mind as to what I’m going to do.

AMY GOODMAN: I want people to go to democracynow.org to see the second part of this conversation that we will continue with Tomas Young and his wife, Claudia Cuellar, from their home in Kansas City, and with legendary talk show host Phil Donahue. Last seconds, Phil?

PHIL DONAHUE: Well, it’s just a study in what the Americans have not seen. If you’re going to send young men and women to war—

PHIL DONAHUE: —show the pain. Otherwise, it’s going to be easy for us to have another one.

AMY GOODMAN: I’m Amy Goodman, with Juan González. Thanks for joining us. 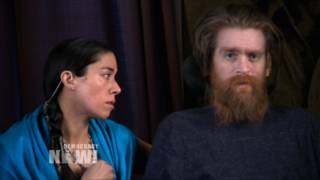