The growing campaign for divestment from the gas, oil and coal companies reached a new milestone today. 350.org Executive Director May Boeve announced more than 500 institutions representing over $3.4 trillion in assets have now made at least a partial commitment to divest from fossil fuels. In France, 19 cities have just endorsed divestment, including Lille, Bordeaux, Dijon, Saint-Denis and Île-de-France. Last week, the French National Assembly adopted a resolution encouraging companies and local authorities not to invest in fossil fuels. Over the past few months, the global fossil fuel divestment movement has claimed a number of victories: Uppsala, Sweden, and Münster, Germany, divested from fossil fuels, and the London School of Economics abandoned its holdings in coal and tar sands.

AMY GOODMAN: We are broadcasting live from COP21, the United Nations climate summit, here in Paris, France. We begin looking at a new milestone in the growing campaign for divestment from the gas, oil and coal companies that are fueling climate change. May Boeve, executive director of 350.org, made the announcement just before our broadcast today.

Now, I also want to say that because there are varying degrees of level of disclosure with these commitments, we don’t have the exact total of amount divested, but we do know that standard portfolios contain around 3.7 percent of fossil fuels. But the point here has never been exactly how much is pulled out in that way. That is why we measure the total amount of assets. That’s for a simple reason. A growing number of investors, representing a growing amount of capital, do not want to be associated with this industry any longer. It is a rogue industry. And that is what these commitments represent. It demonstrates that investors are taking climate risk extremely seriously.

So, to close, I just want to highlight some of the commitments themselves. Over 500 institutions have committed to divest. That includes, just today, 19 cities here in France, including Bordeaux, Saint-Denis and Dijon. The French Parliament has endorsed divestment. And between last September, when we announced the $2.7 trillion mark, and today, Uppsala became the largest city in Sweden to divest from fossil fuels; Münster became the first German city to divest; Melbourne, Australia’s second-largest city, committed; and the London School of Economics, another primary institution—we have someone to speak to that here—they have committed to divest.

So, we’re really seeing a surge of commitments. It’s very exciting. And to close, I just want to say thanks to all the people who helped make all these commitments possible. This movement works because it’s powered by tens of thousands of individuals who are powering these commitments forward. So we thank you, all of you who fought for divestment and who will fight for reinvestment of where those resources go. Thank you. 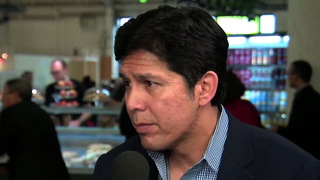