As we broadcast from the World Forum in The Hague at the Women Stop War conference, Amy Goodman interviews Colombian journalist Jineth Bedoya Lima, who has covered her country’s armed conflict for more than 18 years. She received the International Women of Courage Award in 2012 after she came forward about being kidnapped, tortured and raped by a paramilitary group while she reported on the arms trade, and notes, “I refused to go into exile after this, and I continued to work as a journalist.” Bedoya Lima went on to found the group Survivors United for Action.

StoryFeb 14, 2022V-Day to Earth Day: How Women in 70+ Countries Are Rising to End Violence Against Women & Our Planet

AMY GOODMAN: We’re inside the World Forum at The Hague, where women from around the world have gathered for the Women Stop War conference. It comes a hundred years after over a thousand women held the International Congress of Women to stop World War I. Well, this past Sunday, I spoke to the Colombian journalist Jineth Bedoya Lima, who received the International Women of Courage Award in the United States in 2012. She started Survivors United for Action in Colombia. I asked about what happened to her in her country. We were speaking as women from around the world were greeting each other as they gathered for the World Forum in The Hague.

JINETH BEDOYA LIMA: [translated] I’ve been covering the armed conflict in Colombia for 18 years as a journalist. And as part of my work, on the 25th of May of the year 2000, I was kidnapped by a paramilitary group in Colombia. I was documenting arms trafficking inside a prison in Colombia at the time. And they kidnapped me, tortured me, and three of them raped me. I refused to go into exile after this, and I continued working as a journalist in Colombia. And five years ago, I decided to come out and publicly speak about what happened to me.

AMY GOODMAN: How long were you held for?

JINETH BEDOYA LIMA: [translated] There were actually two different kidnappings. The first one, during which I was raped, I was held for 16 hours. The second kidnapping was in 2003, and that was by the guerrillas, the FARC guerrillas, and I was held by them for 10 days.

AMY GOODMAN: Were you also brutalized during that kidnapping?

JINETH BEDOYA LIMA: [translated] They did not attack me physically, but I was isolated, held separately. Me along with the photographer that was with me, we were treated in a degrading manner. They took our equipment. But clearly, the first kidnapping is the one that really changed my life.

AMY GOODMAN: Talk about what it meant for you to come out five years later. Had you kept this from the public, that this happened to you? So, talk about that decision to come out and then what you did.

JINETH BEDOYA LIMA: [translated] I think that making the decision to speak has been the toughest decision I’ve ever had to make. To go publicly and say that you’ve been a victim of sexual violence changes your life forever, because we live in a very machista world in which they tell you that you’re guilty for your rape. But I realized that if I didn’t speak, other women wouldn’t be able to, either. And I feel like having spoken out has changed the life for many women in Colombia. And that’s how I decided to take this on.

AMY GOODMAN: So, talk about what you did, the organization you started.

JINETH BEDOYA LIMA: [translated] When I decided to speak, a campaign began, which is now known internationally. It’s called “It’s Not Time to Be Quiet.” And the goal of this organization is to motivate a lot of women throughout the world to not feel shame of admitting and denouncing that they have been victims of sexual violence. For this past year, I’ve been part of the Nobel Women’s Initiative’s project as one of the survivors of sexual violence in the world who has the goal of trying to give courage to other survivors as a means to be able to change the reality of many women who, like us, have had to face sexual violence.

AMY GOODMAN: So what do you do with these survivors?

JINETH BEDOYA LIMA: [translated] The first thing is to tell them that they’re not alone. And second place, to explain that there’s a lot of ways to find support, to get ahead and move forward. But I think the most important thing, not necessarily with the survivors, but with the people who are responsible for changing the reality of women survivors, that’s the biggest work we have to do.

AMY GOODMAN: And talk about the government response, your neighbors’ response, the community, and if things have changed.

JINETH BEDOYA LIMA: [translated] In my case, I still receive threats. I have to live with bodyguards in Colombia and drive in a protected car, an armored car. But I think I have attained a lot and achieved a lot of things, as well. The first thing is to achieve that really sexual violence is now on the agenda of my country and the government. Thanks to our work, there’s now been a protocol set forth within the armed forces about sexual violence. And six months ago, I was able to achieve that the president of Colombia actually declared the day that I was kidnapped as a national day of women who have been victims of sexual violence. So that’s really a way to change women’s lives.

AMY GOODMAN: How have the lives of women changed who have spoken out?

JINETH BEDOYA LIMA: [translated] It’s been amazing. I believe that it’s been difficult, because it really is exposing oneself and exposing our pain, but at the same time, to feel that we’re not alone, to be able to raise our voices has shown these women that life can go forward, that our dignity is much larger than the weapons of the man who marked our bodies and our lives.

AMY GOODMAN: Jineth, through all of this, you are still a reporter and editor at El Tiempo in Bogotá. How do you continue to do that work?

JINETH BEDOYA LIMA: [translated] Because journalism brought me back to life, and journalism is what gives me life every day. I can’t imagine moving forward without writing stories. That’s my oxygen. 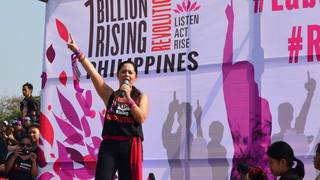 V-Day to Earth Day: How Women in 70+ Countries Are Rising to End Violence Against Women & Our Planet