“Police Brutality Has No Borders”: Parents of Missing Mexican Students on State Violence in the U.S.

As protests continued in Baltimore over the police custody death of Freddie Gray, relatives of some of the 43 students missing since a police attack in Guerrero, Mexico, marched to the United Nations in New York on Sunday. As they demanded justice over the forced disappearances of their loved ones seven months ago, the relatives drew parallels between state violence in Mexico and the United States. “We see that it’s the same police brutality, it’s the same system of government everywhere,” said Anayeli Guerrero de la Cruz, sister of a missing student. “Here in the United States, they are killing students, especially the African Americans, the same as in Mexico.” Special thanks to Robby Karran and Messiah Rhodes for filming.

Click here to see our interview in studio with relatives of three of the missing students.

ANAYELI GUERRERO DE LA CRUZ: [translated] Yes, we see that it’s the same police brutality. It’s the same system of government everywhere, because the police are from different states, but here in the United States they’re killing students, especially the African Americans, the same as in Mexico.

ESTANISLAO MENDOZA CHOCOLATE: [translated] Well, we have seen the news here, how they are killing African Americans also. It’s almost the same as what’s happening in Mexico. There, they are disappearing them, killing them. And here, they are also killing them. So we came here to ask for support from the United Nations.

MARÍA DE JESÚS TLATEMPA BELLO: [translated] Yes, we have the support of various organizations. All of them have their fight, and they’re helping us with our fight, so we can find our children. It’s the only way we are going to find our children, by standing in solidarity with one another. 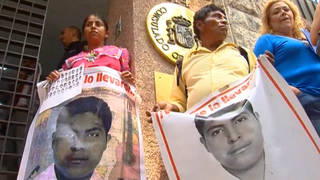