Republican presidential hopeful and Ohio Governor John Kasich on Sunday signed a bill that aims to strip funding from Planned Parenthood in the state. Although the organization isn’t explicitly named in the legislation, the law prohibits the state health department from contracting with organizations that provide any abortions—or work with those who do. The law will strip Planned Parenthood of $1.3 million in state and federal assistance. Planned Parenthood funds support a number of services, including breast cancer screenings, STD testing and programs working to prevent violence against women. State and federal laws already prohibit taxpayer dollars from going to fund abortions, with exceptions for rape, incest and the life of the mother. We speak with former Ohio state Senator Nina Turner, who once wore a T-shirt opposing anti-choice policies that read “GOP—Get Out of My Panties.” “I’m just sick and tired of Republicans across this country talking about smaller government, but they want government to be big enough to fit into a woman’s womb,” Turner says.

Republican presidential hopeful and Ohio Governor John Kasich Sunday signed a bill that strips funding from Planned Parenthood in the state. Although the organization isn’t explicitly named in the legislation, the law prohibits the state health department from contracting with organizations that provide any abortions—or work with those who do. The law will strip Planned Parenthood of $1.3 million in state and federal assistance. Planned Parenthood funds a number of services, including breast cancer screenings, STD testing and programs working to prevent violence against women. State and federal laws already prohibit taxpayer dollars from going to fund abortions, with exceptions for rape, incest and the life of the mother.

Speaking at a campaign rally in Virginia Monday, Governor Kasich was asked about defunding Planned Parenthood.

STUDENT: As a future nurse, I recognize that primary care and prevention is the most cost-effective healthcare for our nation, but that we are also facing an STD epidemic. Planned Parenthood’s largest percentages of services are towards STD treatment and prevention. Could you please tell me the economic and public health benefit of defunding this legislation that has treated over 4 million people seeking STD services just this past year?

GOV. JOHN KASICH: Yeah, let me—look, I think, unfortunately, for however those who support feel, I think it’s discredited itself. But I want to make one thing clear to you. Are you kidding me? We have robust women’s health funding in Ohio. We consider women’s health to be critical. But you don’t have to be captive of delivering it through an organization that, frankly, has largely discredited itself, OK?

To talk more about this, we’re going to Cleveland, Ohio, to talk to Nina Turner, former Ohio state senator.

Welcome back to Democracy Now!, Nina Turner. Can you talk about the governor’s decision to sign this legislation and how it made it through, well, your former Legislature, the Ohio state Legislature?

NINA TURNER: Thanks, Amy, and so glad that you are in Ohio.

Certainly, the governor and I have done our share of battling. I do not agree with the defunding of Planned Parenthood. As a matter of fact, I’m a national board member on Planned Parenthood. And as the young person whose voice I heard laid out all of the wonderful things that Planned Parenthood does, it just really doesn’t make sense. You know, the governor is pro-life, and we know that Republicans across this country, not just in the great state of Ohio, have been pushing to chip away at Roe v. Wade. So, it should come as no surprise that the governor would sign that bill.

What we need to do, though, however, because women’s health and their families’ health is in jeopardy—and Planned Parenthood, only 3 percent of what they do, Amy, we know, has anything to do with abortion. And as you laid out in your opening, that federal—that tax dollars, federal state funding, cannot be used—public funds cannot be used for that. But this is really about voting and making sure that people get out to vote in nonpresidential election years so that we have a Legislature full of people who have our ideas and thoughts. This is not the first time that the Ohio Legislature has tried to strip away funding from Planned Parenthood. And so, unfortunately, this time, they were able to do it, and the governor did sign it. And I’m not surprised about that.

AMY GOODMAN: Can you talk about the governor’s timing? You had the South Carolina Republican primary on Saturday. There was discussion about whether he would sign it right before. He didn’t, but he did sign it right after. And is it unusual to sign on a Sunday?

NINA TURNER: Well, not necessarily. I mean, the governor can decide when to sign, you know, so I’m not surprised by that either. In all my time in the Legislature, you know, stranger things have happened. I mean, again, the governor is pro-life, and for him, this Planned Parenthood bill is really very much in line with what he has talked about, although I vehemently disagree with him on Planned Parenthood. I disagree with my Republican colleagues in the Legislature and Republicans all across this country. What is really putting a woman’s right to have an abortion—because some of us are afraid to say the “A” word—it’s not just the Ohio Legislature, it’s not just Governor Kasich, but it is really an attack, an affront, against the great work of Planned Parenthood all across this country and people’s refusal to understand that over 97 percent of what Planned Parenthood does is to provide preventative healthcare. So I am disappointed, but I am not surprised. And as you know, when you talked about that T-shirt that I wore a few years ago, certainly the governor and I disagree on Planned Parenthood.

AMY GOODMAN: Talk about the T-shirt that you wore. Was this when you were a state legislator?

NINA TURNER: Yes, it was. And it was really a pushback against not—you know, the heartbeat bill that was introduced in the Legislature that would limit a woman’s access to abortion. You know, I’m just sick and tired of Republicans across this country talking about smaller government, but they want government to be big enough to fit into a woman’s womb. And so, that “GOP—Get Out of My Panties” T-shirt was a pushback against that kind of stuff.

It just makes no sense, with everything that people need in this country. We have almost 100 million folks in this nation who are either in poverty or on the brink of being in poverty. Seventy percent of those 100 million are women and children. And for people in the Legislature to be focusing in on Planned Parenthood or to be focusing in on women’s healthcare choices really makes no sense, when what we should be doing is putting people back to work, making sure that we make the requisite investments to educate our children, rebuilding our infrastructure. But yet and still, we have members of the Legislature all across this country who are not only cutting funds to Planned Parenthood, but really are trying to dismantle Roe v. Wade.

AMY GOODMAN: We’re also seeing a wave of interesting bills being introduced in several states, calling for waiting periods for men to get Viagra. Now, you introduced legislation like this, right, when you are an Ohio state senator, Nina Turner? Can you talk about it?

NINA TURNER: I did, Amy. I would like to think that I got that started. You know, again, just really concerned about what my male legislators were doing in Ohio, and since they have decided that the best way to utilize the taxpayers’ time or the voters’ time was to try to regulate women’s healthcare, I decided I needed to do my job and regulate men’s healthcare, as well. And as we know, according to the FDA, those pills do cause some problems for men, and so we’ve got to look out for men in this country, because they can’t make decisions about their own healthcare without government telling them what to do.

And I did introduce an erectile dysfunction bill. And in my bill, a man would have to get a signed affidavit by his significant other attesting to the fact that he has problems, have a psychiatric test, do a cardiac stress test, because, Amy, we’ve got to look out for men. And that’s really—that was the purpose of that bill. And it is rooted in scientific, medical evidence that those pills can cause problems with the heart and priapism and other types of problems for men. And so, we’ve got to look out for them, because they can’t make a decision without government.

AMY GOODMAN: Finally, under Governor Kasich, roughly half of the abortion clinics in Ohio have closed, is that right? How are women getting access to reproductive healthcare, that’s legal in this country, Nina Turner?

NINA TURNER: Yeah, well, Amy, you hit the—it is legal. It’s getting harder and harder in our state for women to have that access. And so, again, the governor and I disagree on this, and so I want to make that plain. And the reason why I’m saying that is because the governor and I do have a relationship. We are friends. We have done some great work together—most recently, the task force on Ohio—the task force on community and police relations. And so, we can work together and do great things, and that is vitally important—and certainly, given all of the shootings that have happened, the ability to bridge the gap between the community and police, particularly the African-American community.

But on a woman’s right to choose, the governor and I are strictly on opposite sides, and any—opposite sides. And anytime you have government getting itself in the way of healthcare access, we have a problem. And so, Amy, ad nauseam, I am going to continue to say that this is really about the ballot box and that we cannot nation-build every four years. We nation-build every single year there’s an election. And so, the types of people that we elect to the Legislature, to the Governor’s Mansion, to the Secretary of State’s Office—you name it—will have an impact on our lives. And so, if we want to have legislatures that will not push us back in time, then we have to get out to vote for people who understand that Roe v. Wade, number one, is the law of the land, and, number two, a woman should have the right to decide her own reproductive health needs, period. 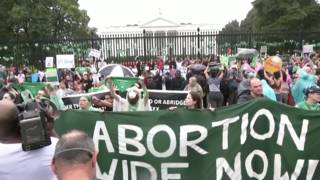