Amnesty International Reveals the Bomb That Killed 16 Civilians in Yemen Was Made in the U.S.A.

A major new investigation by Amnesty International reveals a bomb that killed 16 civilians in Yemen’s capital last month was made in the U.S.A. Among the survivors was 5-year-old Buthaina, whose photograph went viral in the aftermath of the strike. She lost her entire family in the strike. Amnesty International’s arms expert analyzed remnants of the weapon and found clear markings that matched U.S.-made components used in laser-guided, air-dropped bombs. Coalition airstrikes continue to be the leading cause of child casualties, as well as overall civilian casualties. The latest finding by Amnesty comes as some European Union countries recently tabled a motion at the U.N. Human Rights Council calling for an independent inquiry into human rights abuses committed by all sides in the conflict. The U.N. high commissioner for human rights has called the humanitarian crisis in Yemen an “entirely man-made catastrophe.” We speak with Raed Jarrar, the advocacy director for the Middle East and North Africa at Amnesty International USA.

AMY GOODMAN: We begin today’s show in Yemen, where a new investigation reveals a bomb that killed 16 civilians in the capital Sana’a last month was made in the U.S.A. At least 17 more were injured, when their residential building was destroyed in a direct hit. Among the survivors was 5-year-old Buthaina, whose photograph went viral in the aftermath of the strike. She lost her entire family in the strike. Amnesty International’s arms expert analyzed remnants of the weapon and found clear markings that matched U.S.-made components used in laser-guided, air-dropped bombs. The August 25th airstrike hit a group of homes, severely damaging three of them and killing seven children, including all five of Buthaina’s brothers and sisters. Coalition airstrikes in Yemen continue to be the leading cause of child casualties, as well as overall civilian casualties.

The latest finding by Amnesty comes as some member countries of the European Union [tabled] a motion at the United Nations Human Rights Council calling for an independent inquiry into human rights abuses committed by all sides in the conflict. The U.N. high commissioner for human rights has called the humanitarian crisis in Yemen an “entirely man-made catastrophe.”

Raed, welcome back to Democracy Now! Tell us exactly what Amnesty found in its report.

RAED JARRAR: So, as you mentioned, there was an attack on August 25th. And the attack garnered the attention of the Arab world. What Amnesty found is that the weapon that was used in that attack was a U.S. laser-guided bomb. And we found that out with collaboration with a local Yemeni journalist who took pictures of the site, took pictures of remains of bomb parts, shrapnels, other parts that that journalist found and sent it to our teams. And our experts looked into these photos and determined that some of these parts are definitely linked to U.S.-made laser-guided bombs.

So, it’s very significant for a couple of reasons. The first one is that this links the U.S. directly to what appears to be a violation of international law, maybe a war crime, that needs to be investigated. And the other reason is that this particular incident is such a high-profile incident that having a documented U.S. role in it will have an effect on how Yemenis and people in the region and the Arab world will view the U.S. role there. It will expose how involved—how directly involved the United States is in the war in Yemen.

AMY GOODMAN: Can you talk about this direct hit that happened, who Buthaina is, the 5-year-old girl, and what exactly happened to her family?

RAED JARRAR: So, Buthaina had so much attention in the Arab world because there was a TV interview. Some TV reporter went to the hospital to check on her. And she’s a 5-year-old girl who, you know, just came out of this huge attack that killed 17 civilians, including her entire family. So the reporter talks to her and asks her about her family. You know, she answers with like her innocence. She answers—she says her family went to heaven. She like tries to open her eyes, but she can’t open them because she’s injured, so she uses her fingers to open her eyelid. And that one picture of her opening her eyelid with her little fingers ended up being this iconic photo. It went viral. It’s a symbolic photo of a child seeing the world. Like people talk about Buthaina’s eyes, seeing the world through Buthaina’s eyes. So, it got a lot of attention in the Arab world, in social media and even in mainstream media.

Now, we knew all along that it was the Saudi-led coalition that was behind the attack, because the Saudi-led coalition issued a statement admitting that they hit the house. According to them, it was because of a technical error. And they said they’re going to investigate themselves. So, according to everyone who has been following that alleged investigation, nothing has happened. There is no—there are no signs that Saudi Arabia or other countries involved in the coalition have been taking any steps towards investigating themselves or holding anyone accountable. And that’s why Amnesty International is calling for an international investigation into what happened, into this particular incident, into other incidents that appear to be violations of international law, by all parties, including the Saudi-led coalition.

AMY GOODMAN: How did you access the shrapnel in order to identify the bomb that killed Buthaina’s whole family?

RAED JARRAR: A local journalist, a Yemeni journalist, took pictures of the building and went through the rubble and dug out parts of the shrapnels and took pictures of them and sent them to Amnesty International, to our team. And so, what our team of experts found was a small piece of a computer board, a motherboard, that is linked to guided missiles, so U.S. laser-guided bombs. And they identified that it’s 100 percent linked to a U.S.-made guided bomb. So the information came through the local journalist, and the analysis happened through our team of experts.

AMY GOODMAN: Can you talk about the larger role of the U.S., this being one example?

RAED JARRAR: The U.S. is very involved in the war in Yemen. The U.S. is very involved in multiple armed conflicts in the Middle East region. And the involvement, in some cases, are direct involvement, like we have seen U.S. direct bombardment and ground troop involvement in Iraq and Syria and other parts of the Middle East. In Yemen, the U.S. involvement has been very significant through selling weapons to the Saudi-led coalition, also through other ways, such as refueling fighter jets of the Saudi-led coalition and also providing them with intelligence and targeting information. So there’s a lot of involvement there.

And this involvement—and that is one of the other points that Amnesty International is making, and we’ve made this point over and over. This is not only about Saudi Arabia or Emirates or other members of the Saudi-led coalition committing war crimes or violations of international law. The Trump administration, the U.S. government, is also complicit in these violations of international law, including war crimes, because they are selling weapons to countries, knowing that these weapons will be used for violations, knowing that these weapons will be used to kill civilians. So, that is the—one of the important angles, is that this is not only an action that we’re requiring because of violations of a third party, this actually constitutes a violation by the U.S. government. And the U.S. has to abide not only by international law in this regard, but also by U.S.'s own law. You know, there are U.S. laws and regulations that prohibit the U.S. from transferring weapons to other countries when we have enough suspicion or knowledge that the weapons will be used for gross violations of human rights or war crimes. So, it's a very serious involvement. The U.S. involvement in Yemen is extremely serious.

And I think now that we have confirmed that this iconic attack that has killed Buthaina’s family, that this attack also resembles—or, is also an example of a U.S. involvement by supplying Saudi Arabia with the weapons that were used to kill these civilians, I think this should be another—there should be another push to demand that the Trump administration immediately halts all weapons sales to the Saudi-led coalition. This is something that can happen and should happen immediately, that no more weapons is sold to Saudi Arabia or any other members of the coalition, because we have to stop the supply of weapons that are being used to kill civilians.

AMY GOODMAN: Can you talk about the resolution that was presented to the U.N. Human Rights Council by the Dutch calling for a new entity? This was tabled, that would investigate what’s going on?

Now, unfortunately, the U.S. is not supportive of that resolution, either. The U.S. seems to be trying to push another resolution that has been introduced by a number of Arab countries, including Saudi Arabia. And that other resolution tries to reiterate the importance of investigating crimes or alleged crimes of violations through the local and regional bodies. And the idea of relying on Saudi Arabia to investigate itself doesn’t sound bad as a principle, but it’s actually not working. There are no—there is no evidence that Saudi Arabia has been able to investigate itself and its violations by itself. And that’s why many countries and many international organizations, including Amnesty International, have been calling for the establishment for this international inquiry.

So, it will be a close vote, if the vote happens Thursday or Friday. It’s going to be a close vote. I think out of the 47 members of the Human Rights Council, it’s almost split now. And we’re all watching it very closely. And I am hoping that it will pass, because having an international body to investigate these war crimes is extremely important to hold individuals and governments who have committed violations—to hold them accountable and to ensure that future attacks will also be investigated and any potential crimes will not go unpunished.

AMY GOODMAN: Well, Raed Jarrar, I want to thank you for being with us, advocacy director for the Middle East and North Africa at Amnesty International USA.

Later in the broadcast, we’ll look at the nuclear ban that over 50 countries have signed onto, the nuclear weapons ban. But next up, thousands gather outside Washington, D.C., in Landover, Maryland, to remember the human rights activist and comedian Dick Gregory. Stay with us. 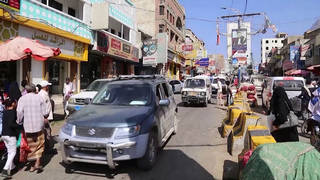