In Seattle, Socialist City Councilmember Kshama Sawant has been re-elected in a race that pitted her against Amazon — Seattle’s largest private employer and one of the most powerful companies in the world. Overall, Amazon poured $1.5 million into Seattle’s City Council election and backed Sawant’s opponent, Egan Orion, with nearly half a million dollars. Kshama Sawant is Seattle’s first Socialist politician elected in nearly a century. She has successfully pushed a number of progressive policies, including making Seattle the first major American city to adopt a $15-an-hour minimum wage. Kshama Sawant joins us from Seattle. The re-election victory “has been a major repudiation, not only of Amazon and of Jeff Bezos himself, as the richest man in the world, but also it has been a referendum on the vision for Seattle,” Sawant says. “The voters in Seattle have spoken, that Seattle is not up for sale.”

JUAN GONZÁLEZ: We end today’s show in Seattle, where a group of progressive city councilors were able to beat back a $1.5 million campaign by Amazon to flip the City Council. Seven of the seats on the Seattle City Council were up for grabs in last week’s election, which was widely seen as a referendum on Amazon, the city’s largest private employer and one of the most powerful companies in the world. Five candidates backed by Amazon and other business interests lost their bids for council seats. Perhaps the most visible face in the political fight against Amazon is Socialist City Councilmember Kshama Sawant, who has been re-elected in a race that pitted her against Amazon-backed candidate Egan Orion. Amazon poured nearly half a million dollars into that race alone.

Kshama Sawant, joining us now from Seattle, welcome back to Democracy Now! Talk about the campaign against you and your progressive slate’s victory.

KSHAMA SAWANT: Thank you so much, Amy and Juan, for having this very, very important and, indeed, absolutely historic event that has happened in Seattle. And as you said, it has been a major repudiation, not only of Amazon and Jeff Bezos himself, you know, as the richest man in the world, but also it has been a referendum on the vision for Seattle. And I think Seattle is a microcosm for metropolitan areas in general. You know, what should our urban spaces look like? Should our cities be playgrounds for the very wealthy, or should they be places where ordinary people can live and thrive? And I think it is beyond any doubt that the voters in Seattle have spoken, that Seattle is not up for sale. Our democratic process in the city, you know, the elections are not up for sale.

And it has happened in this dramatic fashion, where not only Amazon — you know, Amazon is obviously the most visible player in the attempted sort of hostile corporate takeover that they did this year, in this year’s election, but it wasn’t just Amazon. It was the entire might of the corporate elite, of the capitalist class, that we went up against. So, it’s the trillion-dollar corporation Amazon, but also corporate real estate, all of the large businesses that fought viciously against $15 an hour four years ago, and also the businesses that were completely against the tax on big business that we attempted, and then was repealed, shamefully, by the majority of the City Council last year. And so, I think that this — you know, this shows what a tremendous opening there is not only for the left to seize opportunities, but, as you have seen, as a socialist movement, we have a grassroots socialist movement, went up against the richest man in the world, and we were able to prevail.

JUAN GONZÁLEZ: And also, you neglected to mention there the role of the media. The Seattle Times, of course, if you want to talk about their role in terms of this election, and also the fact that the City Council had suffered a defeat a year earlier, when Amazon effectively forced it to rescind a tax for affordable housing?

KSHAMA SAWANT: Yes. And, in fact, the role of the media is integral to the whole political process under capitalism. And it’s diametrically opposite to what you’re doing on Democracy Now!, and that’s why it’s really, really important that you’re covering this analysis here.

I mean, just to give you an example, The Seattle Times editorial board, which has been a longtime conservative, establishment, pro-big business and also pro-right-wing ideas, spilled so much ink, not only this year, against my campaign specifically, against my Socialist council office, against our movement-building approach, but, as you said, Juan, last year, when we — when our movement attempted to bring what we call the Amazon tax, which is a tax on the largest businesses, in order to change what we have as the status quo, which is a corporate tax haven in a city with the nation’s most regressive tax system, and The Seattle Times editorial board spilled so much ink spreading lies, distortion and misinformation about that tax, and then they carried that on this year.

And so, you know, while, on the one hand, all this corporate money into the four — over $4 million in the corporate PACs that were dumped by all these corporations, by the billionaires — while, on the one hand, it has completely backfired, and it showed that voters are rejecting this kind of attempted takeover, but, on the other hand, it also bought them incredible numbers of attack mailers that were sent to people’s mailboxes, endless attack ads on every type of social media and other media, and then, of course, the corporate media doing the bidding of the billionaire class. We were up against all of that.

And the fact that we have won despite that, not only the progressive slate, which is an incredibly important event, and it was important that we built towards this progressive unity, it’s a really important demonstration of how progressive movements can have honest debates and discussions among ourselves, but it’s also important for us to take a principled, unified stance against the billionaire class, which is exactly what we have been able to accomplish. And I’m really proud of rank-and-file Democrats and grassroots Democratic Party leaders and organizers taking a stand in solidarity with the Socialist movement and working together.

And, you know, our movement wasn’t just about, OK, making an abstract statement against corporations. You know, this whole battle has unfolded from the wake of the $15 victory. But as we went, we kept building our movement. We won landmark renters’ rights. We won Indigenous Peoples’ Day. And what we won most of all is the beginning of the empowerment, the emboldening of ordinary people, of working-class people, and the beginnings of a movement, an incredible movement that has started here, including with the leadership of my office, for rent control without loopholes, for a Green New Deal, for expanding publicly owned social housing by taxing big business —

AMY GOODMAN: And, Kshama Sawant, we’re going to talk about that program in Part 2 of our discussion, which we’re going to post online at democracynow.org, and also ask you about the news that Jeff Bezos called Michael Bloomberg, one billionaire to another, and asked him to jump into the presidential race. We’ll ask you all about that, the man who took the progressive councilmembers on, richest man in the world, the head of Amazon, that poured one-and-a-half million dollars in to defeat your slate. Kshama Sawant, Socialist city councilmember in Seattle, just re-elected for a third term. I’m Amy Goodman, with Juan González. Thanks so much for joining us. 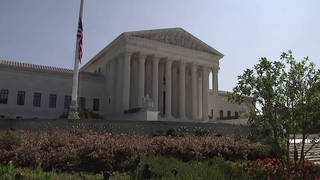