The second witness who testified live in the first primetime hearing of the House select January 6 committee was Capitol Police officer Caroline Edwards, who suffered a traumatic brain injury as she tried to hold the line outside the Capitol with fellow officers. She was with officer Brian Sicknick, who she said appeared to have been sprayed in the face and was extremely pale. Sicknick died the next day. Sicknick’s fiancee sat behind Edwards as she testified. Edwards said the pro-Trump mob included Proud Boys leader Joseph Biggs, who is now facing federal seditious conspiracy charges. “What I saw was just a war scene. It was something like I’d seen out of the movies. I couldn’t believe my eyes. There were officers on the ground. You know, they were bleeding,” recalled Edwards. “I was slipping in people’s blood. … It was carnage. It was chaos.”

AMY GOODMAN: The other witness who testified live during Thursday’s primetime hearing was Capitol Police officer Caroline Edwards, who suffered a traumatic brain injury as she tried to hold the line outside the Capitol with fellow officers. She was with officer Brian Sicknick, who she said appeared to have been sprayed in the face, was extremely pale. Sicknick died the next day. Edwards testified the pro-Trump mob included Proud Boys leader Joseph Biggs, who’s now facing federal seditious conspiracy charges. At the hearing, a number of police officers and Sicknick’s fiancee sat behind Caroline Edwards as she testified.

CAROLINE EDWARDS: The tables started turning, once the — what is now that — the Arizona group — that’s what you said — the crowd with orange hats, they came up chanting “F-U-C-K antifa!” And they joined that group. And once they joined that group, Joseph Biggs’ rhetoric turned to the Capitol Police. He started asking us questions like, “You’ve — you didn’t miss a paycheck during the pandemic,” mentioning stuff about — our pay scale was mentioned, and, you know, started turning the tables on us.

And I’ve worked, I can conservatively say, probably hundreds of civil disturbance events. I know when I’m being turned into a villain. And that’s when I turned to my sergeant, and I stated the understatement of the century. I said, “Sarge, I think we’re going to need a few more people down here.”

You know, at that time, we started holding on, grabbing the bike racks. You know, there weren’t many of us. So I grabbed the middle between two different bike racks. And, you know, I wasn’t under any pretense that I could hold it for very long, but I just wanted to make sure that we could get more people down and get our CDU units time to answer the call.

So, we started grappling over the bike racks. I felt the bike rack come on top of my head, and I was pushed backwards. And my foot caught the stair behind me. And I — my chin hit the handrail. And then I — at that point, I had blacked out. But my — the back of my head clipped the concrete stairs behind me.

REP. LIZ CHENEY: And you were knocked unconscious. Is that right, Officer Edwards?

REP. LIZ CHENEY: But then, when you regained consciousness, even with the injuries, you returned to duty. Is that right?

CAROLINE EDWARDS: Yes ma’am. You know, at that time, adrenaline kicked in. I ran towards the west front, and I tried to hold the line at the Senate steps at the lower west terrace. More people kept coming at us. It just seemed like more and more people started coming onto the west front. They started overpowering us.

And that was right about when MPD’s officers showed up. Their bike officers pushed the crowd back and allowed our CDU units, as well as theirs, to form that line that you see, that very thin line between us and the protesters or the rioters, you know, at that time. I fell behind that line. And for a while, I started decontaminating people who had gotten sprayed, and treating people medically who needed it. …

When I fell behind that line, and I saw — I can just remember my breath catching in my throat, because what I saw was just a war scene. It was something like I had seen out of the movies. I couldn’t believe my eyes. There were officers on the ground. You know, they were bleeding. They were throwing up. They were — you know, they had — I mean, I saw friends with blood all over their faces. I was slipping in people’s blood. You know, I was catching people as they fell. You know, I was — it was carnage. It was chaos. I can’t — I can’t even describe what I saw.

That does it for today’s show and our recap of the first public hearing of the U.S. House Select Committee to Investigate the January 6th Attack on the United States Capitol. The committee holds its next hearing Monday morning. We will live-stream it at 10 a.m. Eastern at democracynow.org. On Monday on Democracy Now!, we will speak with Democracy Now! co-host Juan González about his newly updated edition of the landmark book, Harvest of Empire: A History of Latinos in America. 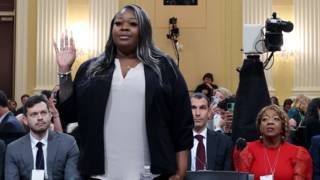