A coalition of immigrant rights organizations have sued the data broker LexisNexis for collecting detailed personal information on millions of people and then selling it to governmental entities, including Immigration and Customs Enforcement. The lawsuit alleges LexisNexis has helped create “a massive surveillance state with files on almost every adult U.S. consumer,” and accuses ICE of using information collected by LexisNexis to circumvent local policies in sanctuary cities. We speak with Cinthya Rodriguez, organizer with the immigrant justice group Mijente, who explains how “one of the biggest data brokers in the world” is “getting rich off of the backs of community members,” particularly among immigrant communities of color and activists.

A coalition of immigrant justice groups have sued the data broker LexisNexis for collecting detailed personal information on millions of people, then selling it to governmental entities, including ICE — that’s Immigration and Customs Enforcement. The lawsuit alleges LexisNexis has created a massive surveillance state with files on almost every adult U.S. consumer, and describes how law enforcement officers can surveil and track people based on information these officers would not, in many cases, otherwise be able to obtain without a subpoena, court order or other legal process. The groups also accuse ICE of using information collected by LexisNexis to circumvent local policies in sanctuary cities. The plaintiffs in the lawsuit include Organized Communities Against Deportations, Just Futures Law and Mijente.

And for more, we are joined by Cinthya Rodriguez, the national organizer with Mijente. She’s joining us from Chicago.

Can you lay out this lawsuit and the significance of filing it where you are, in the state of Illinois, Cinthya?

So, Mijente joins this lawsuit filed by Just Futures Law, by Legal Action Chicago, alongside our friends at OCAD and the Illinois Coalition for Immigrant and Refugee Rights, because, as you shared, LexisNexis is collecting and selling the data of more than 276 million people across the country, particularly using their Accurint product. And here in Illinois, we want to bring light to how this violates privacy and consumer rights, how it’s at odds with Illinois consumer protection and common law, because what we’re really talking about is one of the biggest data brokers in the world, LexisNexis, and how they’re getting rich off of the backs of community members by aggregating and selling our personal information, that can then lead to detention and deportations.

And I want to share that here in Cook County, Illinois, we are talking about various organizing and legal efforts that are happening to put a data broker like LexisNexis on notice. This lawsuit also follows an important hearing last month. Last month, the Cook County commissioners, spearheaded by Commissioner Alma Anaya, held the first hearing of its kind that we know of in the country that was investigating the local repercussions of this LexisNexis contract that we’re talking about, of this $22.1 million contract. So, investigating the local impacts of this contract, of ICE contracts with other data brokers, is really important. And so, during this hearing last month, the county had an opportunity to hear public testimony, witnesses — expert witnesses — that spoke about digital loopholes for sanctuary cities —

AMY GOODMAN: I wanted to go —

CINTHYA RODRIGUEZ: — and from the agency.

AMY GOODMAN: — Cinthya, to the Cook County meeting you were talking about, the recent hearing on the repercussions of ICE contracting third-party data brokers like LexisNexis, the Cook County Board of Commissioners hearing from immigrant justice advocates and community members, like Michelle Garcia, a member of the Illinois Coalition of Immigrant and Refugee Rights and Access Living. She said she used LexisNexis to search her own records and found dozens of pages of personal information on herself, family members, even other people who lived in her same apartment complex. This is what she said.

MICHELLE GARCIA: LexisNexis collected 43 pages of information about me, my family and my acquaintances. It was extremely disturbing, scary and overwhelming to see everything in writing that they have collected about my life as a Cook County resident. … This information being in the hands of a third party like LexisNexis, and then potentially in the hands of ICE, puts my loved ones and other community members at risk. I have the privilege of citizenship. But if I were one of millions of undocumented people living in the U.S., ICE could find me within a matter of hours by searching through a report like mine. ICE is still free, has free rein to go after anyone they believe is deportable.

AMY GOODMAN: So, that’s Michelle Garcia, member of the Illinois Coalition. How does LexisNexis get this information? And, of course, it goes way beyond the immigrant community in the United States, when you’re talking about 250 million people. What are LexisNexis products? What are people using that tracks them?

CINTHYA RODRIGUEZ: That’s right. I think one way that you can think about LexisNexis is a one-stop shop. They’re a one-stop shop for data points like addresses, phone numbers, license plate information, your social media information, but also things like medical history, credit scores. Michelle also spoke during the press conference about having information on her neighbors, right? The list can go on and on. And so, we want to be clear that here we’re talking about mass surveillance. Tabs are being kept, as you’re sharing, on immigrant communities, communities of color, on protesters. And at the end of the day, this is affecting us all, because this is happening without consent. It’s happening without people knowing, without a warrant or a subpoena or a court order.

And I also want to share that this is all really informed by research, right? We saw a Freedom of Information Act request earlier this year that revealed how, nationally, ICE agents ran over 1.2 million searches in the LexisNexis database over a seven-month period. And it’s really important to understand that these searches are happening through ERO, Enforcement and Removal Operations, which is the division of ICE that focuses on arrests. And as we’ve shared, I live here in Cook County, in the Chicagoland area, where the local Chicago field office ran — just themselves, ran over 13,000 of these searches.

AMY GOODMAN: “No Tech for ICE” immigrant justice advocates first exposed the multimillion-dollar contract between LexisNexis and ICE in Colorado through a FOIA that revealed the corporation was giving ICE access to real-time jail booking data from sheriff’s offices in the state of Colorado. Explain the significance of this and why it puts so many people in danger.

CINTHYA RODRIGUEZ: Definitely. So, before Cook County held this hearing, Colorado was the first place where we’re seeing that it was named publicly by community, that ICE is circumventing local sanctuary protections by contracting with data brokers such as LexisNexis. So, folks from the Colorado Immigrant Rights Coalition and other organizations in Colorado, and Mijente joined these groups, to expose an ICE contract from July 2021 that confirmed what we had been seeing and hearing, right? And so, this was breaking news, because in this contract language, it is explicitly stated that ICE is contracting with data brokers like LexisNexis to go around sanctuary protections. And this is happening through LexisNexis’s aggregation of public and commercial data and also, as you mentioned, real-time jail data.

For many years — right? — people have fought really hard and organized for sanctuary and welcoming protections, these policies that prohibit, or seek to prohibit, information sharing and cooperation between law enforcement and ICE. But now we have this $22.1 million contract with LexisNexis that is providing back-door access to people’s information and going against the spirit of sanctuary protections. So, Colorado was the first place to speak up about this —

CINTHYA RODRIGUEZ: — followed by Cook County. And we know that local organizing is going to continue to close these digital loopholes that make it easier for ICE to detain and deport our people.

AMY GOODMAN: And we will continue to follow this, Cinthya Rodriguez, national organizer with Mijente, working on the group’s No Tech for ICE campaign.

That does it for our show. Democracy Now! currently accepting applications for a people and culture manager. Learn more and apply at democracynow.org. I’m Amy Goodman. Thanks so much for joining us. 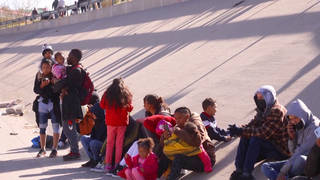