The mother of prominent Egyptian political activist and blogger Alaa Abd El Fattah began a hunger strike yesterday protesting her son’s detention by the country’s military council. Fattah was arrested last week after being accused of instigating clashes between military forces and Coptic Christians nearly a month ago at the state television building, Maspero. At least 28 people were killed in the incident. As calls among activists grow for limiting U.S. military assistance to Egypt, Secretary of State Hillary Clinton said that the United States is not in favor of imposing any conditions on American aid. Democracy Now! correspondent Anjali Kamat is in Cairo and filed this report. Special thanks to Jacquie Soohen of Big Noise Films and Mosireen and Sarah Carr for footage. [includes rush transcript]

AMY GOODMAN: We go back right now to Egypt. Juan?

JUAN GONZALEZ: Well, the mother of prominent Egyptian political activist and blogger Alaa Abd El Fattah began a hunger strike yesterday protesting her son’s detention by the country’s military council. Abd El Fattah was arrested last week after being accused of instigating clashes between military forces and Coptic Christians nearly a month ago at the state television building, Maspero. At least 28 people were killed in the incident.

As calls among activists grow for limiting U.S. military assistance to Egypt, Secretary of State Hillary Clinton said that the U.S. is not in favor of imposing any conditions on American aid. She was responding to a question from a reporter during a press conference after her meeting with Egyptian Foreign Minister Mohamed Kamel Amr in late September.

SECRETARY OF STATE HILLARY CLINTON: We are against conditionality. And I conveyed our position to the minister. We will be working very hard with the Congress to convince the Congress that that is not the best approach to take. We believe that the longstanding relationship between the United States and Egypt is of paramount importance to both of us. We support the democratic transition. And we don’t want to do anything that in any way draws into question our relationship or our support.

We also believe that the army has played a very stabilizing, important role during this period. You can see what happens when you either don’t have an institution like the institutions that Egypt has, including an army, and you’ve seen what happens when the army is not on the side of the people. Well, Egypt’s strong institutions, longstanding respect for the army and the role the army played was absolutely critical for the revolution.

ANJALI KAMAT: “Down with military rule!” This is what thousands were chanting as they marched towards a prison in downtown Cairo last week. They were demanding the release of one of Egypt’s best-known bloggers and activists, Alaa Abd El Fattah. Nine months ago, Egypt’s army sided with the popular uprising against former president Hosni Mubarak and promised to steer the country to democracy. But as the military began cracking down on civilians, many started to question its caretaker role.

The biggest blow came last month, when the army killed as many as 28 civilians, most of them members of the country’s Coptic Christian minority. On the evening of October 9th, tens of thousands were gathered outside the state media headquarters, known as Maspero, when the shooting began. Eyewitnesses filmed military vehicles running over crowds of people, but the ruling Supreme Council of the Armed Forces continues to deny any responsibility for the killings.

Outraged and devastated, Alaa spent the next few days at the morgue with the families of the victims and wrote about the experience in an Egyptian newspaper. Soon after, he was called in for questioning by a military prosecutor investigating the deaths in Maspero.

We met Alaa’s sister, Mona Seif, at a press conference about his arrest. She’s one of the founders of a nationwide campaign opposing the military trials of civilians.

MONA SEIF: Basically, the military court took over the investigation of the crime in Maspero, and they have been trying to blame someone, a third party, for what happened. So it’s not the army, it’s not the peaceful Copts, it’s someone else. They have a list of 12 individuals that are being charged with inciting violence and assaulting violence against the army and disruption of the peace of the community and so on. Among these individuals is my brother, Alaa, and Bahaa Saber, his friend and a political activist.

ANJALI KAMAT: But Alaa and Bahaa refused to cooperate with the investigation.

MONA SEIF: They declared to the prosecution that they are not accepting being questioned by them, that they are against military trials of civilians, and that, especially with the Maspero crime, we are accusing the army of killing the people and wounding them. We are accusing them of the crime. And the lawyers found out that the first person on the list of accused is Mina Daniel, our martyr who died under the trucks of the army in—on Maspero’s day.

MARY DANIEL: [translated] After they killed him, they wanted to smear his name and accuse him of violence. They might have killed Mina, but a million more Minas have come up who are demanding the truth.

ANJALI KAMAT: Although Bahaa Saber was released, Alaa Abd El Fattah was sentenced to 15 days in detention, subject to renewal. The charges against him include inciting violence, assaulting army officers, and stealing the army’s weapons. Many believe the charges are bogus and say that Alaa was targeted because of his activism. No stranger to Egytian prisons, Alaa was arrested five years ago while protesting for an independent judiciary.

MONA SEIF: He is my brother. I know that he is protected a bit because of how public he is, so I feel sort of relieved that probably he’s not going to be tortured. But it doesn’t make it, you know, easy on him.

ANJALI KAMAT: Mona pointed out that Alaa is only one among 12,000 civilians who have been tried in military courts this year. Eight thousand of them are still in prison.

MONA SEIF: The main targets of military trials are activists and people who joined in either protests in the street or wrote something that criticized the army and the Supreme Council of Armed Forces, or participated in different major strikes in factories or different institutions. So, it’s basically now a tool to—for the counterrevolution to put an end to the revolution.

ANJALI KAMAT: Earlier this year, a military court sentenced blogger Maikel Nabil to three years in prison for insulting the military. He’s been on a hunger strike for more than two months now. Several other Egyptian journalists and bloggers have also been targeted, and the military has raided the offices of at least two television stations.

MONA SEIF: They are the same regime. It’s not Mubarak. It’s his regime, and the generals are part of his regime. The generals are applying and going by the book that Mubarak was ruling the country with.

ANJALI KAMAT: Less than a year since Egypt’s historic uprising, little seems to have changed—except for one thing: the fearlessness of the people.

MONA SEIF: It’s not anymore the fairy tale story of Tahrir, of, you know, these people uniting in one square, kicking off Mubarak, and then everything will be fine. It’s a far more painful road than I expected, and on a very personal level, as you can see. But I’m still very hopeful. I’m still very hopeful because, despite all their tactics, people are not afraid. People are not sitting at home whining. People are facing them and confronting them in the street every day. And I’m not talking about me or my brother or, like, political activists who, you know, who have been doing this. I’m talking about the mothers of detainees who go every week to the Ministry of Defense, defy and challenge the authority of the army and the Supreme Council of Armed Forces. I’m talking about, really, people. So I’m still hopeful. 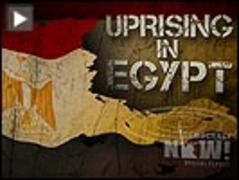 The Egyptian Revolution: A Democracy Now! Special on Mubarak’s Resignation