A showdown is expected in Texas today after a state Senate committee approved a bill critics say would shut down nearly all of the state’s abortion clinics and ban abortion at 20 weeks post-fertilization. An earlier attempt to pass the bill was thwarted last month when protesters raised their voices to drown out the proceedings following a nearly 11-hour filibuster by Texas State Senator Wendy Davis. Meanwhile in North Carolina, state House Republicans have advanced anti-choice restrictions by secretly attaching them to a bill on motorcycle safety. On Thursday, the state House voted 74 to 41 to approve the bill, which imposes a series of restrictions critics say are aimed at shutting down abortion clinics. The provisions are similar to those passed by the North Carolina state Senate last week without a public hearing as part of a bill ostensibly designed to bar sharia law in the state. Republican Gov. Pat McCrory threatened to veto that bill. We speak to Janet Colm of Planned Parenthood in Central North Carolina. She was arrested on Monday at the state Capitol as part of the ongoing Moral Monday protests.

JUAN GONZÁLEZ: We turn now to the war on women’s health, which took a major turn Thursday as two states advanced far-reaching legislation to restrict abortion. A showdown is expected in Texas today after a state Senate committee approved a bill critics say would virtually end abortion access in the state. An earlier attempt to pass the bill was thwarted last month when protesters raised their voices to drown out the proceedings following a nearly 11-hour filibuster by Texas State Senator Wendy Davis. Another hero to emerge from the battle in Texas this week was Sarah Slamen. The video of her testimony Monday went viral. Let’s go to a clip.

SARAH SLAMEN: Thank you for being you, Texas Legislature. You have radicalized hundreds of thousands of us, and no matter what you do for the next 22 days, women and their allies are coming for you. Let’s start down the line. Senator Campbell, you’re an ophthalmologist, so I won’t be making you the expert on reproductive health. We can give you all the children with chlamydia and herpes in their eyes, since we don’t have sex ed in the state. And Senator Hegar? You’re about as helpful—

SARAH SLAMEN: You are about as—

SEN. JANE NELSON: I will not allow—

SARAH SLAMEN: Excuse me! This is my government, ma’am. I will judge you!

SEN. JANE NELSON: I will not allow you—

SARAH SLAMEN: I will judge you, ma’am. Is this counting against my time?

SARAH SLAMEN: The senator talking against me?

SARAH SLAMEN: OK, well, I will just go ahead and talk over her.

SEN. JANE NELSON: I will not allow you to disrespect—

SARAH SLAMEN: And this is how big of a fraud I knew you were for being so proud of these proceedings all night.

SEN. JANE NELSON: I will not allow you to disrespect any senator.

SARAH SLAMEN: It’s a low bar that you hold yourself to that you simply allowed us to speak. And I will speak against an ophthalmologist who says—

SEN. JANE NELSON: And I will ask [inaudible]—

SARAH SLAMEN: Everyone on the Internet can see what you’re doing right now. This is a farce. The Texas Legislature is a bunch of liars who hate women. These men are paid by all of you to be here, a million dollars during a special session.

SARAH SLAMEN: —so that they can tell us what to do with the inside of our bodies.

JUAN GONZÁLEZ: That was Sarah Slamen testifying before a Texas state [Senate] committee on Monday. She was hauled away from the chamber by state troopers.

Another battle to maintain abortion access has erupted in North Carolina, where House Republicans advanced anti-choice restrictions by attaching them to a bill on motorcycle safety. On Thursday, the state’s House voted 74 to 41 to approve the bill, which imposes a series of restrictions critics say are aimed at shutting down clinics. Republican lawmakers claim the new rules for abortion clinics will make women safer. The provisions are similar to those passed by the North Carolina state Senate last week without a public hearing as part of a bill ostensibly designed to bar sharia law in the state. Republican Governor Pat McCrory threatened to veto that bill. The new version now goes to the state Senate for approval.

AMY GOODMAN: On Monday, more than 60 people were arrested as the so-called “sneak attack” on women’s rights became the focus of ongoing Moral Monday protests in North Carolina. One of those arrested was our next guest, Janet Colm, president, CEO, founder of Planned Parenthood of Central North Carolina. She joins us from Raleigh, North Carolina.

Welcome to Democracy Now! Can you please explain, Janet Colm, how the anti-choice bill was attached to the motorcycle safety bill?

JANET COLM: Well, it’s a complicated maneuvering having to do with some of the legislative rules, but basically it comes down to just another sneak attack on women’s health, where they’ve gutted one bill, substituted this language and then passed it through yesterday afternoon. It goes to the Senate, we think, next week.

JUAN GONZÁLEZ: And what’s likely to happen in the Senate?

JANET COLM: Well, it’s—I don’t know. We now have two bills. We have the one that the Senate snuck through. We have the one that the House snuck through. They’re essentially the same. And almost certainly one of them will end up on the desk of Governor McCrory. And we are hoping that he will stick to his campaign promise not to sign into law any further restrictions on abortion. Of course, in North Carolina, one of the challenges that we face is that this law can also go into effect if he doesn’t sign it. So, we’re almost certainly looking at increased restrictions on abortion providers.

AMY GOODMAN: During the debate in his 2012 campaign, North Carolina Governor Pat McCrory said he would not support any further restrictions on abortion access when he was asked by the moderator.

JANET COLM: Yeah, he was very clear about that.

LAURA LESLIE: Speaking of women’s health issues, this past year state lawmakers passed the Woman’s Right to Know Act, a new law that added restrictions and, some say, made it more difficult for women to get abortions in North Carolina. If you’re elected governor, what further restrictions on abortion would you agree to sign? I’ll start with you, Mr. McCrory.

AMY GOODMAN: So there you have it. That’s the North Carolina governor, Pat McCory. Can you, Janet Colm, explain what is in this bill that’s just passed the House?

JANET COLM: Well, it’s not totally clear. There are—it really is a laundry list of all the abortion restrictions that they would hope to pass, including allowing the Department of Health and Human Services to increase the restrictions on abortion facilities. But it is not clear what those are, and the timetable for implementation is not clear. So one of our big objections is that this bill is just, at this point, very, very vague. There is no question, though, that they are going to increase restrictions and that it will cause severe hardship to the women who seek abortion in the state.

JUAN GONZÁLEZ: And given what’s happened in Texas and now in North Carolina, your sense of whether there’s a tipping point approaching in terms of state efforts to restrict choice among women?

JANET COLM: Well, I thought you were going to be talking about the tipping point that’s come in terms of the reaction to these laws, because that is what I see. We’ve certainly seen it in Texas, and we’ve certainly seen it in North Carolina, that this has just lit a fuse in the supporters of a woman’s right to choose and all the other issues that are connected with this, including prenatal care and Medicaid expansion, which our state also cut off, which means that half a million people in the state will not have access to insurance under the Affordable Care Act. So, I think that all of these issues are connected, and they are infuriating the majority of North Carolinians.

AMY GOODMAN: Is this the Occupy Wall Street moment for the pro-choice movement? I mean, you, yourself—you’re CEO of Planned Parenthood—you got arrested on Monday.

JANET COLM: Yeah, yeah. I think it’s the Moral Monday moment for the pro-choice movement. We’re really proud and happy to be in the coalition that is forming, spearheaded by the NAACP. And as Reverend Barber often says, we are all in this together, you know, from voting rights to healthcare and unemployment and education. These are all issues that affect women and our families, and we’re going to stand arm in arm.

AMY GOODMAN: Well, is it true? Rumor has it you have the same sneakers, Janet, as Wendy Davis, the pink sneakers—

AMY GOODMAN: —that she used for for her 11-hour filibuster.

JANET COLM: Yeah, the rumor is true, and I wore them to jail.

AMY GOODMAN: Well, Janet Colm, I want to thank you for being with us. 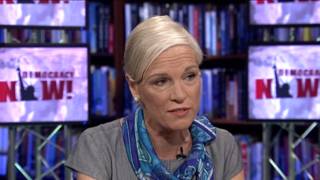