While no Credit Suisse executives will be heading to jail for facilitating widespread tax evasion, Occupy Wall Street protester Cecily McMillan has been sentenced to three months in jail and five years of probation. McMillan was arrested in March 2012 as protesters tried to re-occupy Zuccotti Park. She was convicted of deliberately striking an officer with her elbow. McMillan says she swung her arm instinctively after being grabbed in the right breast from behind. Facing up to seven years in prison, McMillan’s case sparked national outcry and pleas for leniency — even from a majority of the jurors who initially found her guilty. We hear from a group of McMillan’s supporters who spoke outside the courthouse on Monday following her sentencing, and speak to two guests: Ryan Devereaux, a reporter with The Intercept who covered the Occupy protests, and James Henry, a lawyer and an economist.

StoryJul 14, 2014“Your Body Is No Longer Your Own”: Freed OWS Activist Cecily McMillan on Plight of Women in Jail

AARON MATÉ: Well, while no Credit Suisse executives will be heading to jail for facilitating widespread tax evasion, a New York City judge has sentenced an Occupy Wall Street protester to three months in jail and five years of probation. Cecily McMillan was arrested in March 2012 as protesters tried to re-occupy Zuccotti Park. She was convicted of deliberately striking an officer with her elbow. McMillan says she swung her arm instinctively after being grabbed in the right breast from behind. McMillan faced up to seven years in prison. Her case sparked a national outcry and pleas for leniency, even from a majority of the jurors who initially found her guilty. Many of her supporters say the trial should have been about the police assaulting her, not vice versa.

MARTIN STOLAR: History will say that there was overpolicing of the Occupy Wall Street movement and that Cecily McMillan became an object of prosecution. I don’t see any reason why Cecily would be prosecuted for a felony, except to send the message out that says do not get yourself involved in protests, do not get yourself involved in demonstrations; otherwise, we’re going to severely deal with you, if we have a reason to do so. The fact that 90 percent of all the Occupy arrests were dismissed tells me that the police department made such bad arrests that not even the DA’s office could go forward and prosecute them.

REPORTER: How did this case compare with—you said you’ve done this a long time. This case any different, or it stands out at all?

REPORTER: Will there be an appeal?

MARTIN STOLAR: There will be an appeal. The notice of appeal was filed this morning. An appeal will be conducted to try to get a new trial and remove the stain of a felony conviction from Cecily’s record.

LUCY PARKS: We have a statement from the Justice for Cecily Support Team that I’m going to read for you all. So, today, Cecily McMillan was sentenced to 90 days in prison for being sexually assaulted by a police officer at a protest and then responding to that violence by defending herself. We all know that Cecily did not receive a fair trial, and this case will be fought in the court of appeals. The sentencing of Cecily McMillan has elicited an array of deeply felt responses from a broad range of individuals and communities, and it has also created a moment to think about what solidarity means. For many of us who consider ourselves to be a part of the Occupy movement, there is, first and foremost, a simple and deep sadness for a member of our community who has endured a painful and demeaning physical and sexual assault and now has had her freedom taken away from her. Cecily’s mom, L Nyrobi Moss, has a few words that she wants to say with us.

L NYROBI MOSS: My child has never been a martyr. What she is, is hope. What she is, is a testament to the generations that you can speak out and that your voice is not in vain. I just got a text from Cecily’s father that says she’s been vocal since she came out of the womb. And she really has. But without you guys and without your support, this trial, this case, what has happened here, would not have gone so far or reached so wide. And we definitely want to thank you for all of your support.

AMY GOODMAN: Cecily McMillan, again, has been sentenced to 90 days in jail. To talk more about this case, James Henry is still with us, former chief economist at McKinsey & Co., lawyer, economist, senior adviser to the Tax Justice Network. And also joining us, Ryan Devereaux, staff reporter at The Intercept. He also covered the Occupy Wall Street movement as a Democracy Now! fellow and reporter for The Guardian, and was there the night Cecily McMillan was arrested.

First to James Henry, your—you know, this contrast of Credit Suisse, the settlement that was reached with Credit Suisse, and who goes to jail? An Occupy protester.

JAMES HENRY: Well, I think this is just one of many such contrasts we have. The Obama administration, to me, is a mystery. I mean, they go after whistleblowers like, you know, no one has ever done before. They go after Aaron Swartz, who was a hacker up in Boston, a very talented guy. You know—

JAMES HENRY: Who ultimately committed suicide. I mean, I have—it’s hard for me, especially when I look at the history of the behavior of the financial institutions and the lack of integrity across the board, not only Credit Suisse, but the top 22 banks have been involved in—you know, as Credit Suisse was, in Libor rigging, currency rigging, the credit frauds of the mortgage collapse, money laundering—just rampant cases across the board. And they’re basically getting away with murder here. I think this is a disparity in sentencing. You know, it’s like they get time off for bad behavior.

AARON MATÉ: Ryan Devereaux, you were there the night Cecily McMillan was arrested. If you could set the scene for us, what was that protest like?

RYAN DEVEREAUX: Yeah, so it was six months after the initial occupation, and throughout the day was a celebratory mood. And into the evening, occupiers had sort of strung up some tents across the park with some wire. The police didn’t like this. They moved in. There was a call to disperse. A hundred, 150 or so occupiers had sort of gathered in the middle of the park, and the police just came in, row after row after row. And I—you know, as Amy said, I covered Occupy basically every day, every sort of action that happened. And that night stands out to me as probably the most violent night that I witnessed, including the evacuation, the initial evacuation, of the park.

AMY GOODMAN: Who was committing the violence?

RYAN DEVEREAUX: The police department, the NYPD. They came in, and I literally saw protesters dragged by their hair, you know, heard people screaming in pain. It was an extremely violent night. And I ended up seeing Cecily in handcuffs near the front of the park by the bus, where they were loading up people that they were arresting, sort of, for lack of a better word, flopping around on the sidewalk. And it was truly disturbing, while people screamed for medical attention for her.

AMY GOODMAN: She said she had a seizure.

RYAN DEVEREAUX: She did.

AMY GOODMAN: Your final thoughts on this?

AMY GOODMAN: About what we take away from that night?

RYAN DEVEREAUX: I think that it will be unfortunate if the only thing that people remember about that night is this one incident and this one conviction, because that night was emblematic of the way that the NYPD treated this movement, treated protesters and treated journalists for months on end. It was excessively violent.

AMY GOODMAN: We’re going to leave it there. Ryan, we’d like you to stay, because you have a remarkable piece in The Intercept, “Data Pirates of the Caribbean: The NSA Is Recording Every Cell Phone Call in the Bahamas.” And, James Henry, thanks so much for being with us, former chief economist at McKinsey & Co., now with the Tax Justice Network. This is Democracy Now! Back in a moment. 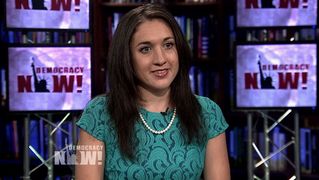 “Your Body Is No Longer Your Own”: Freed OWS Activist Cecily McMillan on Plight of Women in Jail