Police arrested more than two dozen people at the anti-Trump rally in Manhattan Thursday night, including Democracy Now!’s own videographers, Charina Nadura and Juan Carlos Dávila. They were taken into custody as they attempted to film the protest, and held for hours. After being released, they spoke out about what happened.

AMY GOODMAN: Police arrested more than two dozen people at the Trump protest, including Democracy Now!’s own videographers, Charina Nadura and Juan Carlos Dávila, who were taken into custody as they attempted to film the protest. After being held for hours, they spoke last night about what happened.

CHARINA NADURA: My name is Charina Nadura, and I’m working for Democracy Now! Tonight, we were filming a protest against Donald Trump at Grand Central, and me and my colleague, Juan Carlos, was following these protesters near 42nd Street who were trying to get inside the Hyatt hotel.

JUAN CARLOS DÁVILA: My name is Juan Carlos Dávila. As we were crossing the bridge in front of the Grand Central Station, arrests started happening.

POLICE OFFICER 1: Get back! Get back!

CHARINA NADURA: At the moment where Juan Carlos was filming the arrests of NYPD while they were beating up some of the protesters—

CHARINA NADURA: —I was holding my microphone, and Juan Carlos was holding the camera. And we were—we had our badges on our neck, and we kept saying, “Press!”

POLICE OFFICER 3: You have to move back.

PROTESTER: I’ve got to get my pump! I can’t breathe! I have asthma!

POLICE OFFICER 3: You have to move back. You’re interfering. Put the camera down. Bring it down.

POLICE OFFICER 3: Put the camera down. Bring it down.

CHARINA NADURA: The moment later, I saw Juan Carlos’ face on the ground with dirt all over his forehead, and about two to three police officers were on top of him and handcuffing him.

JUAN CARLOS DÁVILA: They threw me to the ground. They slammed my head against the pavement. And they twisted my arm. And, I mean, my wrists are red. Part of them are bleeding.

CHARINA NADURA: They took us here and put us in jail.

AMY GOODMAN: That was Charina Nadura and Juan Carlos Dávila, two Democracy Now! journalists who were arrested by police last night as they were filming the arrests and the protests at the anti-Trump rally in New York City.

In our last minute we have left, we’re still with Robert Scheer. You wrote the book, They Know [Everything About You]: How Data-Collecting Corporations and Snooping Government Agencies Are Destroying Democracy. What about this crackdown on journalists? They were arrested for five hours.

ROBERT SCHEER: And the perversion of this war on terror has become a war on the American people. Local police departments now have Palantir. So does New York, L.A. It’s mining data. This was formed by the CIA, not discussed. Local police departments get heavy duty equipment now. They’re able to spy on movements, infiltrate movements with the new technology—anybody who might dissent. We saw that in the crushing of the Occupy movement. It’s quite ominous. And unfortunately, Democrats, Senator Dianne Feinstein, Barack Obama, have been instrumental in doing this. They have not protected our civil liberties. And as a result, the police can run wild. And that’s what you saw there.

AMY GOODMAN: Juan, you know, you were calling in. I was calling in. Sam Alcoff, our video producer, was calling in and went down to get Charina and Juan Carlos out of jail. Unacceptable that they were arrested last night.

JUAN GONZÁLEZ: Yes, it is, because, clearly, we need to have journalists in the field and in the streets to be able to present this information and these events to the public. So it’s another sad day, unfortunately, when these young journalists and workers here for Democracy Now! were arrested.

AMY GOODMAN: Robert Scheer, final comment? Again, your book, They Know Everything About You.

ROBERT SCHEER: Yeah, look, we have accepted a surveillance state, an Orwellian state, in which we are the enemy—”we” being any whistleblower, any dissenter. You know, Hillary Clinton can say that Edward Snowden is a traitor because he informed us what’s going on. You have Microsoft now telling us the government won’t even let us—Microsoft tell us they’re snooping on our email. And so you have a surveillance society of vast proportions, technologically informed, a great amount of data, and it can be used to intimidate the public. And what you saw attacking Democracy Now! reporters is the pattern for the future.

AMY GOODMAN: I want to thank you, Robert Scheer, again, author of They Know Everything About You.

That does it for our show. A very special thanks to the folks here at KCETLink in Los Angeles and to Kim Spencer. We’re continuing our 100-city tour. Today we’ll be at Skylight Books in Los Angeles and Bookstar in Studio City tonight. I’ll be on Bill Maher’s show tonight on HBO. On Saturday, we’ll be in Santa Rosa, Willits and Redway; and on Sunday in Davis, Chico and Berkeley. Then we’re on to Salt Lake City on Monday, Idaho Springs, Colorado, on Tuesday. We’ll be in Colorado.

That does it for our broadcast. A special thanks to Charina Nadura and Juan Carlos Dávila, who were simply doing their jobs on the streets of New York last night. 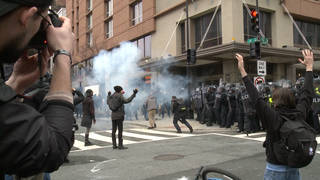