We are broadcasting live from Denver, Colorado, where in 2012 the state voted to legalize the recreational use of marijuana. Now 23 states and the District of Columbia have legalized marijuana for either medical or recreational use, and the cannabis industry is one of the fastest growing in the United States. But some have questioned who stands to cash in on the billions being generated by cannabis sales. Michelle Alexander, the best-selling author of “The New Jim Crow: Mass Incarceration in the Age of Colorblindness,” addressed the issue in a conversation with the Drug Policy Alliance, saying, “Here are white men poised to run big marijuana businesses, dreaming of cashing in big—big money, big businesses selling weed—after 40 years of impoverished black kids getting prison time for selling weed, and their families and futures destroyed. Now, white men are planning to get rich doing precisely the same thing.” We speak now to Wanda James, CEO of the Denver-based cannabis dispensary Simply Pure. She is the first African-American woman in Colorado to own a cannabis dispensary. She was inspired to start a dispensary by the experiences of her brother, who at 17 was locked up on a petty drug charge—and forced to pick cotton in Texas for four years to earn his freedom.

But here in Colorado, 2012, the state voted to legalize the recreational use of marijuana. Marijuana has become an established part of the economy here. There are marijuana dispensaries on many street corners. Now 23 states and the District of Columbia have legalized marijuana for either medical or recreational use, and the cannabis industry is one of the fastest growing in the U.S. But some have questioned who stands to cash in on the billions being generated by cannabis sales. Michelle Alexander, best-selling author of The New Jim Crow: Mass Incarceration in the Age of Colorblindness, addressed the issue in a conversation with the Drug Policy Alliance.

AMY GOODMAN: The Marijuana Arrest Research Project reports, between 2001 and 2010, Colorado police made 108,000 arrests for marijuana possession. African Americans were more than 10 percent of those arrests, but are less than 4 percent of Colorado’s residents.

AMY GOODMAN: It’s great to have you with us.

AMY GOODMAN: I mean, for people hearing that you are publicly saying that you own a pot dispensary, explain the alternative reality here in Colorado compared with everywhere else.

WANDA JAMES: Sure. I have been publicly saying we own a dispensary since 2009. So, this is not new to us. And we became part of this pot industry or cannabis industry because of social justice. We wanted to be able to step out and talk about this in political terms and to be able to bring normalcy to the idea that cannabis is a part of the American lifestyle and the American fabric. So this is something that I’m very proud about. Of all the things I’ve done in my life, I would say this is probably the thing that I find the most [inaudible].

AMY GOODMAN: So how does it work? How does your dispensary work?

WANDA JAMES: Well, like any other retail operation that you would go through, you’ve got to be licensed by the state. You’ve got to work within the realm of the rules and the regulations, which are many. But, you know, over the age of 21, you can come into a dispensary, show us your ID, and you can buy cannabis and cannabis-infused products.

AMY GOODMAN: So you’re talking not only about actual marijuana, but you specialize in edibles.

WANDA JAMES: Yes. Simply Pure was an edible company in 2010. It’s now a dispensary. But yeah, my husband is one of the best-known—Scott Durrah, one of the best-known cannabis chefs in the country. So, he cooks for people having end-of-life issues, and he also cooks for people who are having great time with recreational festivities, such as weddings and birthday parties and all different types of—

WANDA JAMES: Exactly. All meals. I mean, anything that you eat, we can infuse.

AMY GOODMAN: So, now talk about the disparities between marijuana arrests and sentencing for people of color—

AMY GOODMAN: —outside of Colorado, and what this means, and who profits from marijuana sales.

WANDA JAMES: So this is the absurdity that I think people really need to understand what’s happening here, is America needs slave labor. Since the dawn of America, since it began, we have had a slave labor class. What we see now is the privatized prison system. I won’t get into a whole lot of details, but if you can name a corporation right now, they are profiting off of labor, enslaved labor, given by privatized prison systems. To fill those spots, they need to be able to put bodies into those prison systems. And those bodies right now are being collected on the streets of America through cannabis arrest. We’re seeing last year alone that 701,000 people were arrested for simple possession of cannabis. Of those 700,000 people, four times—you are four times more likely to be arrested if you are black. So, when you start to look at the fact that you are being targeted as a people for these arrests to become part of the prison system, to be able to work into slave labor, it becomes extremely concerning.

AMY GOODMAN: Can you talk about what happened to your brother, Wanda James?

WANDA JAMES: Yeah. At 17 years old, my brother got caught with four-and-a-half ounces of cannabis. He was in Texas. He never saw an attorney. He and his mother went in front of the judge. The judge made my brother a felon. My brother spent four-and-a-half years picking cotton for free in Texas. I always stop on that note, and I say it again, that my black brother, my black 17-year-old brother, spent four-and-a-half years picking cotton for free in Texas to gain his freedom. That was in 1992, not 1892. This is absurd to me. And when we discovered this, I became incensed by it, because as a student on the campus of the University of Colorado, we smoked cannabis regularly. We smoked it in front of CUPD, that just told us to put it away. “Put it away, kids,” you know? “Put it away.” I didn’t even know, until I met my brother at 35, that people were actually arrested for cannabis. In my world, in my wealthy world of lawyers and doctors and college-educated people, we don’t go to jail for cannabis. Everybody else does. Seven hundred thousand arrests last year for cannabis possession.

AMY GOODMAN: If you have a criminal record for marijuana, how does that impact your ability to enter the industry?

WANDA JAMES: You can’t. You have to be 10 years removed from any kind of a drug felon. Now, you can have other felonies and other issues with the law, and still own dispensaries in Colorado; however, you can’t have any drug felonies. It’s become extremely difficult to get into the industry. And I have to also point out that the negative perception given to people of color through churches and through our elected officials also helps stop people from wanting to be involved in this industry, which is another travesty, that we are once again being left out of this brand-new industry, and one of the largest industries that we’re going to see in this country.

AMY GOODMAN: Talk about the Denver City Council moving to restrict new pot businesses in the city. What sparked that? What are your thoughts?

WANDA JAMES: What sparked that was they said that there were too many marijuana grow facilities in poor neighborhoods. However, Denver City Council is the one that controls zoning, and they are the one that told us where we had to be and where we were allowed to grow. So, then, five years later, they figured that are too many there, even though that these organizations had been good neighbors, have cleaned up the area, have hired people, have hired people for higher-wage jobs, which is always a positive in this industry.

AMY GOODMAN: The black community in Colorado, its position on pot legalization in—

WANDA JAMES: I mean, I can’t speak for the entire black community, but I will say the response to me and people wanting to work for me is overwhelming. I get letters daily from people wanting to be a part of the industry, wanting to be working in our dispensary, from college-educated people to people that are just starting out.

AMY GOODMAN: Can you, finally, talk about the role of women, particularly black women, in this white male-dominated industry?

WANDA JAMES: It’s almost nonexistent for black women. There are few to none. I’ve asked the question many, many times of how many black women actually own dispensaries, and I can’t seem to get that answer. So, it is an extremely limited number. However, women in this industry are coming full circle. We’ve seen about 36 percent of the management positions in this industry are women. We’ve got probably about a 20 to 22 percent ownership in this industry, or in Colorado, of women-owned businesses in the marijuana industry.

AMY GOODMAN: Wanda James, I want to thank you for being with us. 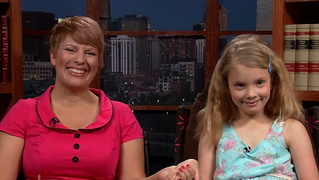